The case for telling everyone what you make 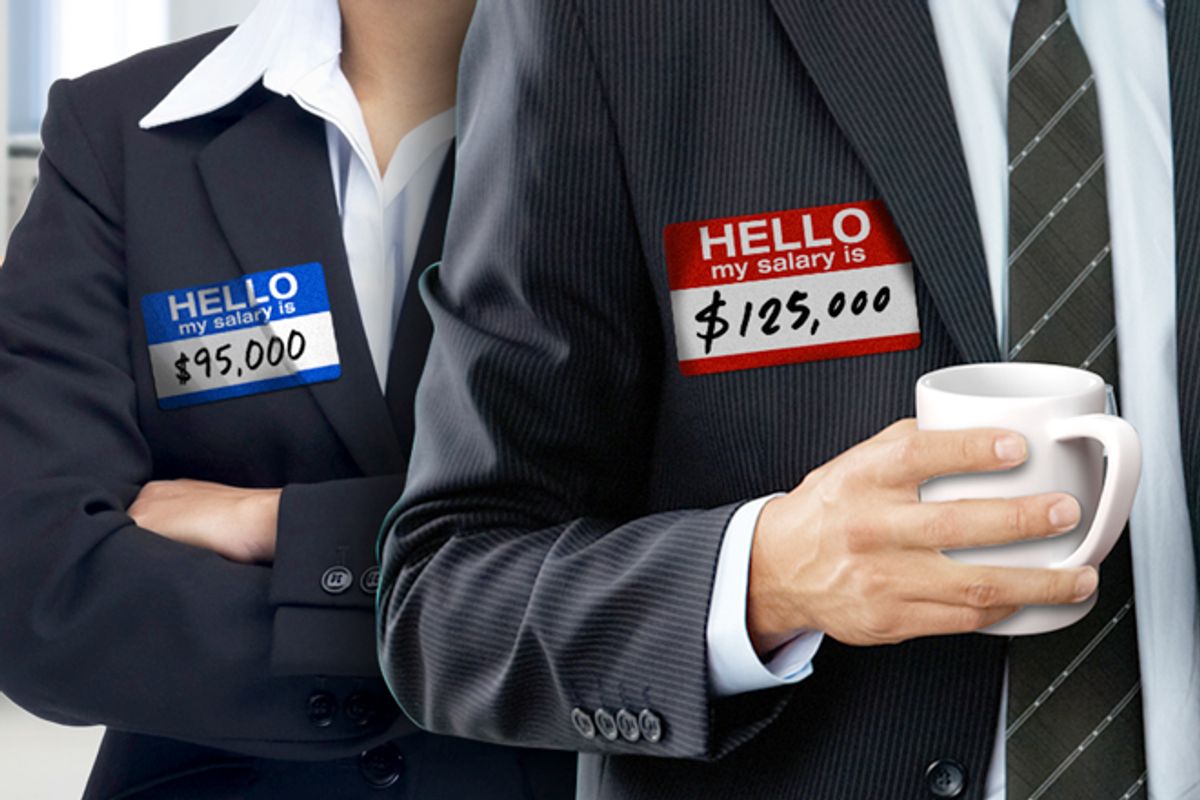 Terri Kelly loved everything about her job as a sales representative at the pharmaceutical company Novartis, except for one thing: She knew she was getting paid less than a man with exactly the same position and achievements.

At one point, she and this man, hired around the same time, were ranked, respectively, fifth and fourth among the best-performing sales reps in the nation. But over the course of nine years, he was earning as much as $12,000 more a year than she was – cumulatively, $65,000 more.

Two things made Kelly unusual: She’s married to that better-paid sales rep and had been since before they worked for Novartis. Novartis, Kelly told Salon, had a policy on the books preventing employees from discussing their wages. “If it had been anyone but my husband,” she said, “I would have been in trouble, as would the person who shared it.”

According to a survey by the Institute for Women’s Policy Research, 19 percent of employees’ workplaces formally prohibit discussing wages and salaries, and another 31 percent said it’s discouraged. That survey’s analysis pointed out that the wage gap in the federal government, which has high levels of pay transparency, tends to be narrower than the private sector's, though that figure is skewed by the fact that higher earners in the private sector – say, in finance – sit atop a much higher range and tend to be mostly men.

A New York jury eventually found that Kelly and eleven other former sales reps had been victims of gender discrimination related to pay, promotion, and pregnancy discrimination, and it awarded them $3.36 million plus a record $250 million for 5,600 other women in the class-action lawsuit. But, said Katherine Kimpel, a lead attorney on the case, “Out of the thousands of women we represented, Terri was the only one who was able to speak about direct knowledge of pay discrimination.”

Yesterday, Kelly testified before Congress in support of the Paycheck Fairness Act – set for a Senate vote next week – which has a provision making it illegal for companies to retaliate against employees who discuss their salaries. (It previously passed the House but failed by two votes to get a filibuster-proof Senate passage.) While the Lilly Ledbetter Fair Pay Act restored the length of time in which an employee could sue for discriminatory pay, it did nothing to change the fact that employees often are barred from learning they’re being discriminated against. (Discussing pay was against the rules at the Goodyear plant where Ledbetter worked -- she found out from an anonymous note).

It’s a Catch 22: Often, you have to get to litigation to even find out about discriminatory pay. “Women will come to us articulating pregnancy or promotion discrimination claims, disparate treatment, hostile work environment – anything but pay discrimination,” Kimpel says. “More often than not, if we ask them about their pay, they always say it’s okay.”

That can change during the legal process. Kimpel says that in one pay discrimination case her firm was litigating, the company put up as a witness a female employee who said she’d always been fairly treated. Awkwardly, it emerged during discovery that not only had the company been systematically underpaying that witness compared to men in the same position, they had openly acknowledged it to each other.

Kelly, too, had her mind changed by what she learned from her colleagues in the case. “When I started working for Novartis, I was 25 years old, and at that age, you want to believe that everything is good and right in the universe,” she says. “You don’t want to believe that things like pay discrimination can happen.”

At the same time, a recent analysis by University of Maryland law professor Deborah Thompson Eisenberg found that courts of the past decade have been the most hostile to equal pay claims since the early days of being able to sue over it. "From 2000-2009, employees prevailed on their equal pay claims 35 percent of the time," compared to 55 percent between 1990-99 and similar rates in earlier decades. And though "evaluation of equal pay claims is supposed to be fact-intensive," meaning it would benefit from discovery, Eisenberg found that between 1999 and 2009, federal courts granted summary judgment to the employer 72 percent of the time. In other words, courts have generally been reluctant to intervene in a company’s decision to pay someone less, operating on the assumption that the market is working.

And yet the wage gap persists, even after adjusting for other variables, which narrows but doesn’t eliminate earnings disparity between men and women. A 2007 American Association of University Women study found that a year after graduating from college, women earned 80 percent of what men did, and over time the gap widened. Even after adjusting for “college major, occupation, industry, sector, hours worked, workplace flexibility, experience, educational attainment, enrollment status, GPA, institution selectivity, age, race/ethnicity, region, marital status and number of children,” there was an unexplained 5 percent gap. Another study was able to truly compare like for like: It followed 43 transgender people, finding that women who became men saw their earnings rise, while men who became women earned almost a third less.

The Paycheck Fairness Act wouldn't just make it easier for employees to discuss salary -- it would also raise the bar for the justifications that employers give for paying men and women differently, restore Labor Department reporting that was phased out for budgetary reasons, and provide funds for various programs to train EEOC employees about wage disputes and women in the workforce about negotiating skills. But as long as the Paycheck Fairness Act remains a liberal cudgel rather than a pending reality, and as long as the courts are increasingly skeptical, other remedies will have to be found. In her paper “Money, Sex, and Sunshine: A Market-Based Approach to Pay Discrimination,” Eisenberg argues that better pay transparency can move the needle.

She proposes taking a page from the analyses of executive compensation – where it’s long been acknowledged that market-distorting forces, including "human dynamics, unconscious biases, and social factors” skew the market – and making wages more transparent to begin with. “Pay secrecy compounds and conceals the problem,” she writes – whether it’s because managers implicitly think work done by women (especially women of color, for whom the pay gap is far wider) is worth less, or because the female employee started out by asking for less or was reluctant to ask for a raise.

Even if the Paycheck Fairness Act fails to get past this Senate, says Deborah J. Vagins, senior legislative counsel at the ACLU, the president could sign an executive order forbidding any federal contractors from retaliating against employees who discuss wages. And Sarah Jane Glynn, a policy analyst at the Center for American Progress, says that the Paycheck Fairness Act at least can make wage secrecy “part of the national conversation. It encourages women to think about this – and maybe be more proactive in terms of negotiating their starting salary.”

Unfortunately, wage transparency can only take you so far – you also have to have leverage, no easy feat in this economy, as Linda Barrington, Managing Director of the Institute for Compensation Studies at Cornell University's School of Industrial and Labor Relations, points out.

“Transparency has allowed CEOs to keep raising their salaries, but at the bottom end we have such a surplus of labor that there’s no bargaining power,” she says. “It always comes down to, how much bargaining power do individuals have to raise their earning power? If you ask and you have no power, it’s not going to matter.”