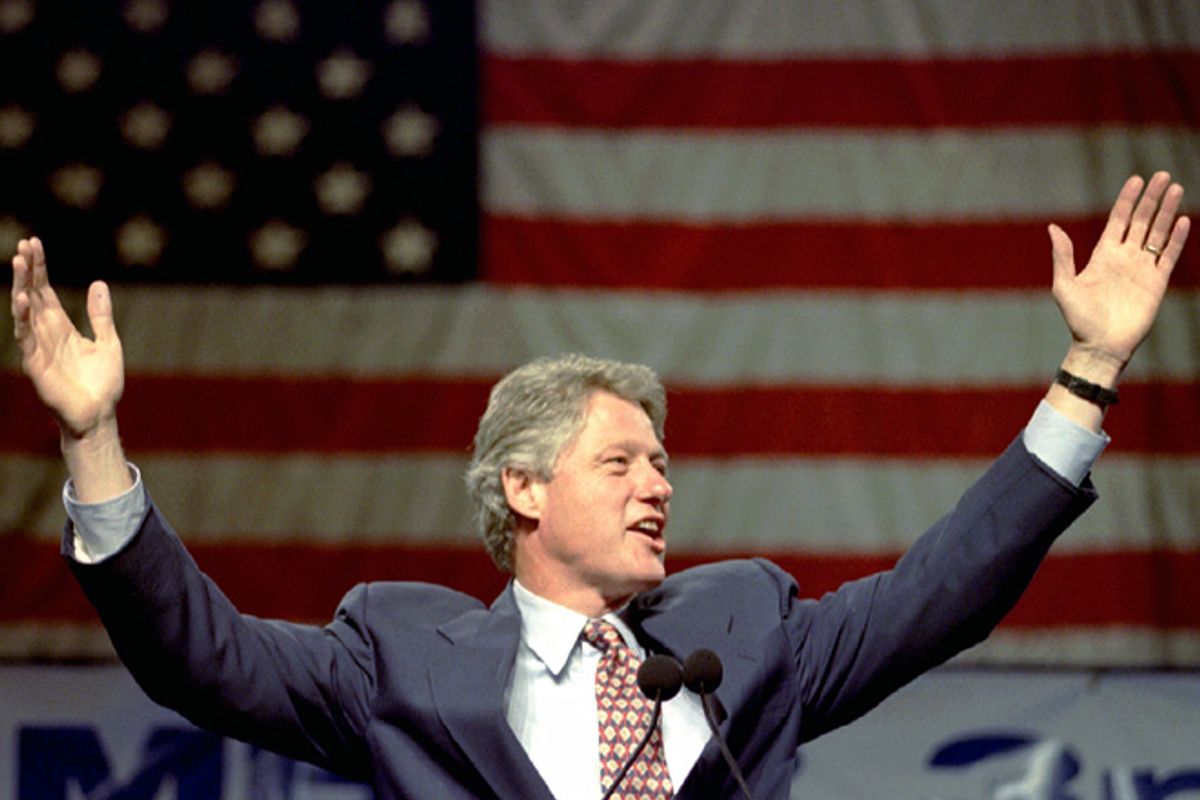 Pretty much from the moment Barack Obama became the likely Democratic nominee four years ago, the right began creating a revisionist history of Bill Clinton’s presidency.

When it actually played out in the 1990s, Republicans challenged Clinton’s legitimacy, obstructed his agenda, belittled his character, forced a government shutdown and impeached him. This wasn’t that surprising; it’s just how the right tends to respond when Democrats claim the White House. This was as true under John F. Kennedy and Lyndon Johnson in the 1960s as it is today under Obama.

The shift to Obama as the new sworn nemesis created a new role for Clinton in conservative folklore. No longer was he a lying, scandalized, illegitimate president whose incompetence led directly to 9/11; now he became a model for moderate, responsible and pragmatic presidential leadership – a legacy to be invoked as a means of portraying the current Democratic president as dangerously to the left of his own party’s tradition.

This is the effect that Mitt Romney was going for a few weeks ago when he lamented that Obama had “tucked away the Clinton doctrine in his large drawer of discarded ideas.” It’s what Artur Davis, the one-time rising Democratic star who flamed out in Alabama and his now reinventing himself as a Virginia Republican, was going for when he wrote this week that “this is not Bill Clinton’s Democratic Party (and he knows that even if he can’t say it).” And, as Ed Kilgore notes, it seems to be what the Weekly Standard’s Jay Cost is going for when he backs up Davis’ claim by arguing that the Democratic Party "was never really Bill Clinton’s party."

Cost makes a few claims that are worth exploring. One involves how Clinton became the Democratic nominee in the first place:

He was far from the consensus choice of the party in 1992. In fact, most of the major interest groups that dominate the party today either opposed him or were lukewarm to his candidacy in 1992. What put Clinton over the top that year was his domination of the Southern primaries, thanks in large part to the sorts of white, working class voters who now call themselves Republicans.

But it’s more complicated than that. Clinton did come to the 1992 race with a reputation as a “new Democrat,” a centrist Southerner who’d run the Democratic Leadership Council. Initially, he planned to play these credentials up in his primary campaign, believing that his main opposition would come either from Mario Cuomo or Tom Harkin. But when Cuomo balked at running and Harkin failed to ignite, Clinton instead found himself battling Paul Tsongas and his Wall Street-friendly message.

Adroit politician that he is, Clinton then ran as the defender of the party’s New Deal/Great Society coalition. He did clean up in the Southern primaries, but the most important part of his base was African-American Democrats – same as it would be for Obama 16 years later.  In Georgia, for instance, Clinton beat Tsongas by an overall 57-24 percent spread, his first win of the ’92 primary season. Among blacks, his margin was 74 to 14 percent. Among whites, he earned only a slight majority. As a column in the Atlanta Journal-Constitution put it at the time:

Mr. Clinton won more than 70 percent of the black vote. But he won only 53 percent of the white vote. That's a majority, but it's only a majority of those who asked for a Democratic ballot. It's a decided minority of the white Georgians who voted Tuesday. Some exit polls showed a quarter of those who voted for Mr. Clinton intending to vote for Mr. Bush in November. In short, the Arkansan beat Paul Tsongas, a complex candidate from Massachusetts, and three other rivals who almost didn't bother to campaign here and who didn't buy television time.

In other key primaries, Clinton rallied senior citizens in Florida with Social Security-themed attacks on Tsongas and used strong labor support to score the commanding Illinois and Michigan victories that knocked Tsongas out. Some white Southerners who are now Republicans were part of Clinton’s coalition, but he mainly relied on a very traditional Democratic coalition to win the nomination.

As president, Cost claims, Clinton “offered a reformist agenda to Congress, but the congressional liberals stymied him in 1993-94.” One item he cites here is deficit reduction – a reference to the 1993 budget that Republicans unanimously opposed (and attacked as “the largest tax increase in history”). But the tax hikes weren’t at all a break with what Clinton campaigned on. In language that Obama himself might use today, Clinton spent the ’92 general election bemoaning that under Ronald Reagan and George H.W. Bush “the rich got richer” while the middle class fell behind. With Republicans claiming class warfare, he vowed to raise taxes on those earning over $200,000. At the 15:20 mark of the first fall debate, for instance, you can watch Clinton making the case for taxing the rich:

Clinton did have to abandon his middle class tax cut campaign pledge, but it wasn’t liberals who forced him to – it was Alan Greenspan and deficit hawks like Tsongas. Far from stymying him, liberals were essential to the enactment of the ’93 budget, which in turn played a major role in the massive surpluses that would emerge by the decade’s end.

Cost is certainly right that there was liberal disaffection with Clinton throughout his presidency – whether on NAFTA in 1993 or welfare reform in 1996. But there was never anything approaching an intraparty revolt. Knee-jerk predictions that Clinton would face a serious ‘96 primary challenge after the disastrous 1994 midterm never amounted to anything, and his support from the party’s base remained healthy throughout his term. By the time he left office, a few liberals considered him a traitor, some were thrilled with his performance, and most were generally pleased but wished he’d been more ambitious and achieved more. (That last sentiment was the foundation for Bill Bradley’s and Ralph Nader’s 2000 campaigns.)

The right’s new caricature of Clinton as the voice of a conservative Democratic wing that no longer exists is as inaccurate as its old one. He was, and is, a complicated politician, skilled at tailoring his ideology to mesh with his target audience of the moment. As president, that trait enraged liberals and conservatives alike. It’s still unclear where, if anywhere, Clinton personally fits on the ideological spectrum. But in the 1990s he campaigned and governed as the leader of a Democratic Party that is very much recognizable today.

Update: I shouldn't have lumped Cost in with Romney and Davis the way I did. As I made clear above, I don't think his take on Clinton's legacy is right at all, but he's a smart and informed writer and it was wrong to imply that he's actively trying to distort history.