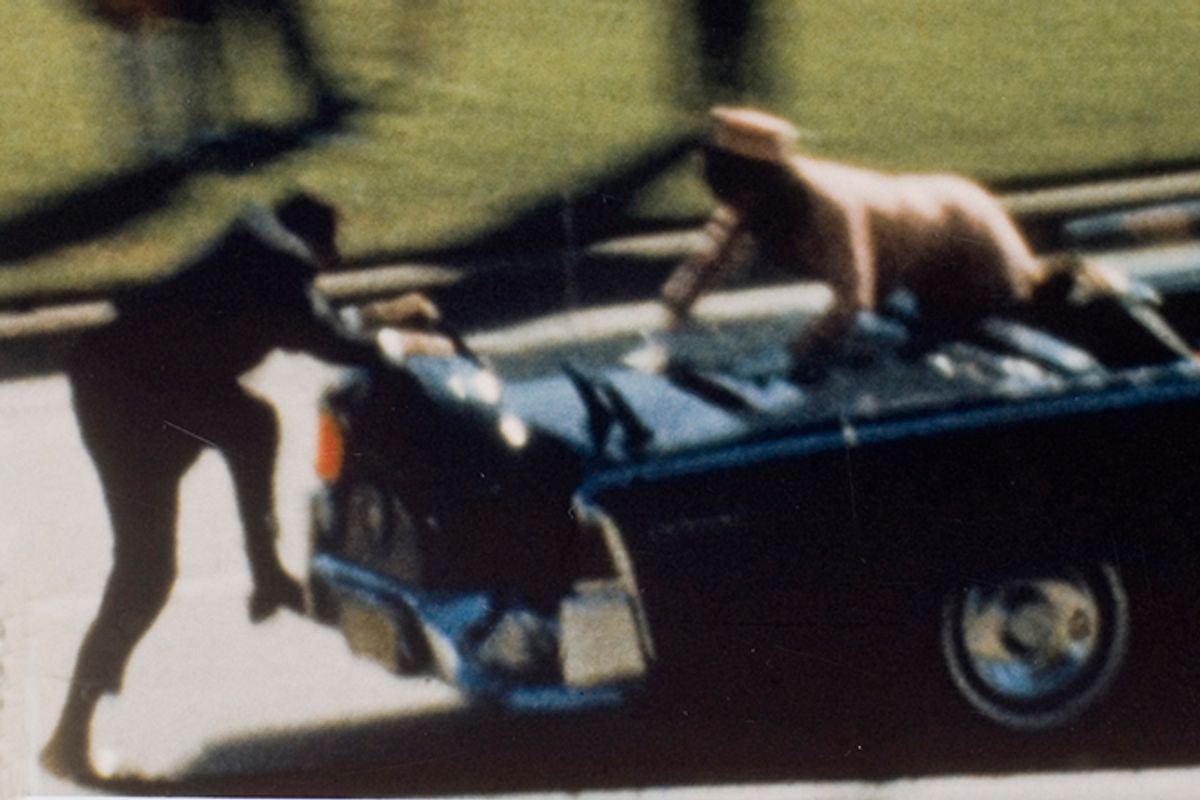 Next year will be a half-century since the death of JFK. And the Obama Administration thinks we need to keep secret the records on the matter … a little longer yet.

Believe it or not, more than 50,000 pages of JFK assassination–related documents are being withheld in full. And an untold number of documents have been partially withheld or released with everything interesting blacked out. But why?

Since the government and the big media keep telling us there was no conspiracy and that it was all Lee Harvey Oswald acting on his own, why continue to keep the wraps on?

We don’t have an answer, but in understanding this and any number of other mysteries, we can begin looking for patterns in the way the administration handles information policy.

Earlier this year, the National Archives and Records Administration (NARA) asked, on its online Open Government Forum, for suggestions from the public about what it could do to create greater transparency. The #1 most popular idea? Get those Kennedy records out — before Nov. 22, 2013, the fiftieth anniversary of the Dallas tragedy.

But instead of dealing honestly with this matter, the feds have resorted to disinformation. In an interview with the Boston Globe, the Archivist of the United States claimed that at two public forums held on open records, the most public comments came from people interested either in the JFK assassination or … in UFOs.

Except for one thing: James Lesar, an attorney and co-founder of the Assassination Archives and Research Center (AARC), a D.C.-based nonprofit that has fought a long and valiant fight on behalf of the public interest in disclosure, attended both of those forums and says that, as he recalls, there were no people there asking about UFOs, or that at most it was of negligible interest. In fact, a look at NARA’s online idea forum (now closed) showed no UFO proposals or comments.

So, what’s with claiming otherwise? One could be excused for seeing in the Archivist’s statement a deliberate, and unworthy, attempt to smear the legitimacy of JFK inquiries by trying to make them appear “kooky.” (Not to judge the merits of the idea that there could be life elsewhere in the Universe, but the term “UFO conspiracist” is a well-worn dysphemism.)

Here’s what actually happened at the NARA forums.

The first was held in 2010. The assistant archivist, Michael Kurtz, said that withheld JFK assassination records would be processed, along with other documents, for declassification — and that the process should be completed by the end of 2013.

But by 2011, Kurtz, who had been at NARA for decades, had retired. At the 2011 forum, Jim Lesar was told that JFK assassination records are not part of the declassification process. Hence, they will not be reviewed for release.

For some perspective, meet Sheryl Shenberger. She’s the head of the Archives’ National Declassification Center. What would you guess Sheryl’s professional background would be? Library of Congress? Academic research? Nope. Before NDC, Sheryl worked for … the Central Intelligence Agency.

The most logical and reasonable explanation for this is that the Obama administration placed an ex-spook in charge of declassification because this would induce her old colleagues in Langley to cooperate. (Which of course raises the question of whether, in a real democracy, you would want to have a bunch of people secretly deciding to do whatever they wanted with 50-year-old documents pertaining to a supposed loony loner who whacked a president.)

Frustrated by the administration’s foot-dragging on JFK, AARC sent a letter urging the government to get off its duff. One signer was G. Robert Blakey, who served as a Chief Counsel to the House Select Committee on Assassinations (which in its 1978 final report said that, um … it looks like an organized conspiracy was responsible for JFK’s death.)

ARRC’s letter was dated January 20, 2012. According to Lesar, there has still been no reply — though NARA says it is working on it.

Release of the remaining documents, under the President John F. Kennedy Assassination Records Collection Act of 1992, can be postponed until October 26, 2017. Not so bad, you say? Actually, the Act further states that even in 2017, the president may decide to drag this on further, by withholding records indefinitely.

Records activists expect the CIA to petition for just such a decision. Any bets on President Hillary or President Mitt — or, quite possibly, President Jeb Bush, doing the right thing? What about all the secrets Jeb’s father has to hide?

One of the problems is that we’re being asked to trust these folks at all. Even the number of documents being withheld — 50,000 — is a guess. At the 2010 public forum, Asst. Archivist Kurtz said that only about one percent of the five million pages had been withheld. Now the government is likely to say the number is even smaller. But think about it: What would they withhold, except the stuff that really tells us something important? So whether it is 50,000 or 500 documents, it appears that government officials are hiding something, and they’re not about to give it up.

One of the many wonderful spook tricks is to designate files as “Not Believed Relevant.” Among those so designated when the House Assassinations Committee investigated in the 1970s, we later learned, were files on the Soviet defector Yuri Nosenko. He had claimed to have been in charge of the KGB’s Oswald files. Also branded were files on the Cuban Revolutionary Council, a CIA front group set up by the ubiquitous master planner E. Howard Hunt that was connected in multiple ways to the Oswald story.

“Not Believed Relevant”? We’ll take one of each of those documents, please.

Amazingly, the CIA under George W. Bush may turn out to be more compliant than Obama’s “open government” advocates. In 2004, on Bush’s watch, the agency voluntarily agreed to accelerate the release of postponed JFK assassination documents, and it did indeed release some early.

By contrast, in the spring of 2012, three D.C. attorneys with long experience in litigating Freedom of Information cases expressed their disappointment with Obama in an opinion piece. They noted that the Department of Justice under Eric Holder seems willing to go to bat for any and every agency and department that wants to withhold information.

On his first day in office, President Obama signed a government-wide directive — widely reported by the media — establishing a whole new level of commitment to openness and transparency. The administration has made some real strides. But arguably not on the most sensitive — and hence most important — matters.

On April 9, federal agencies were supposed to post updates to their Open Government Plans, this according to Cass Sunstein, administrator of the Office of Information and Regulatory Affairs, writing on the White House blog. Some agencies, including the Environmental Protection Agency, did so. But others, such as the Department of Labor , did not — and still have not. NARA is one of those that has not complied.

As the expression goes, sunshine is the best disinfectant. Opening up the nooks and crannies of government to public view was supposed to aid the process of discovering and rooting out the rot. This would, we were assured, help return Washington to the people. Obama selected Sunstein, a Harvard professor and old friend, to oversee this effort.

Not long ago, when I asked to discuss this with Sunstein, I was told he was “not available” for interviews.

Mr. Sunstein, wonder if I might be able to do a phone interview with you about Open Records policy?

Unfortunately, Administrator Sunstein is unavailable for an interview.  That said, you might try the Archivist of the United States at NARA?  Best of luck!

Is he generally unavailable for interviews? What is the policy on that? Seems relevant given that this is about open government.

No, he’s not generally unavailable—but the Archivist is intimately involved in one of our big open government initiatives (records modernization), so he’s just a particularly good person to speak to on this.

So the person in charge of the overall governmental effort on open records wants me to talk to the person running one of the agencies that is … having difficulties complying with the spirit if not letter of Obama’s announcement.

No Mr. Sunshine, That Mr. Sunstein

Actually, Sunstein has good reason to lay low. Watch this slightly raw video  of someone confronting him about a paper he wrote a few years ago. In it, he actually advocated for “cognitive infiltration” of groups that espouse alternative views on controversial issues like the events of Sept. 11 (i. e, conspiracy theories).

Here’s a quote from Sunstein’s paper:

[W]e suggest a distinctive tactic for breaking up the hard core of extremists who supply conspiracy theories: cognitive infiltration of extremist groups, whereby government agents or their allies (acting either virtually or in real space, and either openly or anonymously) will undermine the crippled epistemology of those who subscribe to such theories. They do so by planting doubts about the theories and stylized facts that circulate within such groups, thereby introducing beneficial cognitive diversity.

Sunstein is a sort of caricature of everything people don’t like and don’t trust about government. The fact that he’s in charge of “open government” speaks volumes.

Apparently not a great enthusiast for the Freedom of Information Act, Sunstein has said that judges are not qualified to second-guess executive branch decisions on what the public should or should not be told.

In light of this record, it’s useful to consider Sunstein’s broader mandate: to make government more efficient and accountable. Releasing records involves, in part, cutting red tape. Another aspect of cutting red tape is getting rid of bureaucracy. And that’s where things get even more interesting. Under cover of making government more accountable, Sunstein gets to push for elimination of regulations that corporations find onerous. Here’s a Washington Post article on Sunstein holding up (for more than a year) food safety legislation that the industry doesn’t like.

What’s going on here? Why the seeming shift away from Obama’s initial commitment to openness? One attorney involved with these matters says he suspects this may be traceable to Obama’s order, shortly after he took office, to release many of the so-called “torture memos.” The President seemed taken aback by vociferous public demands that he prosecute the torturers — a perilous policy due to internal resistance — and quickly shifted to favoring the intelligence community and restricting disclosure. As the attorney points out, the broader concept — that transparency leads to public awareness, which in turn leads to demands for political changes — certainly does not sit well with dominant sectors in this country. Obama has hardly distinguished himself for seriously taking on those sectors. Maybe because he doesn’t want to, maybe because … he can’t. (For more on this, see our 2010 piece, “What Obama Is Up Against.”)

NARA is now saying that the White House gave “small agencies” (meaning NARA) a June deadline for publishing its revised open government plan. But no White House postings support that claim. In any case, even if and when NARA becomes more responsive, don’t bet on the government releasing the most valuable JFK-related documents … in your lifetime.

By the way, here’s more on the new head of the Archives’ declassification center: “Ms. Shenberger served as a Branch Chief in the CIA Counter Terrorism Center between 2001 and 2003” before being assigned declassification work for the Agency.

That’s very interesting — since one gets the sense that the Agency is not eager to release inside dope on the government’s astounding failures relating to one particular date in 2001.