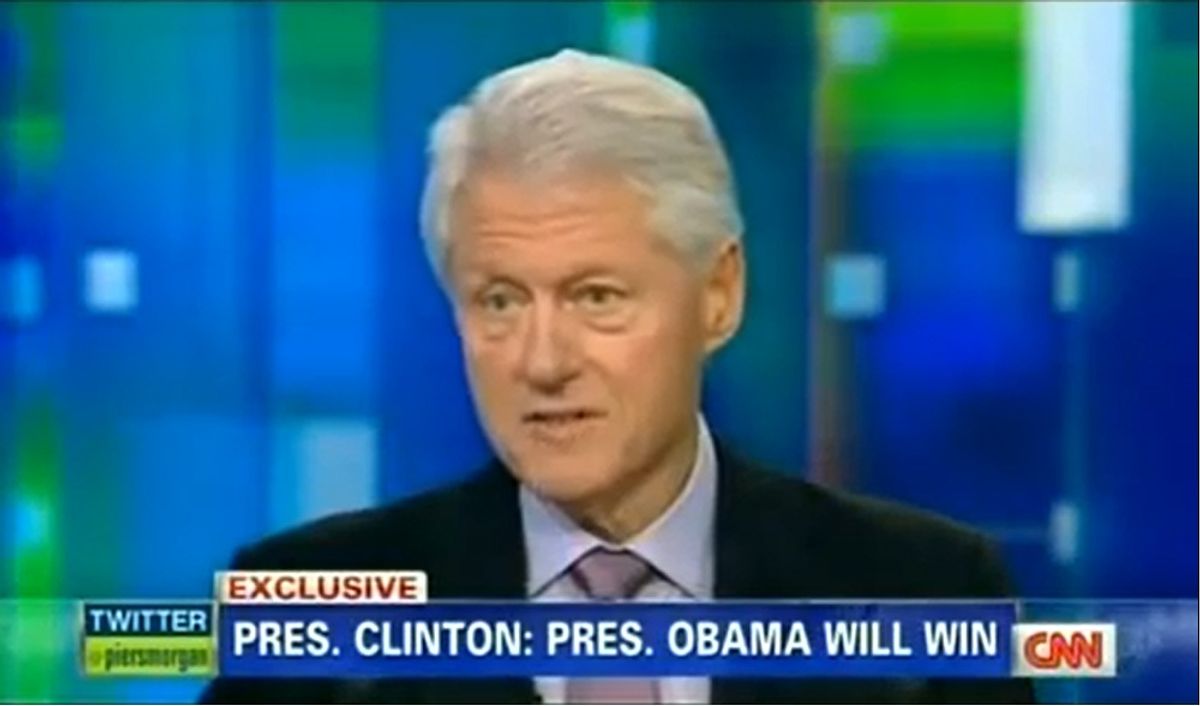 Well, this will get some play today: In a CNN interview with Harvey Weinstein (?!) last night, former President Bill Clinton spoke up for Mitt Romney’s “sterling business record” and said his background meets the “qualification threshold” for the presidency.

“I don’t think we ought to get in a position where we say this is bad work. This is good work. I think, however, the real issue ought to be: What has Gov. Romney advocated in the campaign that he will do as president? What has President Obama done and what does he propose to do? How do these things stack up against each other? That’s the most relevant thing.

“There’s no question that in terms of getting up and going to the office and, you know, basically performing the essential functions of the office, a man who’s been governor and had a sterling business career crosses the qualification threshold.”

In criticizing Mitt Romney’s past role at Bain Capital, the Obama team’s goal is to undermine his basic economic credibility with swing voters, among whom there’s an instinctive tendency to link success in the private sector with governing competence. That’s the same motive behind the Obama campaign’s new attacks on Romney’s gubernatorial record — to give pause to voters who now see Romney as a suitably qualified vehicle for their frustrations with the state of the economy and the incumbent president. There’s no getting around that Clinton’s comments won’t help this effort.

Still, let’s be clear what this does — and doesn’t — signify.

Presumably, Romney and the GOP will use this incident to advance their case that Obama’s presidency represents a giant, radical break with Clinton’s. Sentimentality for the Clinton years is a relatively new development on the right, one that sprouted up as Obama usurped Bill and Hillary as the face of the national Democratic Party. Among other things, it serves a tactical purpose, making the Republican argument against Obama sound more reasonable (We have no problem with a Democratic president —Clinton was great! But this guy …) and distracting attention from how far to the right the GOP has shifted in just the last few years.

But the Clinton’s CNN interview covered more ground than just Bain, and the overall tone of his remarks was friendly to Obama and consistent with the president’s reelection message — including his confident prediction of a five- or six-point Obama victory this fall. This was not an expression of some deep philosophical divide.

It was, however, a classic case of Clinton being Clinton. As a practical matter, he governed as the same pragmatic, incrementalist Democrat that Obama has been, but he also has a career-long tendency to try to soften his ideological edge before certain audiences, even if it means undermining his own party or contradicting himself.

A famous example from his presidency came in the fall of 1995, two years after Clinton had signed a budget that Republicans derided as “the largest tax increase in history.” In reality, it had only raised income tax rates on a tiny fraction of affluent Americans, and it would ultimately play a major role in the budget surpluses of the late ’90s, but when Clinton spoke to a wealthy crowd in Houston in ’95, it was still a sensitive political subject.

"Probably there are people in this room still mad at me," he said, "because you think I raised your taxes too much. It might surprise you to know that I think I raised them too much, too."

The reaction from Democrats was furious. Many of their own had lost seats in the 1994 midterms because of their willingness to vote for that tax increase.

"It just knocked us over when we saw that report this morning," Daniel Patrick Moynihan, who had helped craft the ’93 budget, said. "He keeps conceding these things. He doesn't understand that he's conceding the principles."

Moynihan continued, “He's running for reelection, he's raising money in Houston. What he should have said was, 'Is there a man in this room who's not richer than he was two years ago?'"

The White House tried to walk the comments back ("The president has absolutely no regrets about the deficit reduction plan he and the Democrats passed in 1993. None. And he didn't mean to leave any other impression.”), but Republicans had a field day crowing about Clinton’s supposed admission that his signature policy achievement had been a mistake.

It was the kind of moment that led Rep. David Obey, the liberal icon from Wisconsin, to say of Clinton: "I think most of us learned some time ago that if you don't like the president's position on a particular issue, you simply need to wait a few weeks."

That said, Clinton’s comments about Romney do reflect one significant change in the Democratic Party — and in America. In the Clinton years, there was a tight and lucrative (for both sides) alliance between the White House and Wall Street, one that Democrats — including Obama — continued to exploit well into the next decade. But that fund-raising connection may be drying up now. It’s not that Wall Street isn’t doing well (it is) or that Obama isn’t mindful of its concerns (just look at who he brought into his administration), but the same heavyweights that Clinton cultivated now apparently believe that they’re being scapegoated by Obama, who once criticized their outsized post-meltdown bonuses.

So while Obama’s Bain strategy may clash with the instincts that served Clinton well in the bubble years, it’s far from clear whether those same instincts are a good match for the world we live in today.