It's a myth that Americans spit on soldiers returning from Vietnam. So why did President Obama tacitly endorse it? 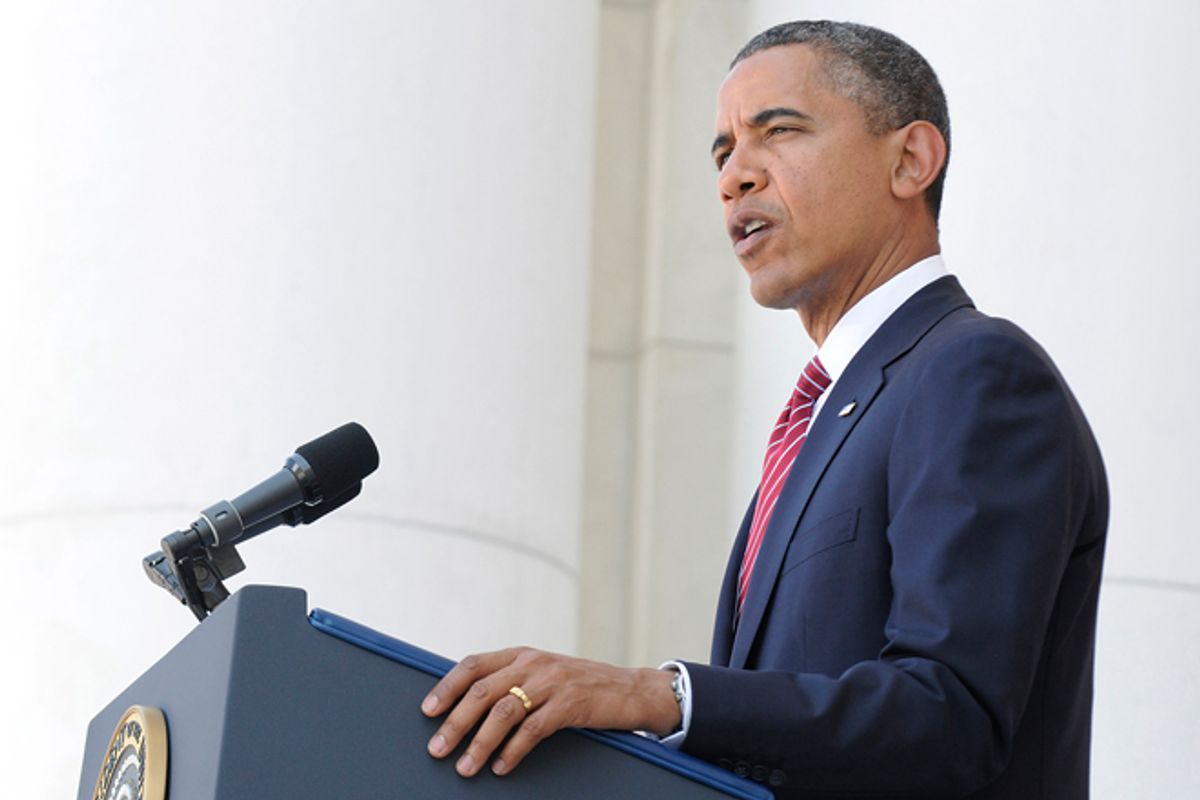 Out of all the status-quo-sustaining fables we create out of military history, none are as enduring as Vietnam War myths. Desperate to cobble a pro-war cautionary tale out of a blood-soaked tragedy, we keep reimagining the loss in Southeast Asia not as a policy failure but as the product of an America that dishonored returning troops.

Incessantly echoed by Hollywood and Washington since the concurrent successes of the Rambo and Reagan franchises, this legend was the central theme of President Obama's Memorial Day speech kicking off the government's commemoration of the Vietnam conflict.

It’s undeniable that chronic underfunding of the Veterans Administration unduly harmed Vietnam-era soldiers. However, that lamentable failure was not what Obama was referring to. As the president who escalated the Vietnam-esque war in Afghanistan, he was making a larger argument. Deliberately parroting Rambo's claim about “a quiet war against all the soldiers returning," he was asserting that America, as a whole, spat on soldiers when they came home -- even though there’s no proof that this happened on any mass scale.

In his exhaustive book titled "The Spitting Image," Vietnam vet and Holy Cross professor Jerry Lembcke documents veterans who claim they were spat on by antiwar protestors, but he found no physical evidence (photographs, news reports, etc.) that these transgressions actually occurred. His findings are supported by surveys of his fellow Vietnam veterans as they came home.

For instance, Lembcke notes that "a U.S. Senate study, based on data collected in August 1971 by Harris Associates, found that 75 percent of Vietnam-era veterans polled disagreed with the statement, 'Those people at home who opposed the Vietnam war often blame veterans for our involvement there'" while "94 percent said their reception by people their own age who had not served in the armed forces was friendly." Meanwhile, the Veterans' World Project at Southern Illinois University found that many Vietnam vets supported the antiwar protest, with researchers finding almost no veterans “finish(ing) their service in Vietnam believing that what the United States has done there has served to forward our nation’s purposes."

In the face of such data, why would the current president nonetheless repeat the apocryphal myth about spat-on Vietnam veterans? Because -- facts be damned -- it serves a purpose: to suppress protest and perpetuate the ideology of militarism.

This objective is achieved through the narrative's preposterous assumptions. Metaphorically, if not explicitly, the mythology equates antiwar activism with dishonoring the troops, implies that such protest is kryptonite to the Pentagon's Superman, and therefore insinuates that America loses wars not when policies are wrong, but when dissent is tolerated.

As political memes go, this 30-year Vietnam storyline has been wildly successful in helping presidents silence opposition to the Iraq War, the continued Afghanistan occupation, our expanding drone wars, and, of course, our ever-increasing defense budgets.

Yet, as much as the propaganda is cast as a genuflection to veterans, it's anything but. For one thing, it ignores the fact that many troops enlist specifically to defend our freedoms -- among them the freedom to dissent. Additionally, in manufacturing falsehoods out of the painful Vietnam experience, it insults many Vietnam vets by writing their opposition to that war out of history. Unchecked, the mythology ultimately uses the revised history of yesteryear's soldiers to vaporize the very dissent that might prevent tomorrow's soldiers from facing another Vietnam-like quagmire.

That's not respectful or supportive of veterans — it's the opposite.