Can Bill Clinton push two underdogs, one in Wisconsin and the other in New Jersey, over the top next Tuesday? 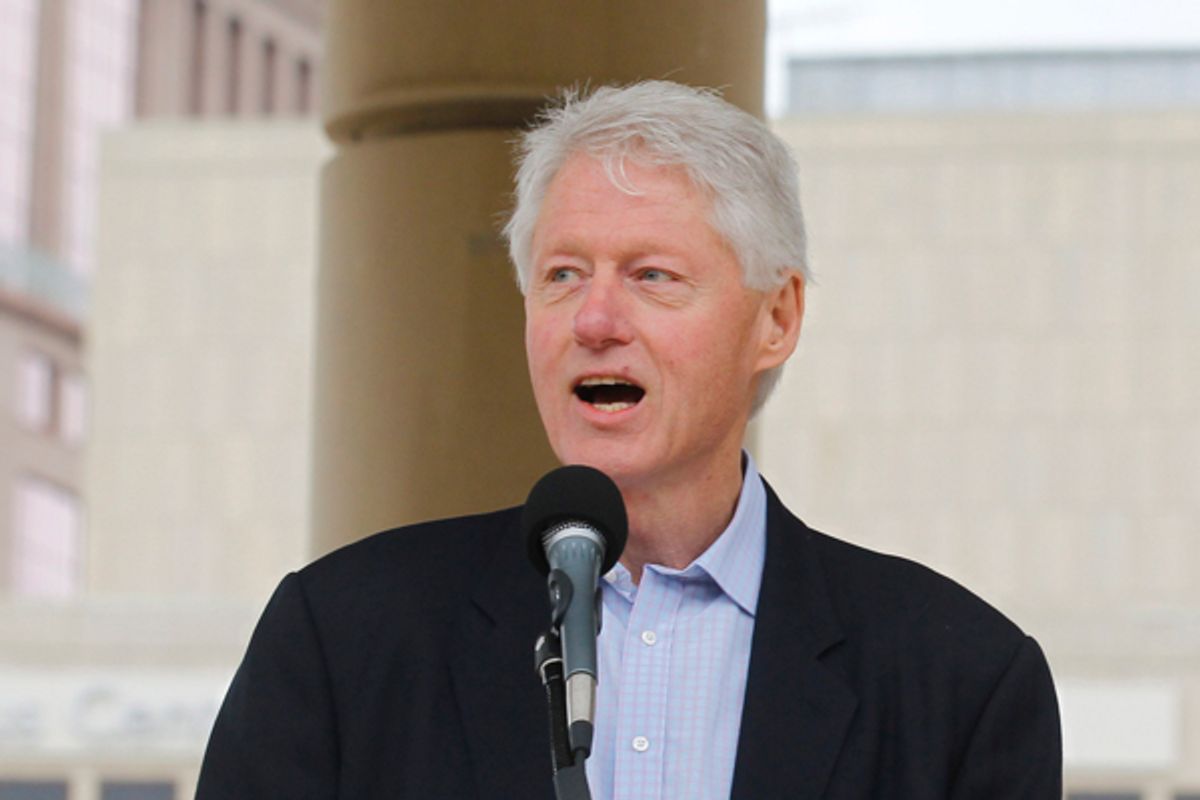 Next Tuesday is shaping up as a fascinating test of Bill Clinton’s political clout. The former president is spending today campaigning on behalf of two underdogs, each in need of a late jolt of momentum, and if either of them ends up prevailing, the Big Dog stands to reap a lot of credit.

A short while ago, Clinton rallied the faithful in Wisconsin, framing the recall of Gov. Scott Walker as a necessary step toward healing the bitterly divided state.

“If you want Wisconsin once again to be seen by all of America as a place of diversity, of difference of opinion, of vigorous debate, where in the end people’s objectives are to come to an agreement that will take us all forward together, you have to show up for Tom Barrett on Tuesday!” he declared.

The final debate between Walker and Democrat Tom Barrett was last night, so Clinton’s visit was probably the last high-profile card that Wisconsin Democrats have left to play. Walker has enjoyed a clear mid-single-digit edge in polling, leaving Democrats to talk up their turnout operation and suggest that Tuesday’s voting universe will look much different than pollsters are assuming. But what they really need is a late shift in public opinion, something to push a small but critical chunk of the electorate in favor of the recall. On this front, the attention generated by Clinton’s swing is their best bet.

The second leg of the former president’s Friday travels will land him in North Jersey, where redistricting has pitted two right-term Democratic incumbents against each other in a primary.

Clinton has cast his lot with 75-year-old Bill Pascrell, a street-wise former Paterson mayor and self-described political “late-bloomer.” Clinton’s fondness for Pascrell dates back to 1996, when Pascrell waged what seemed like a quixotic bid against a freshman Republican only to ride the president’s reelection coattails to one of the year’s biggest House upsets.

But what really explains Clinton’s interest is Pascrell’s early and loyal support of Hillary Clinton in the 2008 presidential race. Well, that and the fact that Pascrell’s opponent was the sole New Jersey House Democrat to line up with Barack Obama in the run-up to the ’08 primaries.

That would be Steve Rothman, a 59-year-old Democrat whose Bergen County hometown of Fair Lawn was actually shipped to the district of Republican Rep. Scott Garrett during redistricting. The race against Garrett would have been a winnable, though very iffy, proposition for Rothman. State and national Democrats urged him to give it a shot, telling him that it would earn him a chit for a future bid for statewide office. But Rothman didn’t take the bait, figuring that even if he managed to beat Garrett this year, he’d be facing perilous reelection fights every two years going forward. So he moved to Englewood, where he once served as mayor, a town that – like the majority of his old district – had been merged with Pascrell’s.

With his Bergen base likely to account for about 60 percent of the ballots cast on Tuesday, Rothman entered the race as the clear favorite. But Pascrell has clearly won the campaign, recruiting Clinton for an endorsement and today’s visit, netting endorsements from the district’s two main papers (the Star-Ledger and The Record), and stirring a backlash against an unfair Rothman attack ad.

Rothman is countering the Clinton visit by playing up his ties to Obama. But there’s only so much he can do here. The White House won’t endorse in a Democratic primary between incumbents, and Rothman’s clout with the Obama team is a bit suspect anyway; when the ’08 primary race ended, Rothman lost a power struggle for control of the New Jersey Obama operation. David Axelrod made an appearance on his behalf a few weeks ago, and today Rothman was given an Oval Office meeting with the president – with a Rose Garden colonnade stroll for the cameras.

In the battle for media coverage, Clinton’s in-person visit will probably trump the Obama/Rothman photo op. The question is whether it will be enough to push the old man from Paterson over the top on Tuesday.