The price of tribal betrayal

Former GOP Rep. Bob Inglis talks to Salon about the mindset that drives the Obama-era GOP 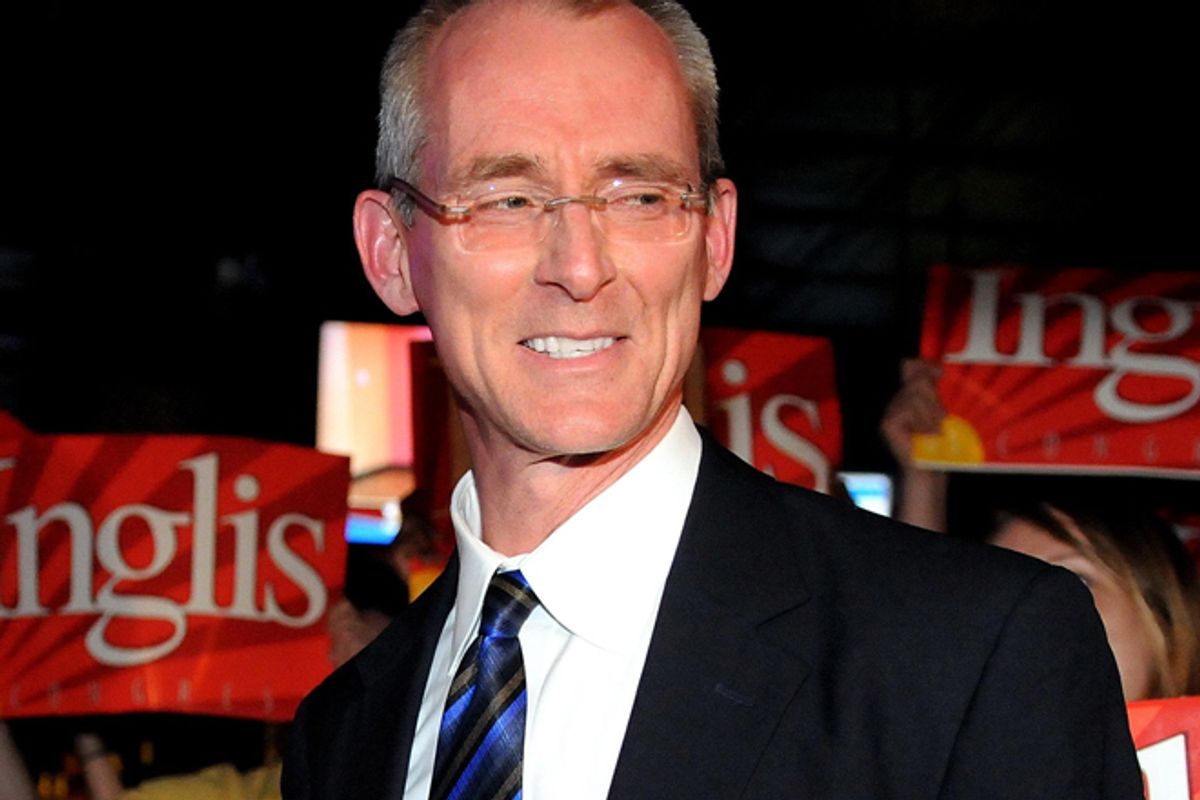 When Donald Trump hijacked the news this week with his latest birther ravings and Mitt Romney refused to repudiate him, Bob Inglis could only sigh.

The prevailing theory is that Romney, who shared the stage with Trump at a fundraiser Tuesday night, bit his tongue for fear of offending a Republican base that contains more than a few voters who are sympathetic to Trump’s views. Inglis knows all about that kind of pressure: He may be the signature victim of the intraparty revolt that has defined the Obama-era Republican Party, a one-time rising star with a deeply conservative voting record who was nonetheless defeated in a 2010 primary – by 42 points.

Elected to his second stint in the House in 2004, Inglis irked some on the right by casting a symbolic vote against the 2007 Iraq troop surge and signing off on George W. Bush’s TARP plan. But if there was one single act that marked him as a traitor, it was his suggestion to attendees at a rowdy 2009 town hall meeting to “turn Glenn Beck off.” Boos filled the air, the video went viral, and Inglis spent the next year on the defensive. He finished 12 points behind challenger Trey Gowdy in the preliminary GOP vote, 39 to 27 percent, then gained almost no ground in the runoff, which he lost 71-29 percent.

“I’m wondering, ‘Why is this happening?’” he said. “And what I came around to is that what happens is the tribe selects you to go to Washington. You believe with the tribe, you agree with them, and you go to Washington as their representative.

“Then you get there and you mingle with these other tribes, and you come to understand their point of view – not agree with it, but understand it. So when that view is presented, you don’t have the same sort of shocked reaction that some of the tribe members at home have to hearing that view.”

He recalled getting to know John Lewis, the civil rights icon and Democratic congressman from Georgia.

“But the tribe doesn’t see that. The tribe sees you as sort of getting too cozy with John. And then they start to doubt you, because of this betrayal response. We are hard-wired to respond very violently – as I understand it, the brain really responds to betrayal. It’s one of the strongest human emotions.”

The spirit of 2010 is still very much alive in the Republican Party, as the landslide defeat of Richard Lugar in Indiana and several other recent primaries attest. The effect is to make every Republican lawmaker that much more weary of breaking with the party on a single vote and of reaching across the aisle to compromise with a Democrat or even saying anything pleasant about a member of the other party.

But Inglis thinks the end of the right’s purity crusade may be in sight. For one thing, he says, the GOP base’s restiveness will ebb if and when the economy improves. Plus, “folks that felt outside of the power structure and that were part of the insurgency against the establishment in the Republican Party are now becoming the establishment. They are moving into positions of responsibility within the party -- and the view changes once you’re there.”

The way Inglis sees it, today’s Republican freshmen will eventually come to see Democrats like John Lewis just as he does.

“Anybody that goes there necessarily has this happen to them. Whoever it is, you’ve got to aggressively fight it in order to keep that kind of edge on you. Because you’re naturally going to move toward being Dick Lugar.”

But what will really tame the GOP revolt, he says, is a Mitt Romney victory this fall – an outcome that Inglis, who remains a conservative Republican, is very much hoping for. With control of the White House, and maybe Congress too, Republicans will have to present ideas – “and you’ve got to be ready to implement those ideas. It can’t just be, ‘We’re opposed to Obamacare.’”

If Obama is reelected, though, Inglis isn’t quite as optimistic.

“Obama rejectionism is to the second – we don’t like him, plus we don’t like government generally. So it really amps up the rejectionist sentiment that says basically, ‘Anything he’s for, I’m against.’ Whereas if Romney is elected, people on the left are more likely to say, ‘We’re not generally opposed to government.’ So therefore they’re able to oppose Romney’s policies, maybe, but not have quite the degree of rejectionism.”