Another flashy resort? Atlantic City should mimic other revitalized Jersey shore towns and just be itself 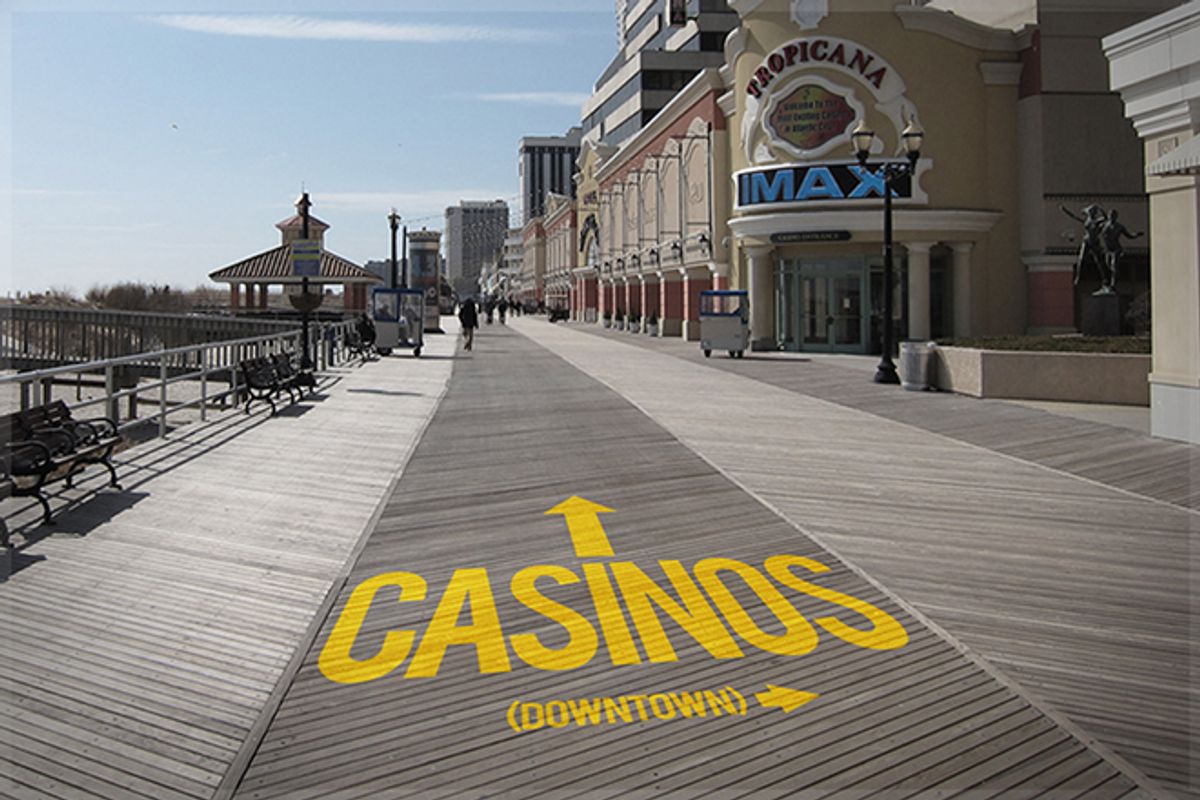 Atlantic City and Asbury Park are like two brothers with nothing in common. Both are cut from the same cloth, old Jersey weekender spots with famous seaside boardwalks. But while Atlantic City -- or A.C., as he prefers to be called these days -- is forever dreaming up new get-rich-quick schemes, Asbury Park has capitalized on the shabby, eccentric charm of his resort-town roots.

A few decades ago, both cities were blighted, tired and crime-ridden. But recently, Asbury Park has become a quirky, lovable place, and Atlantic City is still cycling through flashy one-off "solutions." Its latest is Revel Resorts, the $2.4 billion megaresort that officially opened last weekend and which New Jersey Gov. Chris Christie has called a "catalyst" for revitalization.

"It's a beautiful property," says Mortimer Spreng, a background actor in HBO's "Boardwalk Empire" and a resident of the city since 1980. "But I think with the city fathers we have, there's no clear direction for Atlantic City right now."

Everyone seems to have a theory about what A.C. needs to do to revitalize. Non-casino hotels. Less crime. A better boardwalk. But what you rarely hear is that Atlantic City needs Atlantic City itself. For over 30 years, it's tried to pretend that it's not a city at all -- recasting itself as just a sliver of hotels and outlet shops barricaded tightly along the water's edge. That the blocks beyond the boardwalk are useless is treated as a foregone conclusion. They're too sad, decaying and destitute to ever be anything but a liability, the thinking goes.

You could have said the same of Asbury Park not too long ago -- 10 years ago there were only three businesses left on the boardwalk. Today there are 38, and sales of beach passes are soaring year after year. But Asbury Park has moved well beyond its waterfront, including its blighted downtown in its recent redevelopment blitz. "We're looking to revitalize the whole city, not just the beachfront," says Tom Gilmour, the city's director of commerce.

What Asbury Park realized was that being a faded beach town that's associated with another era -- whether that be the swing-band '30s or the Springsteen '70s -- can actually be an asset. The emotional connection people have with it, says Gilmour, "is absolutely important, and [takes] expertise to make that happen, balancing the old with creating new venues that will attract a new generation ... Our best asset we have here is our music. The small clubs are very active now. And we've still got the Stone Pony and the Wonder Bar," the city's two legendary rock venues, which host performances nightly. "Music is the soul of the city. That's our economic strategy."

Atlantic City has at least that much soul. HBO has made the city's Nucky Johnson era famous, but what came after that was even wilder -- not just the opulent beachfront hotels (torn down in the '70s) but also nightclubs and swank bars throughout the city: Skinny D'Amato's 500 Club, where you could find Marilyn Monroe, Joe DiMaggio and Frank Sinatra crammed into one banquet; Grace's Little Belmont, where Sammy Davis Jr.'s mother poured drinks behind the horseshoe-shaped bar; and Paradise Club, where a breakfast show entertained patrons who'd made it to sunrise. If Asbury Park was wholesome, Atlantic City was dirty, neon-lit fun.

"It was a cool place to go," says Jonathan Van Meter, author of "The Last Good Time," the definitive chronicle of Atlantic City during the Rat Pack era. "And I think that was partly because it was seedy and lawless." But like many cities, that lawlessness spiraled out of control in the '60s and '70s, and only the cash injection from legalized gambling in 1976 staved off total collapse. It also, however, sucked all the city's nightlife onto the strip, where the casinos were. For a little while, says Van Meter, some of the clubs in the city proper hung on. "When I lived there [in the '80s], on New York Avenue there was a string of 10 gay nightclubs," he says. "And Club Harlem was still there." Today, virtually all of these places have been bulldozed or burned down.

Recently, Van Meter got a call from some marketing people asking him for his thoughts on how Atlantic City could be reborn. "I told them they had missed the opportunity to take what existed in the city and incorporate it into the vibe of the whole place," he says. "They should be proud of these pockets of otherness and not be ashamed of the city. I think I used the phrase 'glamorous decrepitude' at one point." He laughs. "You could feel the blank stares coming through the phone."

But glamorous decrepitude, of a sort, is what Asbury Park has infused into its revival. Its boardwalk, once partially abandoned, is now stocked with spiffy modern tourist boutiques, but it also has plenty of throwbacks: The cacophonous Silverball Pinball arcade, the gorgeous Casino and Carousel Building, the refurbished '60s-era Empress Hotel and the "Mad Men"-fabulous Howard Johnson's building, now home to the Salt Water Beach Cafe.

It's the downtown area, however, that's been the most unlikely success. Along Cookman Avenue, eerily quiet just a few years ago, there are Zagat-rated restaurants, clothing shops and antique stores. This month, it got its first farmer's market. A few blocks north, there's Asbury Lanes, a bowling alley that hosts burlesque shows and punk bands. And there's The ShowRoom, an art-house cinema that Nancy Sabino and Mike Sodano opened in 2009.

"I would say that just five or six years ago, putting in a movie theater wouldn't have been a positive move," says Sodano. Now, they're breaking ground on a second theater to open later this summer.

The speed with which Asbury Park has changed has a lot to do with the investment of one developer, in particular: Madison Marquette. Single-developer projects are often disasters. But here, it's worked because it's created a space where not just one developer stands to profit, but where other entrepreneurs like Sodano can feel confident buying into. "It takes a lot of vision to see what Asbury has," he says.

Atlantic City, finally, is starting to think about its off-beach areas, too. In February, the Casino Reinvestment Development Authority approved the city's tourism district master plan. It's a 190-page schema with big ambitions, creating a real Main Street out of Atlantic Avenue and revitalizing parts of the city that, given their dramatic oceanfront locations, one can hardly believe lie fallow.

Whether it will work is a big if -- Atlantic City is bigger than Asbury Park, with true urban problems. And as Mortimer Spreng said, the city leadership needs to snap out of its listlessness. "I was just in Asbury Park, and it's absolutely gorgeous," says Spreng. "All the homes are being refurbished. I don't know if Atlantic City, even with its tourism district, can get there. I blame a lot of it on the administration."

But at least, for the first time in decades, the boardwalk area and the city proper are talking to each other. It's demolished a lot of its heritage and lacks even basic amenities (the Tropicana's IMAX screen is the city's only movie theater), but Atlantic City still has some amazing spots that should be tourist magnets. There's Tony's Baltimore Grill, a frozen-in-time former mob hangout that churns out delicious thin-crust pizza and $2 drafts; Dock's Oyster House, a century-old seafood restaurant that serves some of the best lobster you've ever tasted; and Princeton Antiques, an eccentric old bookshop and curio store that would be a go-to destination in any city.

Revel's success would be good for the city, but it won't be a savior. If it forces the other resorts to up their game -- and there's evidence that's already happening -- then all the better. But for a city that's located within one tank of gas for a quarter of the U.S. population, Atlantic City has way more potential than a dozen hotels along the beach can hold all by themselves.