In the United States, Krugman writes a newspaper column. In Europe, his ideas make headlines 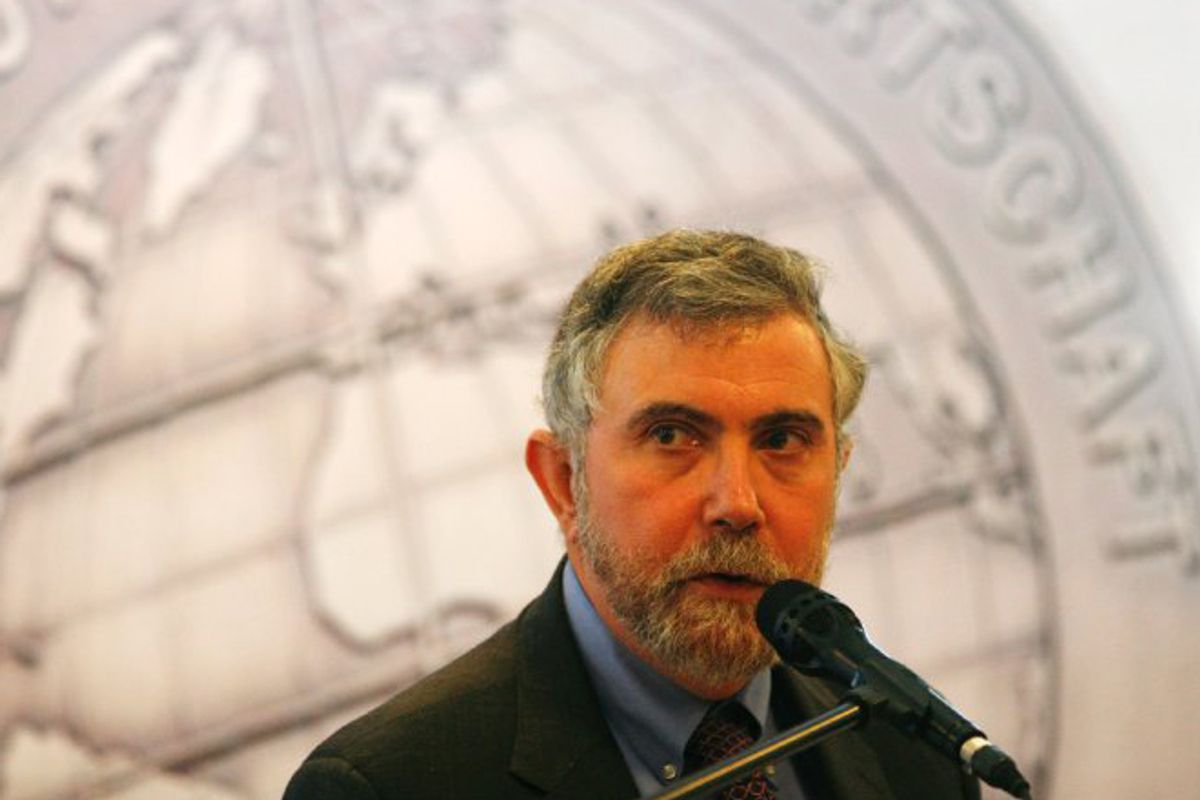 Paul Krugman is not a name you’d expect to see plastered onto the sides of Madrid’s buses. But last we heard, his Spanish publisher was planning to use the rolling billboards to sell the Nobel laureate’s new book, “End This Depression Now.” Titled “¡Acabad ya con esta crisis!" in Spanish, it’s already in its fourth printing in a country where more than 50 percent of workers under 25 cannot find a job. They know firsthand why Krugman calls it “economic suicide” to cut public spending massively when the economy is taking a nosedive. Germans, who tend to see such cuts as only prudent, are also reading Krugman, often with distaste, while the British have put him front and center as the queen floats down the Thames for her diamond jubilee and ordinary blokes wonder why their economy has sunk into a double-dip recession.

Like Americans, Europeans either love or hate our rock-star economist, but his reception on their side of the Atlantic drives home a hard truth that few aside from Krugman have bothered to tell. Eurodämmerung, as he calls it, came to Spain and Ireland neither from public extravagance nor from Goldman Sachs fiddling the accounts with credit default swaps, but from genuine efforts to bail out over-indebted private banks sucked in by low-interest loans from German and American lenders. Easy money and European Union grants to build motorways were the euro’s early blessings. The curse came only after Wall Street wrecked the world’s financial system by selling derivatives based on shaky subprime mortgages.

For Krugman, Spain is “the emblematic euro crisis economy,” where huge inflows of easy money fed an unprecedented housing bubble aimed significantly at British tourists and retirees. It tasted good, pushing more euros into workers' pockets and booming tapas bars -- until the global collapse. That’s when Spaniards discovered how the artificial boom had made their country uncompetitive. Trapped in a currency they could not devalue, they had no easy way to cut their prices and make their products, workers and vacation spots more attractive. Krugman tells the story clearly and sympathetically, which makes him highly popular with Spaniards. They read his columns in one of the country’s leading newspapers, El País, and find his pronouncements in headline stories throughout the media. He is, as one unhappy right-winger put it, a guru becoming superguru.

The Germans, little wonder, appear more skeptical. Krugman has been telling them for years that they don’t understand the crisis and that Chancellor Angela Merkel’s budget-cutting demands during an economic downturn makes the situation worse. Nor do the Germans like hearing that they are the biggest beneficiaries of the euro. Much of the easy money that poured into Greece, Spain and other peripheral countries went to buy German subway trains Volkswagens, BMWs and other exports, which is what brought the German economy out of the doldrums after the costly reunification with the formerly Communist East Germany. And much of the bail-out money they hate to hand out to those they see as shiftless southerners comes back to pay good German bankers. Why are the Germans so mad at the Greeks and not at their own bankers? That is a question more Germans need to ask themselves.

What’s obvious is that few Germans share or fully fathom Krugman’s mindset, as came through a couple of weeks ago when the magazine Der Spiegel interviewed him at length.

Spiegel: ...you have repeatedly pointed out that Germany's pushing for austerity will lead Europe on a death trip and that prosperity through pain is a fantasy.

Krugman: That's right. I thought it was obvious from the beginning that this is never going to work. If the policy makes any sense at all, it's through mass unemployment, driving down Spanish wages. How many years is that supposed to take...?

Spiegel: ...4 or 5 percent inflation may be fine for a short while, but how do you make sure that it doesn't rise to 7 and 8 percent or more once the expectation is there?

Krugman: ...Just raise interest rates once it's creeping up to the level you don't like ... If you actually look at the histories of the inflations that we've had, hyperinflations come from a very different story. They come from governments that can't raise revenue and just rely on the printing press...

Spiegel: What do you think about the growth programs that are currently being discussed within the European Union? Are they enough?

Krugman: This is a water pistol against a charging rhinoceros. This is ridiculous. These are ludicrous, trivial things compared with the scale of what's going on...

Spiegel: More stimulus also means more debt. Many European nations, as well as the US, are already drowning in debt.

Krugman: I'm not saying that I don't ever care about debt, but not now. If you slash spending, you just depress the economy further. And, given the low interest rates and what we now know about long-run effects of high unemployment, you almost certainly actually even make your fiscal position worse. Give me a strong-enough economic recovery that the Fed is starting to want to raise interest rates to head off inflation -- then I become a deficit hawk.

In Krugman’s view, the question of economic policy was never either-or, but simply when to do which, as Keynes figured out three-quarters of a century ago. Krugman even quoted the master to his clearly discomfited German interviewers. “It’s the boom, not the slump, that is the time for austerity.”

Krugman has been making the same Keynesian case this week in Britain, where he frontally attacked the coalition government over its self-imposed austerity policy. Selling his new book like the professional he is, he gave a scholarly lecture Tuesday to a packed house at the London School of Economics and then appeared on several BBC current affairs programs. To get a taste, take a look at the highly regarded Newsnight, where he nimbly dispatched two high-powered government defenders. Large economies are not individual households, Krugman schooled them. My spending is your income, and your spending is my income. So, if everyone slashes spending, we end up producing a depression.

Jon Moulton (venture capitalist and Tory donor): The issue about austerity here is, really, we have too large a state. We’ve let the economy go from 30-odd percent to pushing 50 percent public sector. If you want growth you need a larger private sector, not a larger public sector...

Krugman: ...Actually, none of this is at all about fiscal responsibility. It’s all about exploiting the current situation to pursue an ideological goal of a smaller state. We can argue about whether the British state is too large, but look at Sweden, which is actually weathering this well with a much larger state than you have. So, that’s a great diversion. That’s suggesting that you’re not actually sincere. It’s not really the budget deficit that concerns you. You’re looking for a way to exploit the deficit situation to pursue an agenda.”

Nor did the intrepid Krugman stop with bashing Tories and their ideology. In an interview with the New Statesman, he also castigated the Labour Party for their tepid opposition to the government’s spending cuts and their plan to halve the deficit over four years. Their position, he said, was “We’re like them but only less so.” He could have said the same thing of François Hollande in the French president's less-than-epic battle with Merkel.

So, what does Krugman himself think of his starring role in Europe’s economic debate? In his Thursday column, he summed up his best fighting words. “So the austerity drive in Britain isn’t really about debt and deficits at all; it’s about using deficit panic as an excuse to dismantle social programs. And this is, of course, exactly the same thing that has been happening in America.”