Helen Alvaré has been leading Catholicism's fight against contraception 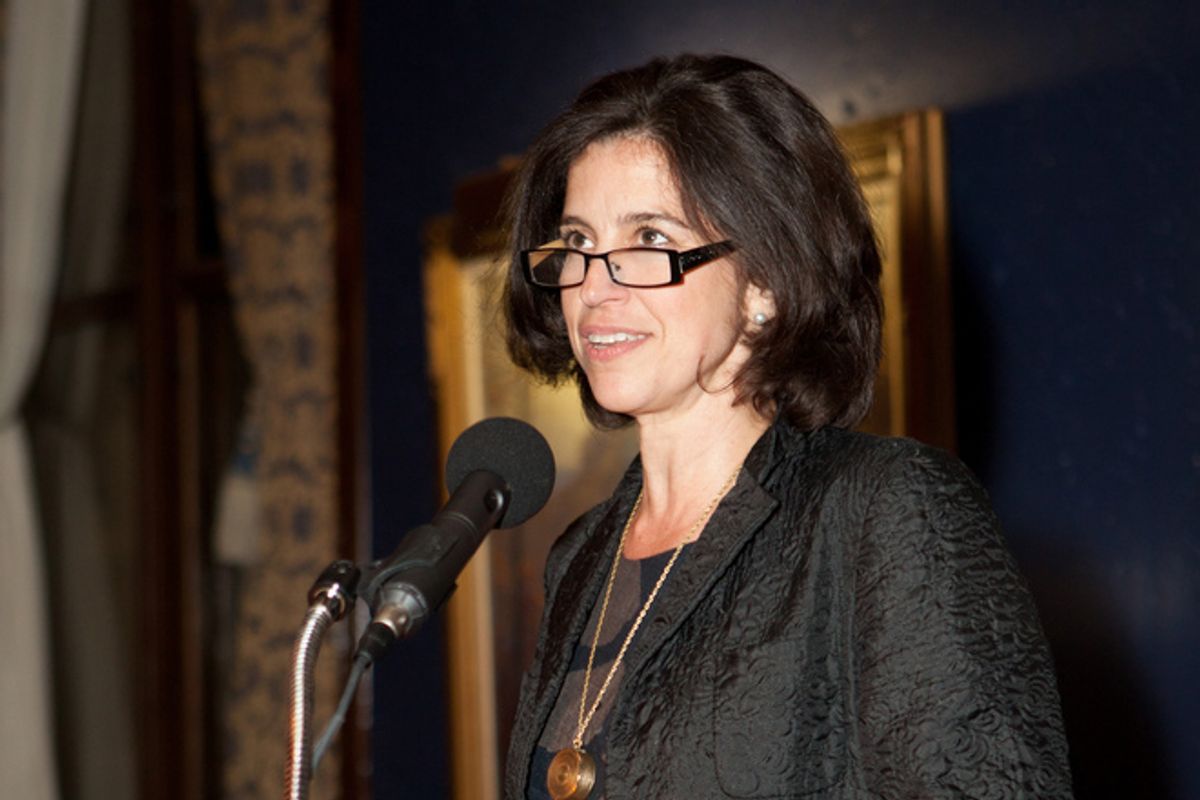 What’s a conservative activist to do when Jon Stewart digs up a CNN clip that's more than a decade old in which she opines that Viagra fills a legitimate healthcare need but contraceptives do not?

In Helen Alvaré’s case, the answer is to own it. Alvaré, a law professor at George Mason University, an advisor to Pope Benedict XVI's Pontifical Council for the Laity, and a former spokesperson for and current advisor to the U.S. Conference of Catholic Bishops, used her Daily Show cameo as the starting point for a recent speech at the Franciscan University of Steubenville. The mockery of Jon Stewart was proof, Alvaré suggested, that sexual libertines don’t understand the nature and purpose of sex, and that they certainly don’t understand religious liberty. Because, she argued, Stewart and the government share the belief that sex “is not related to procreation directly, intrinsically, axiomatically,” they simply cannot comprehend the gravity of how contraception damages women.

“Only with this view,” Alvaré added, “could a comedian or a government conclude that if a man has a condition that makes it difficult to procreate, that’s not a medical problem. But if a woman is in a position where she can procreate, then she needs some medicine, and it better be free.”

As the contraception mandate took center stage in national politics, Alvaré has seized the moment, not just to offer legal arguments against the mandate, but to position herself as a leader of women who are opposed to contraception. Three months ago, she co-authored an open letter to the Obama administration, “Women Speak for Themselves,” charging that the U.S. Department of Health and Human Services, by enacting public policy based on the science that contraception is essential healthcare, doesn’t represent the views of all women. (She made a point of telling Raymond Arroyo, host of a news program on the Catholic Eternal Word Television Network, that she was making chicken soup for her kids when she came up with the idea.)

The letter was republished on conservative websites and blogs, including the National Review. When 43 Catholic organizations sued HHS last week, she published a syndicated commentary boasting of the letter’s 28,000 signatures and accusing the administration of “demeaning” women. Alvaré appears frequently in the media — and not just as a laughingstock on the Daily Show — and she is one of several prominent Catholic scholars dispatched in academia and ideological think tanks and on the front lines of activism in the religious freedom wars. She is a fellow at the conservative Witherspoon Institute in Princeton, New Jersey, where she focuses on issues of “conscience,” and she is one of the “circle of experts” for the National Organization for Marriage’s Ruth Institute, which aims to shape public opinion on college campuses and elsewhere about “marriage as the proper context for sex and childrearing.” This spring, she was awarded the 2012 Notre Dame Evangelium Vitae Medal at the University of Notre Dame. In announcing the award, a Notre Dame spokesperson said she “has courageously and powerfully defended the cause of life against all comers for two decades,” adding, “[i]n some of the darkest hours for the pro-life cause in this country, her voice was heard clearly. With a public presence in the popular debate, a foot in the scholarly world that bolsters and sustains the deep arguments on life issues, and her extraordinary ability to connect with people, she has been a hero to us all.”

For anyone who thinks either Stewart’s ridicule or public opinion in support of contraception might compel these activists to give up the fight, Alvaré’s prolific writing, speaking, and general advocacy demonstrates just how entrenched — and intertwined — conservative Catholic scholarship and activism are.

When I first saw her speak at a panel discussion on the HHS mandate and religious freedom at Georgetown University in March, Alvaré crammed 50 years of legal, medical, Catholic, sexual and sociological history into a breathless dissertation about how the availability of contraception has led to the “immiseration” of women. She accused the Obama administration, through its reliance on the Institute of Medicine's recommendations on contraception coverage, of being motivated by possible anti-Catholic “animus,” and dismissed out of hand the relevance of the scientific and medical evidence the IOM report presented. For Alvaré, the medical evidence is purely ideological and untrustworthy, precisely because it is premised on the usefulness of contraceptives and compiled by people who favor the availability of contraception and abortion.

At the heart of Alvaré’s persistent arguments are what she presents as two essential truths: Birth control is bad for women’s health and well-being, and the government’s effort to legislate insurance coverage for it by religious institutions represents a violation of both religious freedom and the separation of church and state.

Some proponents of this view, including Garvey, believe their position is bolstered by the recent Supreme Court case in Hosanna-Tabor Evangelical Lutheran Church School v. EEOC. In that case, the Court held that under the “ministerial exception” to employment discrimination laws, a parochial school teacher could be deemed by her employer to be a “minister,” thus barring her suit. The Court found that “requiring a church to accept or retain an unwanted minister, or punishing a church for failing to do so, intrudes upon more than a mere employment decision. Such action interferes with the internal governance of the church, depriving the church of control over the selection of those who will personify its beliefs.” That the Obama administration had argued against what turned out to be a 9-0 ruling is further proof, for conservative advocates, of the administration's opposition to religious freedom.

Alvaré takes this idea that the government is interfering in Catholic affairs and piles on the completely fallacious argument that the government aims to harm women by promoting sexual promiscuity with contraceptives that don’t even work anyway. On the latter point, she echoes the falsehoods promoted by her former employer, the U.S. Conference of Catholic Bishops.

In her Georgetown speech, Alvaré said that the 1968 papal encyclical Humane Vitae, which bans the use of birth control, “protects the nature of sexual intercourse,” which is to “bond couples and create children.” The encyclical itself, she said, predicted “that widespread practice of contraception would lead to more non-marital sex, the objectification of women, and the likely exercise of a frightening degree of power in the hands of government in its attempt to impose their [sic] will on the population to solve social problems.” (Alvaré conveniently overlooks the internal dissent generated by the encyclical when it was issued, not to mention the widespread Catholic rejection of it.)

Alvaré insists that risk compensation — the concept that seat belts cause driver complacency and thus lead to more traffic deaths, for instance — proves how contraception fails women. Due to the increasing availability of contraceptives, she argued at Georgetown — citing the 1960 FDA approval of the Pill; the 1965 Supreme Court decision in Griswold v. Connecticut; its 1972 decision in Eisenstadt v. Baird, which extended Griswold to single people; and the 1970 implementation of federally subsidized contraception through Title X — the rate of unintended pregnancies rose from one-third to 50 percent. (She admitted this claim was based on "notoriously slippery" figures; in any case, unintended pregnancies aren't caused by the availability of contraceptives, but rather the failure to use them or to use them effectively.)

“When you invent parachutes,” she said in Steubenville, “more people die jumping out of planes.” But, contra Alvaré, teen pregnancies are now at an all-time low, thanks to contraception. She laments increases in non-marital birth rates — but non-marital birth rates don’t mean contraceptives fail. Higher rates of non-marital births might demonstrate exactly what Alvaré doesn’t want to hear: that contraceptives aren’t made widely available — or correctly used — often enough. Or the statistics might just mean that women are choosing to have children in a manner inconsistent with the sexual mores of Helen Alvaré. In any case, contraceptives, when used correctly — forgive me for having to reiterate this — are highly successful at preventing pregnancy.

Alvaré and her cohorts might seem absurd — after all, having sex isn’t like jumping out of an airplane — but in conservative circles, both academic and political, her views are given currency. She contends that what she calls “sexuality-ism” — essentially, sexual freedom — is “the most pronounced opponent of religious freedom right now.” But, she adds, with both honesty and portent: “Who is the biggest opponent of sexuality-ism? It’s us.”