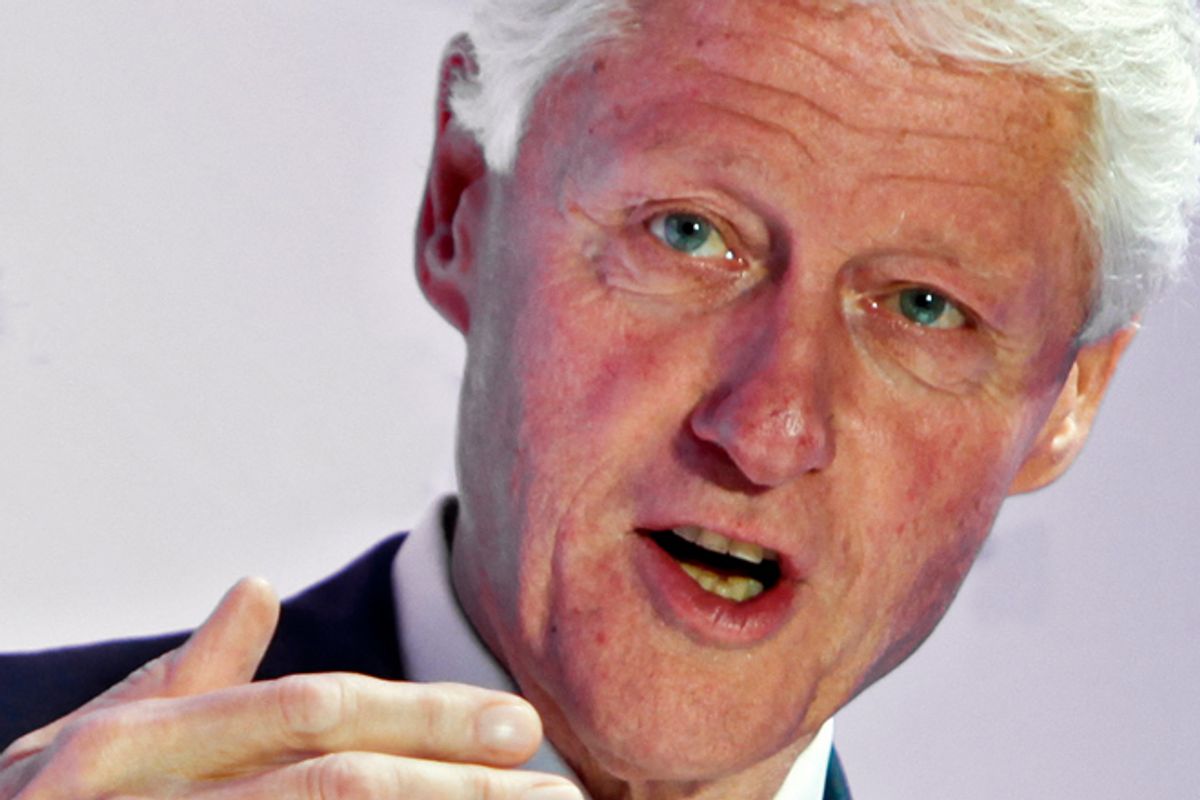 Former President Clinton joins President Obama at a big fundraiser Monday night in New York. While Mitt Romney offered a dinner with birther loon Donald Trump as a premium for his donors, to much derision, Obama offered Clinton. That's what makes the former president's media turn last week, praising Trump and Romney, so bewildering and vexing. Of course Clinton wants his Democratic successor to win. So why would he lavishly praise two of Obama's top antagonists, one from the electoral realm, the other from the gutter?

I've mostly dismissed stories about rivalry and tension between Obama and Clinton, at least after 2008, as media mischief. But the former president's comments last week in an interview with Harvey Weinstein on CNN can't easily be explained away, even as the two men get ready to put up a united front to raise a ton of money tonight.

Clinton got most attention last week for calling Romney's Bain Capital career "sterling," and criticizing the Obama campaign's efforts to focus on the occasions in Romney's career when he bought companies, cut costs, threw employees out of work, got the government to bail out pension funds and provide a safety net  – while Bain and Romney pocketed a small fortune, no matter what happened to the firm. Apparently Clinton doesn't see a problem with that. "I don’t think we ought to get into the position where we say, ‘this is bad work, this is good work. There’s no question that, in terms of getting up, going to the office, and basically performing the essential functions of the office, a man who’s been governor and had a sterling business career crosses the qualification threshold." No one is suggesting Romney isn't qualified to be president; that's what the other team says about Obama.

I'll get back to that outrage in a second, but I want to talk about the Clinton comment I found far more awful and inexplicable, which got less attention: his warm words for top birther Donald Trump, and his unbelievable weasel words when asked about scurrilous lies that Obama wasn't born in the U.S. It was Harvey Weinstein, subbing for Piers Morgan, who got both the Romney and Trump admissions from Clinton, but the Trump statement was far more disturbing. When Weinstein mentioned Trump's latest foray into crackpot birtherism and asked, "How do you put that out of the minds of the American public … once and for all?"  Clinton offered his worst answer since saying "it depends on what the definition of 'is' is." He told Weinstein:

I don't know. You know, Donald Trump has been uncommonly nice to Hillary and me. We're all New Yorkers. And I like him. And I love playing golf with him. But the evidence is pretty clear that President Obama was born in Hawaii and this whole election should not be about any of these side issues. It really ought to be about the decisions that each of them will make on where we are and where we need to go.

"I like him" is a pretty shoddy thing to say about the guy who's humiliating your ally, the president, in psychological and racial ways. Even worse is Clinton weakly nodding that "the evidence is pretty clear that President Obama was born in Hawaii." This was a time for that old Clinton, the angry, righteous guy who ripped Chris Wallace a new one, to attack the birther conspiracy as even lower than the right's efforts to claim he peddled drugs, fathered an illegitimate black child and had a role in the death of his friend Vince Foster. Even assuming he truly likes Trump, which I find hard to believe, he's even more required to tell his friend to shut his trap and get back to firing folks on "Celebrity Apprentice." Now is the time for even erstwhile friends of Trump who have a conscience to usher him off the political stage, and to sharply criticize his birther nonsense.

What does Trump have that Clinton needs, anyway? His wife isn't New York senator anymore. She says she doesn't want to run for president, though who knows what will happen in four years. Even if she does, is Trump's support and money really worth defending the narcissistic fat-cat's racist bullying of our first black president?

It may be that Clinton's Trump defense is related to his Bain Capital defense, and both have to do with protecting his dubious legacy: making the Democrats competitive with Republicans in raising money from Wall Street and, more broadly, the FIRE sector -- Finance, Insurance and Real Estate, the sector that gave lavishly to both Hillary Clinton and Barack Obama in 2008 but ultimately favored Obama. While Clinton has expressed regret for signing bills repealing Glass-Steagall and essentially waving a "Go" sign at the predators of Wall Street, he can't quite quit them.

It's the same reason that Cory Booker, Harold Ford Jr., Steven Rattner, Ed Rendell (whose populist instincts I normally respect), Sen. Mark Warner and other opportunistic Dems have been doing their best to show finance capital that they're the good Democrats, the ones who still love Wall Street, even at the expense of the president.

Trust me, if Obama loses, there will be a huge push to blame it on his seeming hostility to Wall Street – a measure of what spoiled little princes and brats those masters of the universe are. Obama once called them "fat cats" – but he otherwise deferred to them, resisting all efforts to break up the banks, limit their bonuses, force them to write down mortgages in default or otherwise help the victims of their casino high jinks. Still, there will be a long list of Democrats – look for Evan Bayh! – to tell us Obama's "class warfare" cost him the election, and that the party needs to repair its ties to Wall Street, and the top 1 percent more generally, to win back the White House.

Of course, ever since the 2010 midterm debacle I've been pointing out that Americans who blame the economy's troubles on Wall Street voted for Obama in 2008, but Republicans in 2010, according to CNN exit polls. Wall Street may be offended by Obama's milquetoast rebukes, but many Americans have seen him as their champion.

I think Bill Clinton is trying to telegraph to his old Wall Street friends -- and to friends of his Clinton Global Initiative, an admirable philanthropic juggernaut that mainly relies on flattering rich people to get them to do what people of conscience should do anyway -- that the young president has taken a wrong turn, and other Democrats don't agree with his criticizing the financial sector. Let's hope American voters fed up with Wall Street don't hear the former president's imprecations.

I've been a huge defender of Bill Clinton over the years but I've got to say, his Bain comments were disloyal and his Trump comments were offensive. He better raise a lot of money for the president Monday night to balance out that betrayal -- of Obama, and of the party that's struggling to find its moral and political moorings after its damaging dalliance with the men who wrecked the economy.