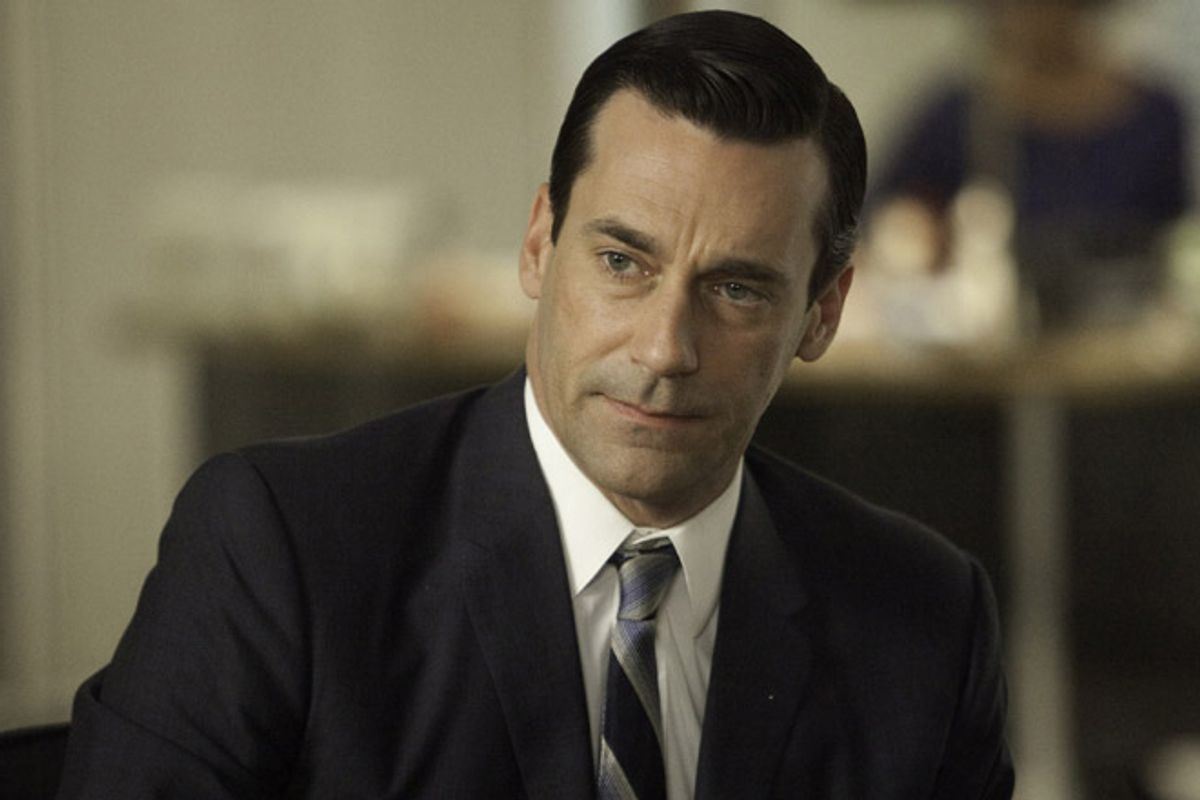 What does it mean to be a man?

“Mad Men” has pondered this question not only from its very first episode, but from the moment the show was named. Ostensibly just a jokey moniker that Madison Avenue guys gave themselves in the 1950s, the name “Mad Men” also suggests the anger that men often feel at the circumstances of their lives, the wild aggression of their ambition and sexual desire, and the loss of clear thinking -- or even sanity -- from the pressures they face.

In “Commissions and Fees,” we see the toll that a man’s life can take on him, as surely as payment is extracted from clients. And it is the aptly named Lane Pryce who pays that ultimate commission, as if in penance for the other partners’ sins. (Symbolism abounds: Sacrificial lamb Lane promises to “make good by Easter,” jokes with Joan about how to best “celebrate the death and resurrection of our Lord,” and Pete mutters “Jesus” while cutting the rope in order to allow Lane’s body to be reverently lowered, revealing an improbably beatific smile on his ashen face.)

Of course, unlike Jesus, Lane is guilty of real crimes, for which he has no one but himself to blame. He could have come to Don with his problem and been bailed out rather than having Don cut down first his ego and then his lifeless body. But Lane is part of an ethos that Don also participates in, namely the conspiracy of male silence – a cult of non-cooperation that requires every man to make it on his own, or die trying. That cult may be somewhat diminished today, but in this era, it was monolithic, making it perfectly normal for a man like Lane to decide it’s better to embezzle than endure “humiliation” by asking for a loan, and to believe that ending his life (no matter how much pain it would cause others) is a better choice than starting over.

Naturally, Don’s a proponent of the latter course, advising Lane that his life will only become better, just as it has the many times Don’s started over. But even as he gives out advice, Don’s far from following it himself. Despite chiding Lane for not asking for help, Don’s guilty not only of publishing the infamous Lucky Strike letter without consulting his partners, but acting alone when confronting Lane and asking for his resignation -- a seemingly merciful approach that has tragic repercussions. Both Don and Lane are guilty of blind independence, but one of them will end up impotently fumbling in a car’s faulty engine while peering through a single lens, and the other will roar ahead by clarifying his vision of what he wants and reasserting his manhood.

Stinging from an encounter with Jed Covington of rival agency Dancer Fitzgerald, who’s given him the backhanded compliment that Jaguar was a “big win for your little agency,” and mistakenly scolded by Bert for “being the good little boy while the adults run the business,” Don is primed for that task with psychic napalm, and utterly unconcerned about collateral damage. (He even stuns Roger by blithely suggesting they throw Cosgrove to the wolves.) Having already rejected the idea of trading the less secure but potentially more lucrative commission model for the safety of set fees, Don girds himself for an even bigger gamble. Seething to Roger that he’s tired of thinking small (even if that worked well for rival DDB), a tactic that’s left them unable to grant the Christmas bonuses that might have prevented an Easter sacrifice, Don compares the “piddly shit” second- and third-tier clients they’re accumulating to the naive coat-check girl that Roger found all too easy to impress.

Emboldened by Lane’s honesty, Don finally confesses the impact of his tobacco letter to Roger, who waves the problem aside (as Don would have Lane’s if he’d come to him with his financial woes in the first place). Admitting that the sex is “always disappointing” after the thrill of the chase, Roger challenges Don to rediscover his true desire, making explicit the real excitement for men like Don by observing that a client’s "no" used to “make him hard.”

And hard is precisely what Don becomes in a meeting with his great white whale, Ed Baxter of Dow Chemical. Gone is the flaccid Don who’s been lying limply on his office couch all season, replaced by a pillar of aggression who approaches the prospective client less like a seducer than a date rapist who won’t take no for an answer. Chiding the smug Dow execs for falling into the same complacency he’s only just awoken from, Don taunts that they’re being fleeced by their current agency, a financial ravishing  they’re enabling by settling for half-measures and half-markets.

Perfectly describing the American rat race, Don argues that success is only temporary, lasting no longer than a meal, before illuminating our culture’s hedonistic treadmill with the declaration that “happiness is just the moment before you need more happiness.” Endless desire, endless consumption, endless striving is the crux of American life, with only fleeting moments of fulfillment that never satisfy but merely whet your appetite for more.

“I won’t settle for 50 percent of anything,” Don argues. “You don’t want most of it, you want all of it, and I won’t stop until you get all of it.” In his controlled frenzy of aggression, Don resembles not just the wild animals in the museum that Glen and Sally visit, but the hunters who coldbloodedly killed entire families for that display – a resemblance Roger observes by joking about the blood Don needs to wipe from his mouth. Having killed and fed, Don’s as elated as a vampire, even if he drinks from a cocktail glass rather than a jugular vein. His behavior’s so extreme that Roger invokes another form of male madness, jesting that if the client hasn’t reported Don to the firm, perhaps they’ve called the “men in white coats.”

Unfortunately, the white coats were never called for the red coat who needed them, because psychological help would be even more humiliating to a man of Lane’s generation and background than prison or suicide. His death leaves his partners stunned into silence, a void matched by the “boilerplate” of his resignation (rather than suicide) letter, which provides no answers to their questions. “What the hell happened?” Roger asks, to which Bert replies, “Who the hell knows?” The answer of course is Don, but by choosing once again not to share the knowledge he has with his partners, he leaves them struggling with mystified shock and grief. While Don blames the other partners for the sacrifice that Joan made for the firm, he has only himself to blame for Lane’s death, even if blame is inappropriate in both cases.

So if ambition, aggression, silent suffering and premature death are some of the answers to the question of what it means to be a man, what does it mean to be a woman? That question has always been the negative space to the positive ground in “Mad Men,” and this week’s episode fills it in a bit more, albeit crudely, by highlighting public and private markers: Blood on the mouth signifies manhood, and blood in the underpants signifies womanhood.

If the men are at least metaphorical killers and aggressors (and perhaps literal ones in Don’s guilty conscience), then women are the life-givers and nurturers. Sally becomes a woman in the biological sense, but is still merely playing at being an adult. She invites Glen for a secret rendezvous while unsure of what they feel for each other, although being together highlights their varying maturity. “You don’t look that different,” Glen judges upon seeing her, to which she responds, “You do.” While Sally’s womanhood appears secretly and shamefully hidden under her clothes, Glen’s budding manhood is sprouting all over his upper lip – a development Sally doesn’t like. After he confesses that she’s been the object of his sexual boasting, she bluntly tells him she doesn’t like him “that way,” which prompts Glen to label her a little sister. As in business, status is relative to the people around you, and Glen’s remark demotes Sally from her usual role as eldest child to that of younger sibling.

Sally does seem younger in the big bad city than she does out in the suburbs bossing her mother around. Listening to Megan’s indiscreet friend Julia talk about seduction and pubic hair, she feigns sophistication and tries to imitate Megan by ordering coffee, but has to shower it with a snowfall of sugar to make it palatable. She’s not ready for the bitterness of adulthood -- or the pain of womanhood. Shocked by its arrival, she flees to Betty’s surprisingly welcoming arms, which hold her tightly while indoctrinating her into a woman’s traditional role. “There’s a lot of responsibilities,” Betty intones solemnly, “but that’s what being a woman is.” A woman’s period is “unpleasant,” but “it means everything’s working. Everything’s ready for a baby when you want one.”

Betty’s warm smile and cuddling arms can’t hide the chilling message: When things are unpleasant and painful for women, everything’s working as it should. You can imagine Betty’s mother giving her the exact same speech, priming her for a life of disappointment and bitterness, while her father’s treating her like a princess raised her hopes that her mother was somehow wrong. It’s no wonder Sally seems to prefer Megan’s hopeful message that boyfriends are people who know you and still want to make you feel special – even if Megan herself is still feeling resentful about self-absorbed Don not seeing her needs.

Acting as Betty’s mirror image, Lane’s wife is the eternally optimistic and supportive wife, believing everything is going right but without the pain and suffering that Betty believe is a woman’s prerequisite. Yet having innocently written a check as bad as her husband’s, she’ll not only pay for her own action, but for that of her husband, who has responded to her consistent love and pride with the hostile cowardice of suicide. And even the jovial Cosgrove, who says he doesn’t want to be a partner because he’s “seen what’s involved,” conspires with Roger to shut old rival Pete out of all new business, a plan that requires him to deceive his wife.

“Why does everything you think is gonna make you happy turn to crap?” Glen asks Don at the end of the episode (thereby suggesting that Sally’s rejection actually did hurt him). Sliding down to Glen’s level, Don doesn’t deny the truth of this observation but merely says Glen’s too young to be talking that way. Asking what he’d do if he could do anything, Don grants Glen the chance for positive action rather than sliding into misery, which Don has just vividly seen leading to death.

While Lane snapped his glasses in half before trying to kill himself, indicating his unwillingness to see his situation accurately, Don’s vision has cleared. Escaping the city that Sally calls “dirty,” which has left Don feeling particularly soiled that day, he lets the boy-man Glen take adulthood for a test drive, only occasionally putting his steadying hand on the wheel. As they each peer through a semi-circle of clarity on a windshield otherwise covered in dirt, Don calmly keeps his eyes on the road ahead.