On the economy, pointing fingers just reminds Americans of how screwed up things are 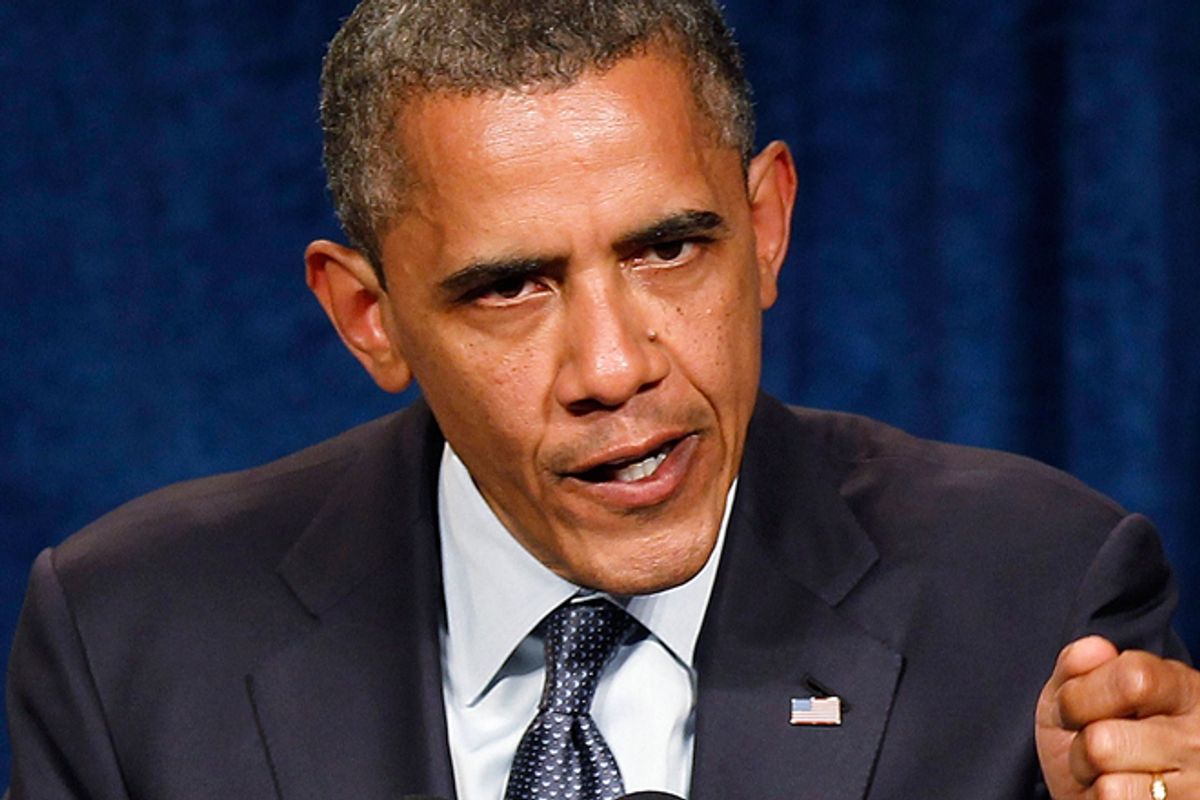 Reviewing the economic data released last week, we know one thing for sure: The conspiracy theorists are wrong. The Obama administration is not massaging the numbers to make things look better than they seem. Or if they are, they're doing a horrible job. Eighteen out of 21 economic indicators underperformed consensus expectations in the last week of May. It was the worst week we've seen in some time, including, as Calculated Risk summarized, "a weak employment report, a downward revision to Q1 GDP growth, a disappointing ISM manufacturing index, weaker than expected auto sales, an increase in weekly unemployment claims, house prices at new post-bubble lows, [down] pending home sales..."

The trend continues this week. Monday morning brought us the news that factory orders are down across the nation and across all categories. The only good thing happening in the economy -- falling gas prices -- is itself a consequence of declining demand for oil worldwide induced by slowing global economic growth.

This being the silly season of American politics, we can't discuss what government might do to address the issue, because that's moot: Government won't do anything. Indeed, one of the worries weighing on the economy is that if Congress continues to do what it does best -- nothing -- government spending will get slashed and taxes will jump simultaneously at the end of this year. A roaring economy would have a tough time swallowing that kind of uncushioned blow; today's economy would go straight from the sick bay to the mortuary.

So the only thing left to spar over is whom to blame, or if you want to get even more meta, we can dig deeper into the weeds and criticize the quality of the current blame game.

Paul Krugman does both. He blames the Republicans for the current state of the economy and blames the Obama administration for not blaming Republicans enough for their obstructionism. This is an attractive line of argument, not least because it is not wrong. The Republican prescription for economic growth is to cut spending and cut taxes, and that's exactly what we've been doing for the last couple of years. Spending cuts at both the state and federal level have been sucking demand out of the economy ever since stimulus spending petered out. As Krugman observes for the umpteenth time, when government borrowing costs are as low as they are now -- lower than they've ever been in the history of the United States! -- that's just dumb policy. Now is the time to borrow mightily and spend on infrastructure.

Of course, the more time Obama spends blaming Republicans for the current state of the economy, the more he reminds voters a) that the economy sucks and b) of his own inability to overcome GOP obstructionism. It's a no-win situation, and it invites unappetizing scrutiny of Obama's record: For example, Obama allowed himself to get sucked into a fight over who could cut the deficit faster when that was the exact wrong strategy, both politically and economically; he failed to pick a major fight with Republicans over getting the right people appointed to the Federal Reserve early enough in his first term; and his efforts to address the foreclosure crisis have been almost comically incompetent. Any sustained campaign of throwing mud at Republicans over blocking Obama's agenda just reminds us of how bad Obama has been at pursuing his own agenda.

Furthermore, the problem isn't simply political. Until the last couple of months, the U.S. economy was one of the few bright spots on the globe. Europe continues to muddle through a constant state of crisis. Economic growth in China, India and Brazil is slowing. Worldwide, investors look around and see very few encouraging signs, which is all you need to know to explain why the U.S. stock market has been in steady decline. As the Economist's Ryan Avent suggests, there are somber reasons why the current global mess is even more frightening than the great financial cataclysm of 2008. The credit crunch was a massive financial panic, but the world pulled together to stop the madness;

This time around... is different. This time, a broad institutional crisis appears to be brewing. Markets may be questioning the ability of policymakers around the world to manage the macroeconomy in a non-disastrous way. Europe is the most obvious and dangerous flashpoint in this crisis, but it is by no means the only one. In America, as my colleague says, confidence was seriously rattled by last year's debt-ceiling showdown, and it is frightening to think that an ever bigger fiscal confrontation looms ahead at year's end. China's economy is weakening, and while it seems clear that the government has the tools to support it, the interaction of economic weakness and political transition in a place with such opaque political institutions breeds concern.

So whom should Obama blame for his current predicament? With equal justice, he can point the finger at himself, at Republicans, or at global economic trends that he has little or no power to affect. But of course it's the combination of all three that best explains the gloom. Which means, at least for now, that we're screwed. And what does Obama gain by reminding us of that?