Romney aide cashes in on Obamacare

Updated: The man in charge of Mitt Romney's transition team has reaped fortunes off of new healthcare regulations 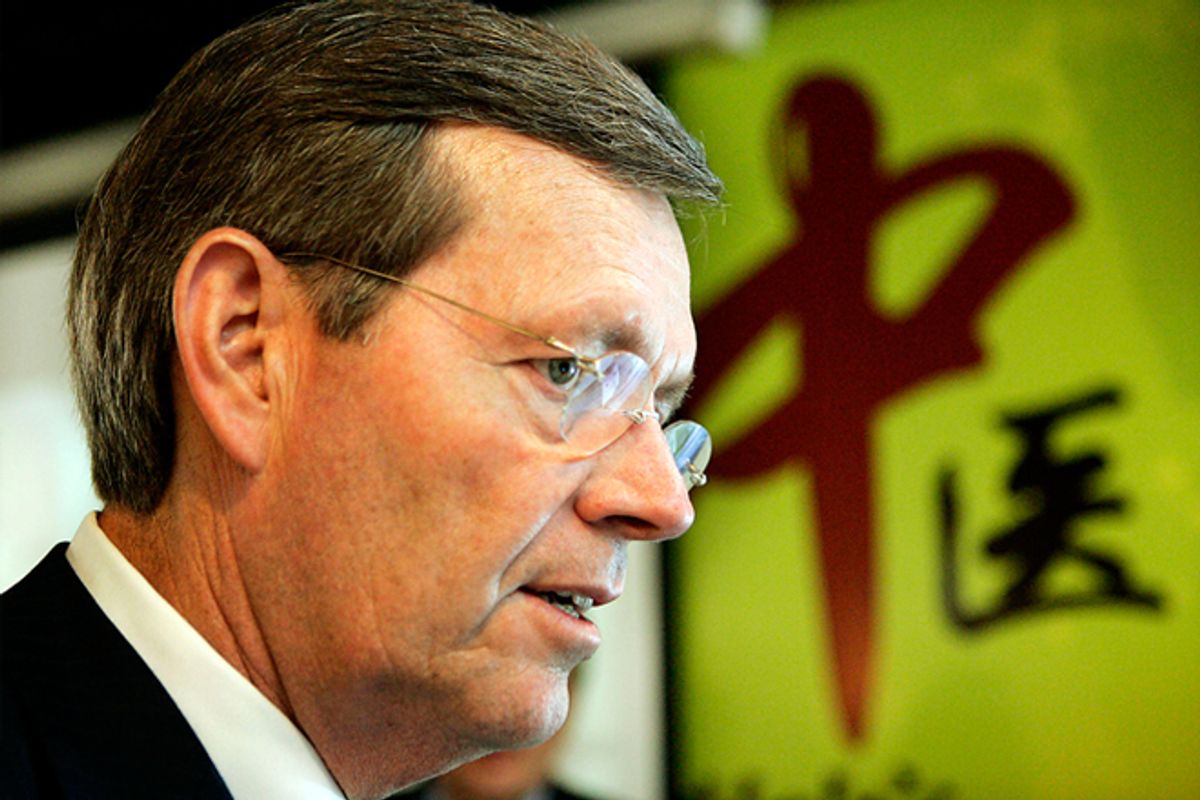 Mitt Romney has repeatedly vowed that on his first day in office, he’ll “begin replacing Obamacare,” as he said in his first TV ad. But the man who will have helped him prepare for this is someone who has also profited off the law and praised some of its provisions.

Former Utah Gov. Michael Leavitt, who appointed Romney to turn around the 2002 Olympic games, has already started leading the would-be Romney administration’s transition team and is a front-runner for the all-important gig as White House chief of staff, according to Politico.

But Leavitt, who served as Health and Human Services secretary under George W. Bush, leads a firm that has positioned itself as a leading consultancy to help implement the Affordable Care Act, and it’s already won contracts to do so.

Just two weeks ago, the company was awarded a $1 million contract with the state of New Mexico to help it build its exchanges, and Politico reported that the “size of his firm, Leavitt Partners, doubled in the year after the bill was signed as they won contracts to help states set up the exchanges funded by the legislation.”

On its website, Leavitt Partners features prominently its “Health Insurance Exchange Intelligence Team,” an entire section of the business that advises clients on how to implement and respond to the health insurance exchanges created by Obamacare.

“The passage of the Patient Protection and Affordable Care Act (PPACA) altered many of the fundamentals of healthcare coverage and financing,” the company’s website states. “Our team has a deep background and understanding of exchanges, from the policy side to the technical requirements and infrastructure necessary to operate an exchange. Our team members have unique experience in building exchanges and analyzing health insurance markets.”

Utah was the second state in the country to create health insurance exchanges -- following only Massachusetts, under an enterprising governor named Mitt Romney -- and though they were created by a successor, Leavitt is a fan of the concept. They’re “a very practical solution to a problem that needs to be solved,” he said in 2011.

When many Republican governors were bitterly resisting the implementation of the exchanges in a political war against President Obama’s chief legislative accomplishment, Leavitt strongly encouraged states to proceed with the implementation. "The law is the law,” he told an audience at the University of Minnesota's Humphrey School of Public Affairs in March.

And while he maintains that he still wants to repeal the entirety of the Affordable Care Act, his praise for the exchanges, a core component of the law, has been unequivocal.

In an April 14, 2011, interview with Bloomberg News, Leavitt admitted what every other Republican has refused to: that Obama’s health reform law is based on Republican ideas. “Now this is frankly a Republican idea that was put into the accountable care -- or the Affordable Care Act with a Democratic spin,” he said of the exchanges. “And it's a good idea if it's done correctly, if they will use government as a means of being able to create an efficient market. It's a very positive thing.”

Romney struggled to convince Republican voters during the primary that he would actually repeal Obamacare, considering that he implemented its predecessor in Massachusetts, and the choice to elevate Leavitt further complicates Romney’s already tortured relationship with healthcare reform.

Conservatives are not happy. On its blog, the libertarian Cato Institute has written numerous posts over the past two years slamming Leavitt as a profiteering charlatan. “Here we have the spectacle of a former Republican Health and Human Services secretary getting rich by helping states implement ObamaCare,” Michael Cannon wrote in June 2011. The conservative blog RedState took up the call today, declaring Leavitt is on the “wrong side” of the “Obamacare exchange battle.” Heritage Institute scholars have, in the past, also called for states to refuse to implement the healthcare exchanges as a means to undermine the overall law.

David Merritt, who led Newt Gingrich’s healthcare consultancy and was attacked by conservatives for being too cozy to Obamacare, is also a “senior advisor” at Leavitt’s firm. The Gingrich campaign had to disown an Op-Ed he wrote in March calling for states to implement the Affordable Care Act.

For those not on the far right, Leavitt’s reasonableness, if not his profiteering, on the health insurance exchanges should be welcome. And he’s right, much of Obamacare is a Republican idea -- pioneered by Heritage, Romney and Gingrich -- and it’s refreshing to see him say that. But Romney’s choice does perhaps call into question all the promises he made about Obamacare during the primary, and thus the veracity of his other promises as well.

Update:  Reached for comment, Romney spokesman Lenny Alcivar told the Daily Caller: “Unlike President Obama, voters can rest assured that a Romney Administration will put America back on track. That starts with repealing Obamacare, starting Day One. Make no mistake, the only person who will make policy decisions under a Romney Administration is Mitt Romney.”