Sorry, but he's not in better political shape now than he was four years ago 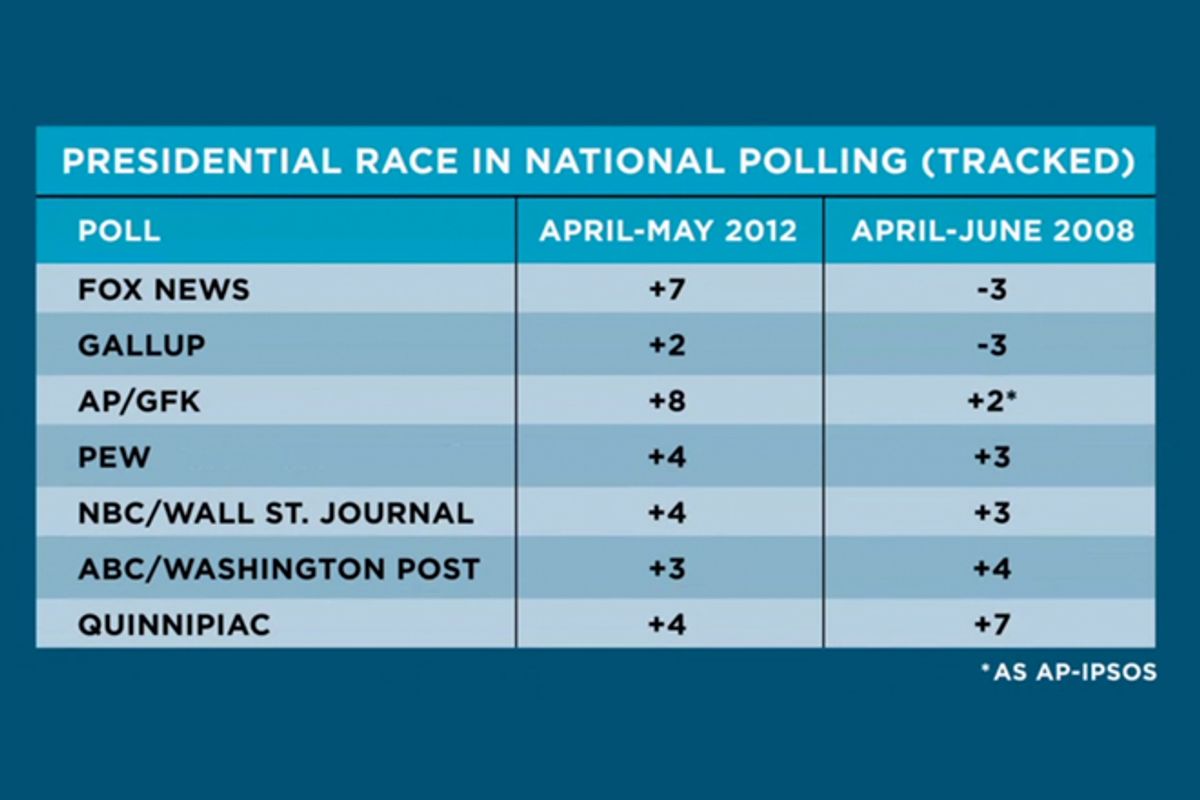 There’s nothing wrong with a campaign trying to rally its troops in the face of bad news or discouraging numbers. But the Obama campaign’s response to Mitt Romney’s improving poll position and, presumably, to last Friday’s dismal jobs report really is too much.

Not everything campaign manager Jim Messina says in the four-minute video released today is objectionable. He makes a strong case for the importance of grass-roots organizing and the strengths the Obama campaign has on that front. Fair enough. But the overall story he tells about where the race stands reeks of spin.

Messina begins the video by noting that “over the past few weeks, I’ve had people asking me about all the polls we’re seeing.” Those polls have shown Romney running an average of 1.6 points behind Obama, according to Real Clear Politics’ database, with the presumptive GOP nominee’s overall favorable rating moving up. Romney also seems to be doing better with women now than he was a few months ago, and he’s running at least even with Obama on the question of who would better manage the economy.

Messina’s first observation about this is sensible enough: “We knew this was going to be a tough race, and we knew that once Mitt Romney locked up the nomination, Republicans would get behind him and this race would be tight – just like we always knew it would be.” Hard to argue with this. A significant chunk of the GOP base resisted Romney deep into the primary season, but now that he’s their only alternative to Obama, they’re climbing on board.

But then he ventures off into spin-land:

“Here’s one more thing you can tell your friends when they ask you about the latest polls: We’re actually ahead of where we were at this point last time around. Remember the summer of 2008? Folks don’t remember it this way, but a lot of polls were saying we’d never pull it off. In fact, eight different national polls had us anywhere from neck-and-neck to down a few points. But you talked to your friends and neighbors, and voters who those polls counted out showed up on Election Day.”

This is some pretty bad revisionist history. There were polls that put Obama behind McCain in 2008, but with the exception of the GOP convention aftermath, they were all in the spring – not the summer. There’s an obvious reason for this: Obama was locked in an arduous, months-long Democratic primary campaign until June 7, when Hillary Clinton finally folded her tent.

At his lowest point during that saga – the Jeremiah Wright-dominated weeks leading up to the April 22 Pennsylvania primary – the Obama-John McCain horse race was basically even. On the day Clinton suspended her campaign, the Real Clear Politics average put Obama ahead of McCain by 2.5 points. A month later, he was up by 6. In other words, once Obama emerged as the presumptive Democratic nominee, his position improved.

But the video doesn’t account for this. For instance, it cites ’08 and ’12 results from the NBC News/Wall Street Journal poll. According to a chart in the video, an NBC/WSJ poll from this point in ’08 put Obama ahead by 3 – one point less than his lead over Romney in the newest NBC/WSJ poll. See, he’s in better shape today! The problem: The ’08 poll is actually from late April of that year – basically at Obama’s lowest moment. Not included is the first NBC/WSJ poll taken after Clinton’s June withdrawal, which put Obama ahead by 6.

The way Messina tells it, Obama’s win over McCain was the biggest surprise since Truman ’48 – a silent majority of voters emerging from nowhere and confounding the experts. That’s just not what happened, though. Obama enjoyed a steady, if not overwhelming, lead throughout the summer, fell behind after the GOP convention, overtook McCain again in mid-September, and saw his lead explode when Wall Street melted down. His 7-point Election Day victory was exactly what the experts were predicting. Once he survived the Wright drama in April, Obama was always the clear favorite to win the White House -- as basically any Democratic nominee would have been at the end of two terms of unpopular Republican rule.

This is the real reason why Messina’s claim that Obama is in better shape now than four years ago doesn’t hold water. On this date in 2008, there was good reason to expect that Obama’s lead was about to open up. He was running in a favorable climate and was just emerging from a primary battle. This time around, it’s possible that his lead over Romney will eventually balloon, but nothing about the current climate suggests it will. It’s understandable why Messina won’t admit this, but right now, Obama is definitely in a worse position than he was in ’08.