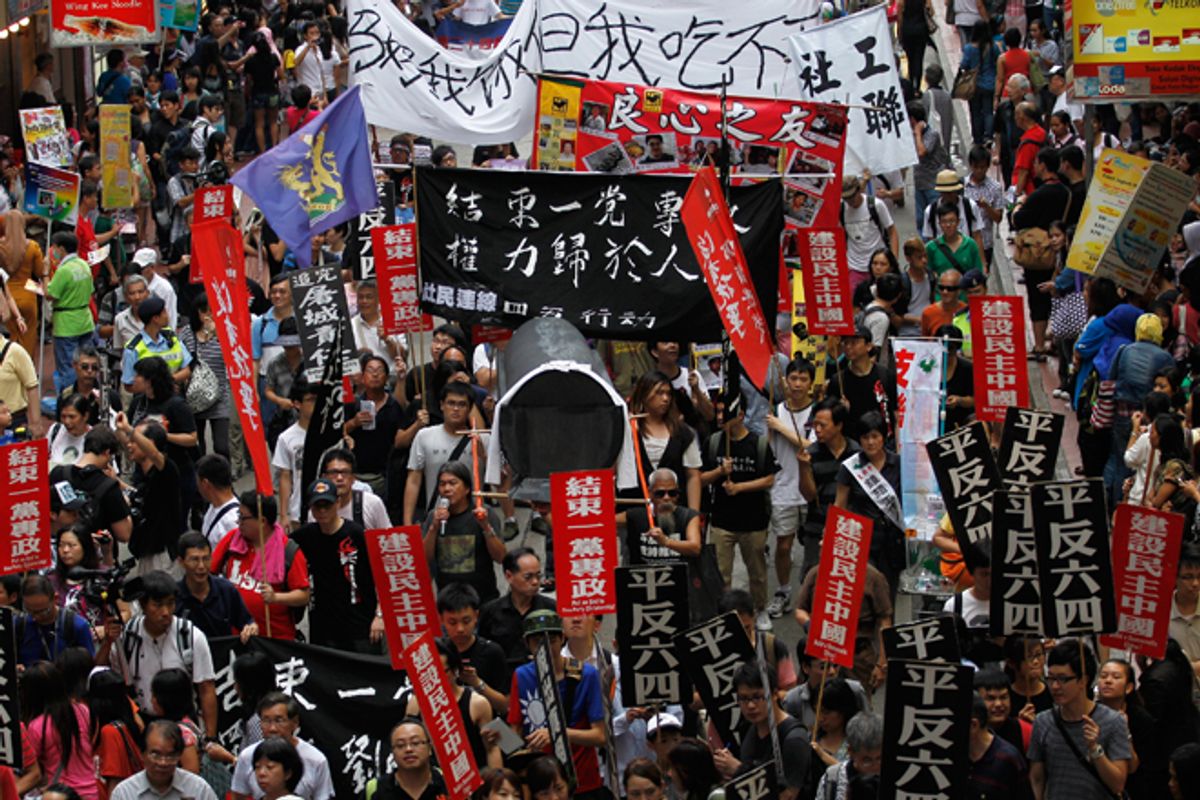 In Hong Kong, protesters take to the streets to mark the anniversary of the military crackdown on the pro-democracy protestors in Beijing's Tiananmen Square. (Reuters/Tyrone Siu)
--

HONG KONG – While talk of Tiananmen Square on the mainland was thoroughly muted, in Hong Kong, tens of thousands of impassioned protesters thronged downtown Victoria Park to mark the 23rd anniversary of the bloody crackdown.

A record-setting crowd of 180,000 showed up at the emotional two-hour event, chanting pro-democracy slogans and lighting candles to remember those who were injured or killed when the Chinese army violently suppressed student demonstrations on June 4, 1989. Estimates for the numbers killed that day range from the hundreds to the thousands.
Organizers led protesters in patriotic songs and in chanting “Remember June 4th! Democracy in China now!”

The massive event was the largest public acknowledgment of the Tiananmen Square anniversary on Chinese territory. As a “special administrative region” of China, Hong Kong enjoys a separate legal and political system from the mainland.

“This is very serious for us,” said one 26-year-old student named Don. “Chinese people don’t remember [June 4], so Hong Kong people must remember.”

The event featured a written statement from Chinese legal activist Chen Guangcheng [9], who escaped from house arrest earlier this year and is now studying law at New York University, and a video message from Wang Dan, an iconic leader of the 1989 pro-democracy protests.

Chen wrote that he hoped the central government would “give the public a satisfying reply that will stand the test of history.”

A special guest, Fang Zheng, received an enthusiastic welcome from the crowd when he appeared on stage in a wheelchair. Fang, a pro-democracy activist living in exile in the United States, had his legs crushed by a tank in Tiananmen Square.

By the end of the vigil, many of the attendees—who included mainland Chinese as well as Hong Kongers of all ages—had tear-streaked faces.

Just across the border, however, mourners on the mainland struggled to mark the day.

As in previous years, plainclothes police officers monitored Tiananmen Square for unusual activity, and there were no reported signs of protest in Beijing on Monday.

Yet one protest seems to have slipped by even the most vigilant censors. In a coincidence that seems too strange to be accidental, major movements on the Shanghai stock exchange eerily matched numbers associated with June 4th. The index opened Monday morning at 2346.98, spelling out 89-6-4 from right to left, followed by the number “23” for the anniversary; at the end of the day, it closed down 64.89 points—or, 6/4/89.

Chinese netizens immediately read significance into the figures, speculating on divine intervention, and almost as quickly, the censors caught up with them and began deleting posts containing the words “Shanghai stock” and “index.”

Experts say that the very act of suppressing remembrances of the date could inflame anger against the government.

“Instead of silencing discussion of June 4, the government reminded most internet users of the ridiculousness of the attempts to erase this event from history, and in the process furthered damaged its credibility in the eyes of many of its most sophisticated, middle-class citizens,” writes Bill Bishop, Beijing-based entrepreneur and editor ofSinocism.com [11].

Apart from its domestic censorship, Beijing expressed “strong dissatisfaction” with a US statement urging the release of prisoners locked up since 1989. A spokesman condemned the US for “making baseless allegations and interfering with China's internal affairs.” About a dozen protesters are still thought to be imprisoned.

Meanwhile, the parents of those killed in 1989 continue to wait for a government apology. Last month, Ya Weilin, the 73-year-old father of a student killed in Tiananmen Square, hanged himself after repeatedly demanding accountability from the Chinese government.

“Such a big China, such a big Chinese Communist Party, you killed my son, but you didn’t even say sorry,” he said in a video from 2004. “Are we citizens not allowed to say a single word?”