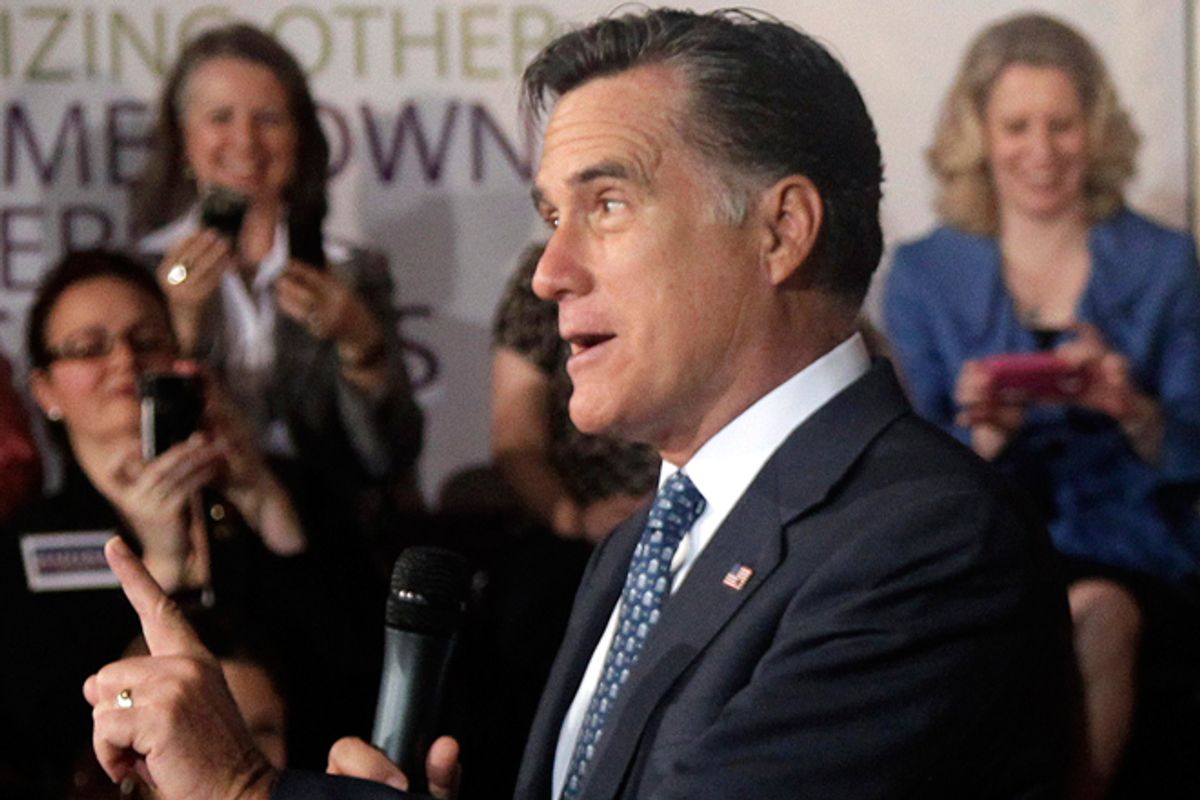 The good news for Mitt Romney is that the gender gap that exploded toward the end of the Republican nominating season seems to have narrowed. A CNN poll last Friday even showed it virtually disappearing, with Romney tailing Obama by only 2 more points among women than among men. Other polls have shown a more pronounced split, but for now, Romney isn’t enduring the wide-scale abandonment by female voters that seemed possible a few months ago.

The bad news for Romney is that there’s still plenty of time for his party to get in the way and for the gap to reemerge. Just consider what’s probably going to happen in the Senate today.

Democrats in the chamber are set to bring to the floor the Paycheck Fairness Act, which would update the 49-year-old Equal Pay Act. With women still only earning 77 cents for every dollar men take in, the bill would force companies to show proof that there’s a business justification when a female employee is paid less than a man for the same work and would allow employees to share wage information with one another without fear of retaliation by their employer.

This is clearly an issue President Obama wants to talk about. He made a surprise appearance on a White House conference call Monday to urge passage.

"If Congress passes the Paycheck Fairness Act, women are going to have access to more tools to claim equal pay for equal work,” Obama said. “If they don't, if Congress doesn’t act, then women are still going to have difficulty enforcing and pressing for this basic principle.”

But the bill is going nowhere. Republicans are set to filibuster it, and Democrats don’t appear to have anywhere close to the 60 votes they’d need to invoke cloture and pass it. (And even if the Senate passed it, there’s no reason to think the Republican House would ever pick it up.)

For Romney, the bill can’t go away quickly and quietly enough. His general election strategy depends on steering away from culturally and ideologically divisive antics as much as possible and framing the election as a simple referendum on voters’ economic anxiety. At the same time, though, he lives in perpetual fear of his party’s base, which still doesn’t really trust him. So an issue like the Paycheck Fairness Act puts him in a very tough bind: He doesn’t want to actively oppose it, because that could make it easy for Democrats to reopen the gender gap, but his fellow Republicans are strongly opposed to it and he doesn’t have the wiggle room to publicly defy them.

Romney’s way out of this jam is to ignore the subject and – when pressed to take a position – to give the answer he gave to “The Rachel Maddow Show” last night:

Of course, Governor Romney supports pay equity for women. In order to have pay equity, women need to have jobs, and they have been getting crushed in this anemic Obama economy, losing far more jobs than men. As president, Mitt Romney will create a pro-jobs business climate that will put all Americans back to work.

As non-answer answers go, you’ve almost got to admire that one. But it’s hard to square Romney’s timidity here with what Eric Cantor, the No. 2 Republican in the House, said this week will be his chief imperative as the party’s general election candidate:

“If you’re looking at an electoral strategy, my sense is that we have got to be able to talk to women and minorities in ways they identify,” Cantor told POLITICO on Monday. “When you’re looking at the independent voter, it is, in very kitchen table terms, ... about jobs and the economy. It’s about whether there is going to be health care there, whether they’re going to be able to make it through the month, in terms of their limited income in a very practical, results-oriented way.”

The Romney campaign’s calculation that the Paycheck Fairness Act will soon be forgotten may be correct, and this might not be the moment the gender gap explodes again. But it illustrates the very real constraints that Romney faces as a Republican candidate. And there are still many different ways those constraints might cost him in November.