Republicans blocked the bill to help equalize pay for women, but the White House doesn't have to give up the fight 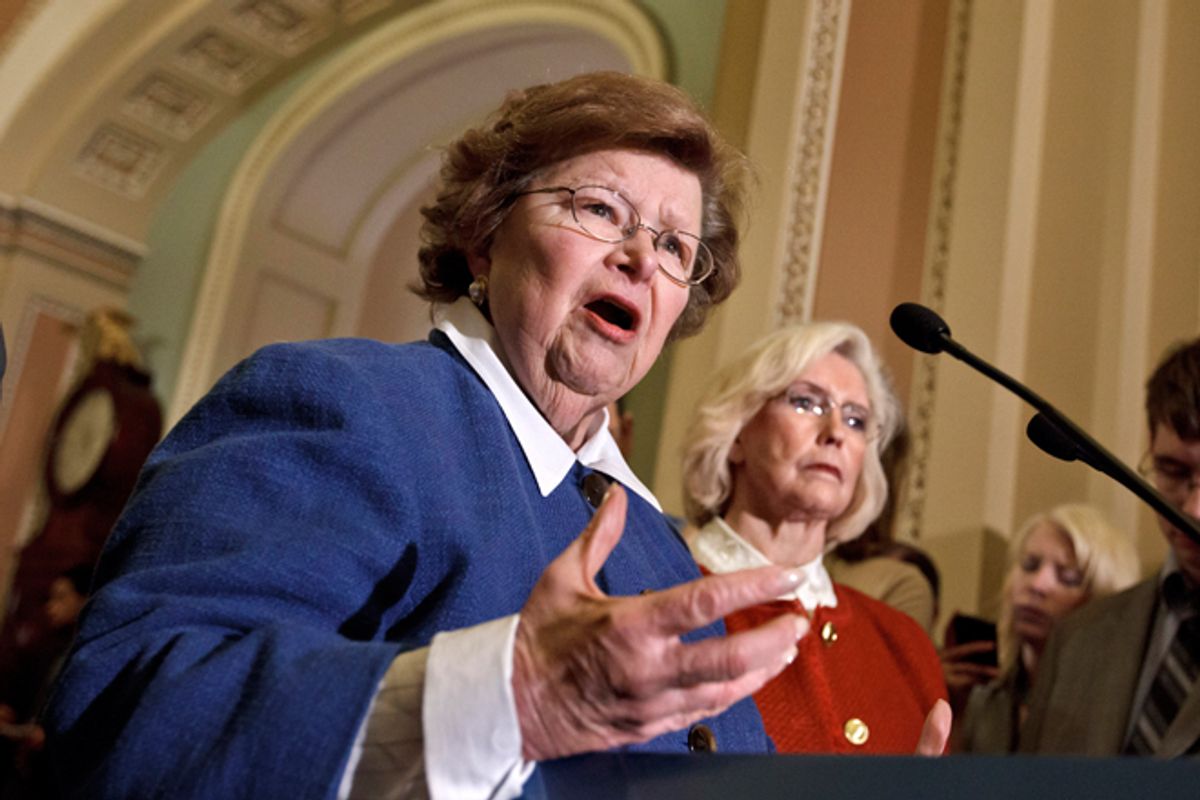 “Put on your lipstick! Square your shoulders! Suit up, and let’s fight for this new American revolution where women are paid for equal pay and equal work.” That was Sen. Barbara Mikulski’s rallying cry – but it was after the Paycheck Fairness Act had already failed along party lines.

Not that anyone was surprised. This morning’s Senate proceedings were entirely theater, with the barely acknowledged expectation that the bill would get even fewer votes than it did when the Senate last voted on it two years ago, when it also failed to garner enough votes to beat a GOP filibuster. And no one even brought up the Republican House. But today’s 52-47 vote was about keeping the gender gap drumbeat going – chiefly against Mitt Romney, who refused to ever divulge his position on Paycheck Fairness, but also in a handful of key Senate races.

As performances go, this one went right to the top  – the president himself popped up in a conference call on the vote yesterday, and the White House made a bunch of cartoon-festooned e-cards about equal pay, sent out emails about the vote, and devoted staffers’ tweets to the topic. On the Senate floor, mostly female senators taunted Republicans for not taking the opportunity to support an economic measure. But unlike the Violence Against Women Act, which clearly made them squirm and brought female Republicans into the fold, Republicans largely shrugged off the gambit.

The only exception seemed to be Nevada’s Dean Heller, currently in a tight race against Rep. Shelley Berkley. She’s missed no opportunity to paint him as anti-woman, including with his vote for the contraception-denying Blunt amendment, and perhaps as a result, she leads him among women by 10 points. (On the other hand, Heller leads her with men by 14 in that most recent poll.) He took a page from House Republican, who tried to avoid seeming pro-violence against women by presenting their own defanged bill, and introduced his own version with weaker legal recourse (or as he put it, “Democrats' war on free enterprise"). "Let me be clear, pay discrimination based on gender is unacceptable," Heller said on the floor today. "Despite the political rhetoric around here, everyone agrees on this fact. The question is, will Paycheck Fairness Act actually address workplace inequality? And the simple answer is no."

Neither bill has a future, for now at least. But they both contained a provision that would make it illegal to retaliate against employees for discussing salary, which doesn’t have to die if the White House actually wants to put its money where its mouth is. Advocates had raised the prospect of the president issuing an executive order making retaliation for pay disclosure illegal for companies with federal contracts – covering about 26 million employees. When I asked Valerie Jarrett on a conference call yesterday if the president would consider that partial measure in the event the Paycheck Fairness Act failed, she said that for the time being, the White House was focused on passing the bill.