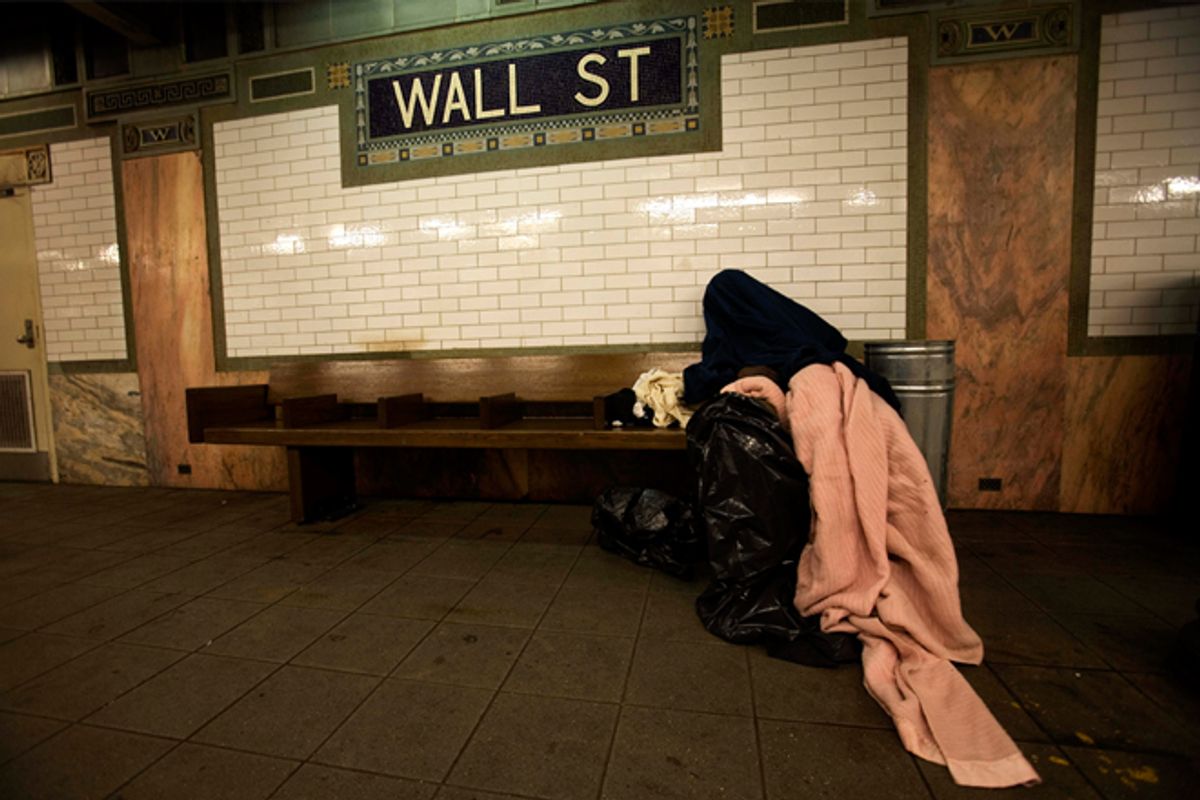 As we wait for the results of the Wisconsin recall election, a refresher course on what the struggle over the future direction of the United States is really about might be in order. Fortunately (or depressingly) the Stanford Center on Poverty and Inequality has put together a new package of easy-to-digest "educational materials on trends in inequality" that pound the message home. The gist: The United States is becoming more unequal every which way you can imagine.

Between 2009 and 2011, the press release for the project notes, "media mentions of the phrase 'income inequality' increased by over 250 percent." But changing trends in income distribution are only one part of the vast distortions rippling through American society. The slides now available for perusal at www.inequality.com are divided into 14 categories: debt, education, employment, family, gender, health, immigration, income, mobility, politics, poverty, race, violent crime, and wealth.

The most obvious insight gleanable from the charts is that class background matters. If you are poor, you are more likely to be in debt and have health problems, and less likely to get a quality education or have your priorities reflected in politics. Of course, that's always been true, not just in the U.S., but everywhere.

What's alarming is how, as the wealthiest Americans get a bigger and bigger share of the income pie, U.S. society is stratifying in dangerous, self-reinforcing directions.

For example, in 1972, families in the top income quintile spent an average of $3,536 annually on "enrichment expenditures" to "supplement their children's opportunities to learn and develop." The bottom quintile spent $835. Twenty-five years later, spending by the top quintile had more than doubled, to $8,872, while spending by the bottom quintile had only risen by about 50 percent, to $1,315, and had hardly budged at all since the early 1980s.

This may partially explain why college completion rates for richer Americans have risen faster than for poorer Americans. As the wealthiest Americans have grabbed a bigger and bigger share of overall income, they are also spending more and more on giving their own children the biggest leg up. So the split between the haves and have-nots is expanding, not just in terms of wealth, but also in educational attainment. The cycle is self-perpetuating, and the disparities are growing.

Some trends may not be correlated but are still very interesting. Over the same time period in which the private sector unionization rate for men fell from 35 percent to 10 percent, the average CEO went from earning 25 times as much as the average worker in compensation to 262 times as much.

Even our myths about ourselves are wrong. We will likely hear numerous times between now and November about how America is "the land of opportunity." But according to a slide at inequality.com, "researchers who study mobility have consistently found that there is less mobility in the United States than in most other European and English speaking countries."

In Wisconsin, Scott Walker may well fend off recall thanks to millions of dollars of campaign contributions from corporate backers eager to defend his assault on public unions and his pro-privatization agenda. If so, then in Wisconsin, the trends identified by the Stanford Center on Poverty and Inequality will continue, unchecked.