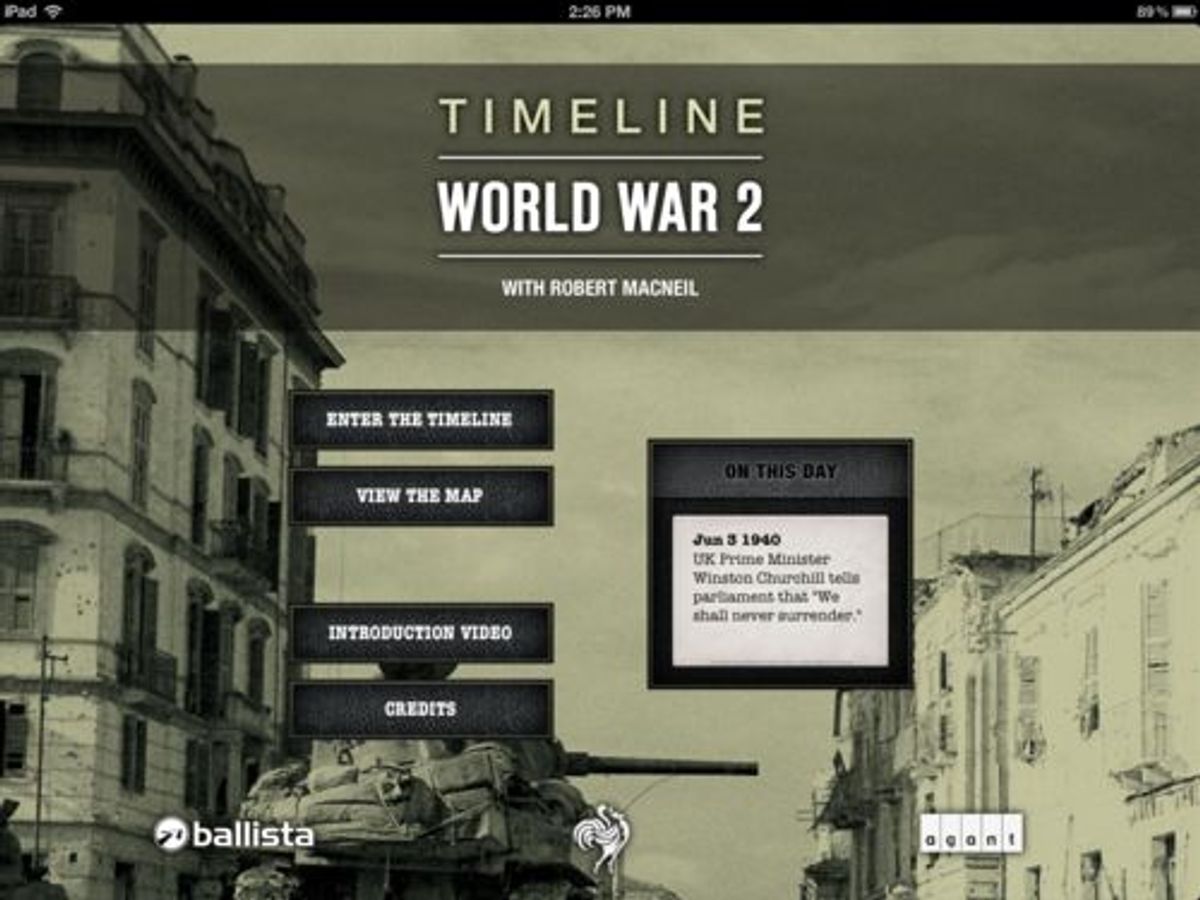 It’s not hard to guess the logic behind releasing “Timeline World War 2” at this time of year: It’s the quintessential dad app. For many people giving or getting a new iPad for Father’s Day, this Ballista Media/Agant Ltd. production handily illustrates the merits of the tablet medium by taking the material of a zillion History Channel documentaries and presenting it in a fresh new way.

But “Timeline World War 2” is not just for dads! Yes, it focuses on the military (rather than the political or social) aspects of the conflict, but to someone (like me) who’s unlikely to read a book devoted to major battles, key tacticians, warships sunk or scuttled, weapons descriptions and so on, it may be even more interesting and enlightening than it would be to an aficionado. It’s also a beautifully-designed demonstration of the iPad’s powers as a publishing platform for nonfiction. Wars are mostly strings of discrete, if related, events, which means accounts of them fit well into a timeline format. “Timeline World War 2” includes a video introduction by revered broadcast journalist Robert MacNeil, and he continues to crop up now and then as you explore it. MacNeil’s presence in the app proper is far from pervasive, however, and it’s best to think of him as a badge guaranteeing its seriousness and substance. The main panel of the app is a side-scrolling assemblage of items resembling index cards pinned to a cork board. A bar at the top indicates where you are in the years between 1939 and 1945, so you can scroll month by month — or day by day, depending on the setting of the chronological zoom adjuster, which you can set yourself. You can also drag a pointer along the top bar to a desired date. The “cards” are displayed in layers, with the most significant events in the foreground and the rest in semi-shadow behind them, so you know there’s more to drill down to. You can filter to see just the entries about battles, or those pertaining to a certain country, etc. The text is derived from two day-by-day histories of the war (one about the European theater and the other about the Pacific) written by Peter Darman and John Davison, respectively. Histories of war, especially modern wars, are tricky. Even more than most historical events, there’s a huge difference between the immediate, confusing, frightening experience of living through a war and a retrospective consideration of what actually happened and why. It’s easy to lose track of one perspective when you’re paying attention to the other. “Timeline World War 2” orders its entries with this in mind. It offers three different types of items: news-making one-day events are displayed as telegrams; accounts with a bit more perspective (the Nazi takeover of Paris, for example) look like typewritten reports, and annual overviews or biographies of the major players look like pages from a book. That’s an elegant design strategy that conveys information instantly without calling too much attention to itself. There are photos and, most captivating of all, many newsreel reports, streaming from the web. These latter are, of course, largely propagandistic; you wouldn’t want to count on them to give you an accurate picture of how the war was proceeding when they were filmed. A few come with the choice of watching with the original audio or with narration by MacNeil. Both are worth listening to; however stiff-upper-lip the British film announcers get, there’s no better way to glimpse how it felt to be a civilian in a movie theater worrying and wondering about the future and the fates of loved ones. The only disappointment in “Timeline World War 2” is the map feature, which seems to be automatically generated, a basic world map with a pushpin indicating a site mentioned in the current entry. There aren’t graphic overlays of arrows and other diagrams to explain troop movements or battle configurations, so unless you’re the sort of person who doesn’t know where Norway or Libya are, it’s not the least bit helpful.

Serious World War II history buffs may find “Timeline World War 2” too elementary; I can’t testify to that. There’s not a lot of text in it when you add it up, but text isn’t the only way to communicate in this medium. This reader, for one, found it a vivid and immersive exploration of a defining event in modern history.