Hard times for bankers: Bonus payments are down, the government is being mean, and Europe is scary 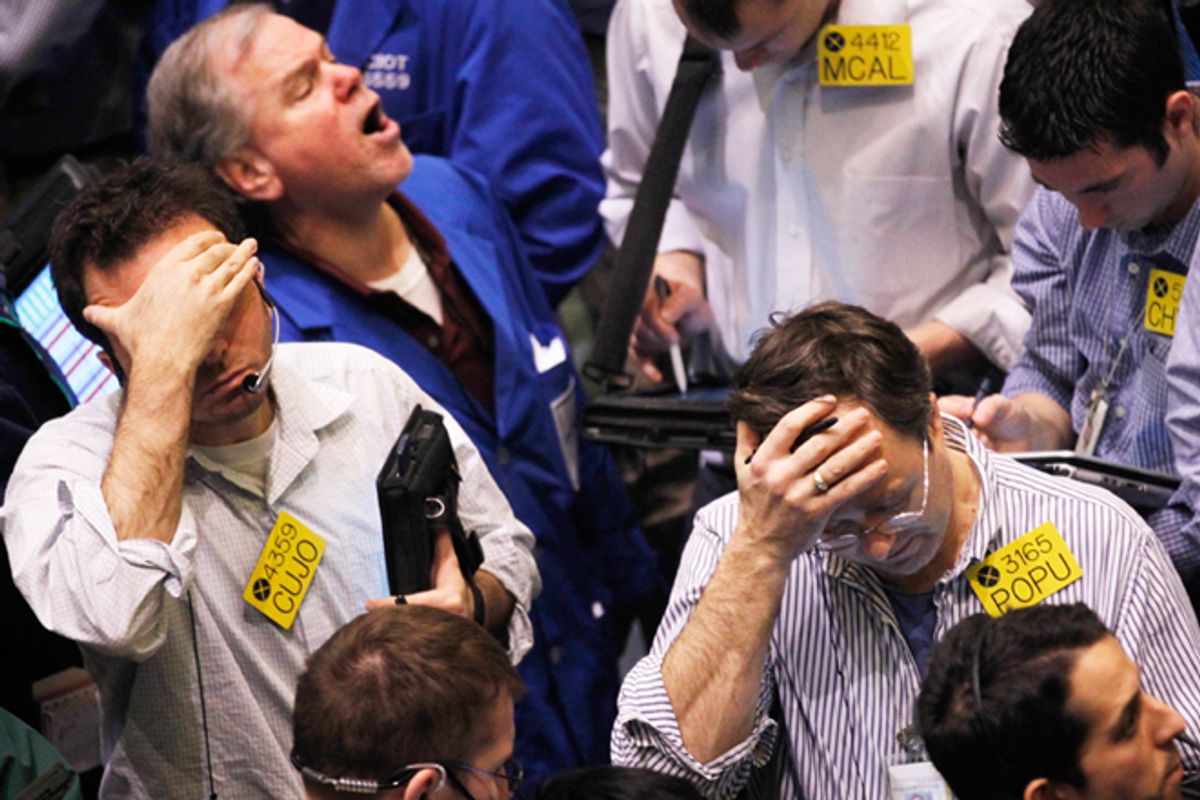 Traders on the floor of the New York Mercantile Exchange. (Reuters/Brendan McDermid)
--

Is there anything your average American is less likely to shed tears about than the news that the percentage of investment bankers who did not receive bonuses in 2011 doubled over 2010? The question probably doesn't need answering, but that doesn't mean we shouldn't pay attention to banker woe. Along with the news that Morgan Stanley is considering selling off all or part of its historically profitable commodities trading business, there's growing chatter in the business news press suggesting that Wall Street is in for a hard summer.

Fine! As I wrote in February, in response to Gabriel Sherman's big New York magazine piece, "Is this the end of Wall Street as they knew it?" there are good reasons to applaud a shrinking Wall Street. In 1986, the financial sector accounted for 19 percent of all U.S. corporate profits. By 2007, that figure had grown to 41 percent. There are very few economists willing to say, today, that it is healthy for the financial sector to account for almost half of all U.S. corporate profits.

But what we need to know is why Wall Street's hitting the rocks. It's popular on Wall Street to blame "regulatory pressure." Bank profits are in danger, runs this argument, because Obama's regulatory rampage is choking off lucrative lines of business. Even though the Volcker rule restricting banks from making big bets with their own money still isn't in effect, the bankers can see the writing on the wall, so the argument goes, especially after JPMorgan's disastrous derivatives adventures. Thus Morgan Stanley's possible move to divest itself of its commodity trading unit.

Wall Street is upset about this perceived effort to regulate away its profits and has made its displeasure known through massive lobbying and campaign finance contributions to Mitt Romney. But for the rest of us, outside of the not insignificant numbers of New York working people whose livelihood depends on big-spending bankers, it is not necessarily a disaster to see weaker profits on Wall Street. The restructuring is long overdue.

The other explanation for hard times on Wall Street is that they are a reflection of a widespread economic slowdown. That is more troubling. If there's one thing we learned about banking during the financial crisis of 2008, it's that banking is a global business, and a big disruption in one part of the world can quickly propagate elsewhere. Europe's continuing sovereign debt crisis has the big banks very worried, a fact that may be reflected in the news that cross-border bank lending took a big tumble in the final quarter of 2011. The last few weeks of discouraging economic data releases are also sounding the warning bell. The banks are hunkering down, and that is not confidence-inducing for the rest of us.

Having all this happen as the presidential election hits high gear will make figuring out what's really going on very messy. We're going to hear a lot from Republicans that regulations are killing the golden goose of corporate profits and contributing to a more broad-based economic slowdown. But what we probably won't hear, from Democrats, is that in the long run, a few punches to Wall Street's solar plexus will be good for the public health.