Doctors caught in the abortion wars 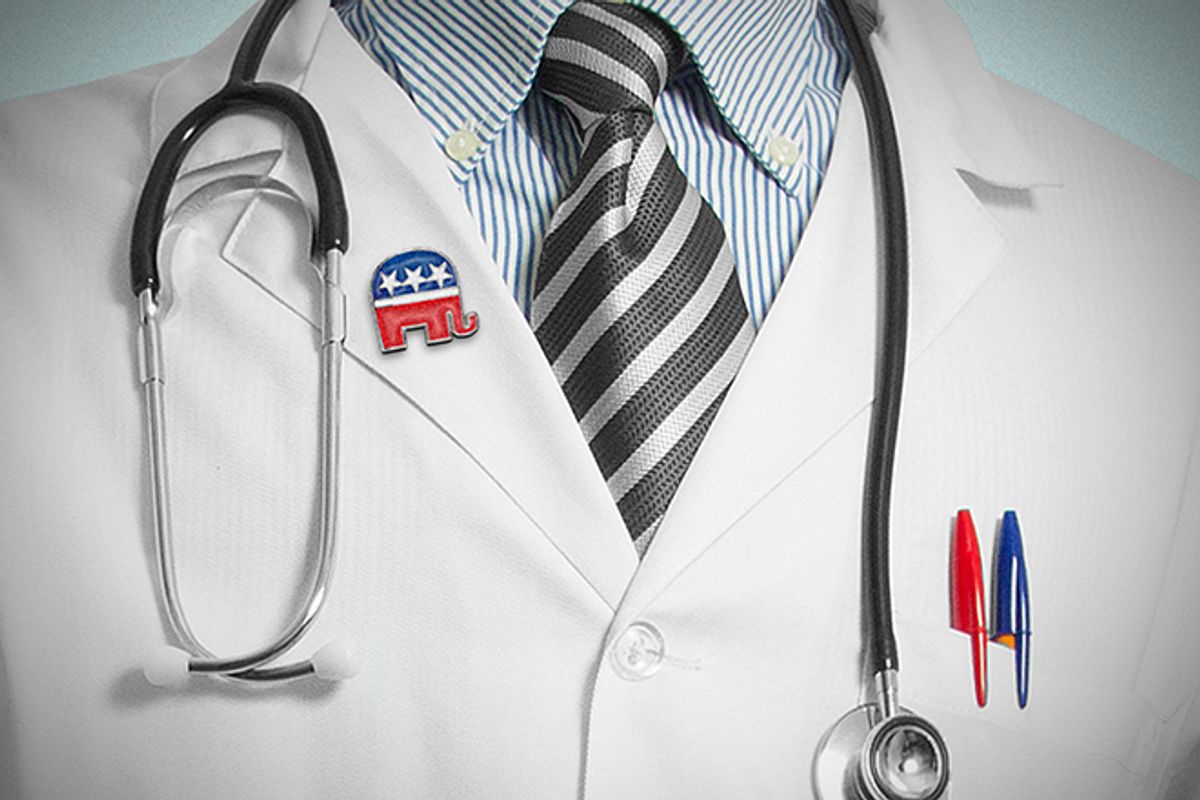 “Civil disobedience,” is what they called for. Two prominent doctors, Marcia Angell and Michael Greene -- both professors at Harvard Medical School; Angell the former editor in chief of the New England Journal of Medicine – were saying doctors should disobey some of the most common abortion restrictions.

“They should make it clear that they will not perform procedures, such as ultrasound examinations, unless they are medically indicated and desired by their patients,” Angell and Greene wrote in an Op-Ed in USA Today on May 15. “And they should refuse to provide inaccurate information about the consequences of abortion, or to follow any other prepared script in counseling their patients, particularly when it involves treating women like children.”

Doctors, of course, have long been at the center of the abortion debate, but even as that effect has intensified -- with bills and laws that specifically target and potentially criminalize them, and the politicized disregard of medical evidence pushed by a few actual antiabortion doctors -- not everyone is so willing to jump into the political fray. And for abortion providers who are already dealing with threats of violence and legal intimidation, conscientious objection is probably a tall order.

Angell and Greene also called for professional organizations like the American Medical Association and “particularly, the American College of Obstetricians and Gynecologists to take a public position on behalf of the patients they are pledged to serve, and to support their members in doing so.” But ACOG’s new president, James T. Breeden, did have a letter published in the New York Times this week, saying, “These laws are not grounded in science or evidence-based medicine,” and proclaiming, “Our message to politicians is unequivocal: Get out of our exam rooms.”

In an interview, Breeden said he thought it was time to take a stand because of the political attacks on contraceptive access. “I felt like we needed to get more involved because this has been an unprecedented change [in the political climate]," he said. “We’ve been fighting things that we thought were totally solved.”

Still, the word "abortion" did not appear in the letter.

“The fact is that ACOG is a very careful organization when it comes to reproductive rights,” says Douglas Laube, the board chair of Physicians for Reproductive Choice and Health who has previously served as president of ACOG. The organization, he says, “represents a whole spectrum of opinion on abortion, from ‘not only no, but hell no,’ to abortion on demand, to everything in between.”

The majority of the 56,000-strong membership is pro-abortion rights, but the group also contains a small but vocal antiabortion contingent, represented by a subgroup known as the American Association of Pro-Life Obstetricians and Gynecologists, or AAPLOG. (Several attempts to reach AAPLOG representatives for an interview went unanswered.) Antiabortion doctors, some of whom used to be abortion providers and have the zeal of apostates, have been a visible part of the antiabortion movement from the start, their testimony essential even when it’s disputed by the majority of the medical establishment. In fact, all four OB-GYNs in the U.S. Congress are antiabortion, most visibly Rep. Ron Paul.

Doctors' level of political engagement, and the nature of it, has long been in flux. The AMA was pivotal in passing states' 19th century abortion bans, but by the time of the Roe decision, the AMA had become convinced that illegal abortion presented a public health risk. That decision, as Linda Greenhouse has observed, "is much more a doctor’s bill of rights than it is a feminist manifesto." That's a far cry from the demonization of doctors that’s implicit in many more recent judicial and legislative moves.

By the time of Supreme Court ruling on the the so-called Partial-Birth Abortion Ban in 2007 (in which ACOG did submit an amicus brief), the suggestion was that doctors were trying to trick women into decisions that they would regret, which Greenhouse calls a "surprising adoption of a harsh and cynical view of doctors from whom women must be protected." That view had serious real-life repercussions; as Greene would write in the New England Journal of Medicine after the Supreme Court decision upheld that ban, “The ruling creates an intimidating environment surrounding pregnancy terminations at more advanced gestational ages,” because doctors could, in a complicated process in which the legal parameters were fuzzy, even accidentally violate the law.

Faced with being painted as anti-woman when one in three American women will choose to have an abortion by the age of 45, the antiabortion movement has sought to demonize providers, or as they prefer, “abortionists.” In the so-far rhetorical argument of what punishment they’d propose for women who committed “murder” if abortion were illegal as such, “pro-lifers” prefer to talk about levying penalties on doctors. With the so-called “Prenatal Anti-Discrimination Act” which failed before the House of Representatives last week, it was doctors, not women purportedly practicing sex-selective abortion, who would have faced jail.

That movement has continually found new ways to pit doctors against patients. Greene told Salon he and Angell were inspired to write their Op-Ed when they heard of a proposed Arizona law in which physicians would be protected if they withheld information from prenatal testing – say, about genetic diseases or defects -- to their patients if they thought that information would lead to abortion.

“That was the most egregious turning on its head of the canons of medical ethics that any of us could possibly imagine, that the doctor should withhold information from the patient,” Greene says. “It would be analogous to not telling a sentient adult that they have cancer.”

Beyond medical ethics, there is the issue of reliable, evidence-based information, a debate that pits the mainstream medical establishment against a stubborn minority that refuses to accept their stance – not unlike the dynamic among scientists when it comes to climate change or evolution. Greene cited Daniel Patrick Moynihan’s famous statement: “You’re entitled to your own opinions, not your own facts.” In other words, an OB-GYN may simply object to abortion on moral grounds, but supporting that position by cherry-picking medical evidence, as many do, is another story.

So far, if the professional associations have any recourse besides issuing statements, they haven’t exercised it. As Breeden puts it, “People can say pretty much anything they want, they’re not representing ACOG.”

Take the recent hearing in the House of Representatives subcommittee on a proposed ban in the District of Columbia of abortions past 20 weeks. Two of the three physicians claimed that an abortion late in gestation is never necessary to save a woman’s life, which Greene calls “blatantly false.” It was also disputed in painful detail in a letter submitted to Congress by National Abortion Federation-affiliated OB-GYN Cassing Hammond, who directs the Northwestern University Center for Family Planning and Contraception. “The witnesses claim that abortion care is never necessary to save a woman’s life and cannot be instituted sooner than 36 hours,” he wrote, saying outright that this was “untrue,” and listing specific cases to refute it.

Most such cases are complicated and uncertain. “How confident do you have to be that a woman is going to die?” says Greene. “What if there would be complete loss of renal function – does that not merit consideration? What if a woman is going to go blind if she remains pregnant? Those are the kind of nuances that are hard to make bumper stickers out of.”

One woman who had to have a life-saving later abortion did testify on the House floor, but there were more medically questionable moments. Despite the fact that the Journal of the American Medical Association published a review of the medical research and found no conclusive evidence that fetuses can feel pain at around 20 weeks, the antiabortion doctors testified -- including Colleen Malloy, who like Hammond, is a professor at Northwestern’s medical school -- that the opposite was the medical consensus. (The National Right to Life Committee rejects the peer-reviewed survey on the basis that two of the researchers had worked for pro-abortion rights organizations.) Needless to say, politicians don’t tend to be the most competent adjudicators of medical evidence.

Greene says, “Absent a 20-week fetus being able to fill out a visual analogue scale, what do you accept as proof? Pain is what people say it is.”

The same resistance is present in the debate over whether the morning-after pill blocks a fertilized egg from implanting, something that the body does naturally all the time but which Donna Harrison, the research director of AAPLOG has called "the moral equivalent of homicide.” That was in a New York Times look earlier this week at several studies suggesting that there’s no evidence that emergency contraception does anything but delay ovulation and fertilization. Still, “pro-life” doctors were recalcitrant. Presented with the substantial research that no one has been able to document implantation being blocked, that research director said “she would prefer a study with more women and more documentation of when in their cycles they took Plan B.”

In the meantime, the news media generally takes the “on the one hand, on the other” approach. Even the New York Times’ headline was conditional, despite the content in the piece suggesting far stronger refutation: “Abortion Qualms on Morning After Pill May Be Unfounded.”

Update: AAPLOG's Donna Harrison writes in an email, "ACOG makes much of representing their membership, but has never actually surveyed their membership on this critically important question." As for the issue of evidence, "We assess the medical literature according to established standard scientific analysis. Pro-life physicians and researchers are not afraid of the truth."