In the 36 hours since his win, the Wisconsin governor's profile has soared to new levels of right-wing fame 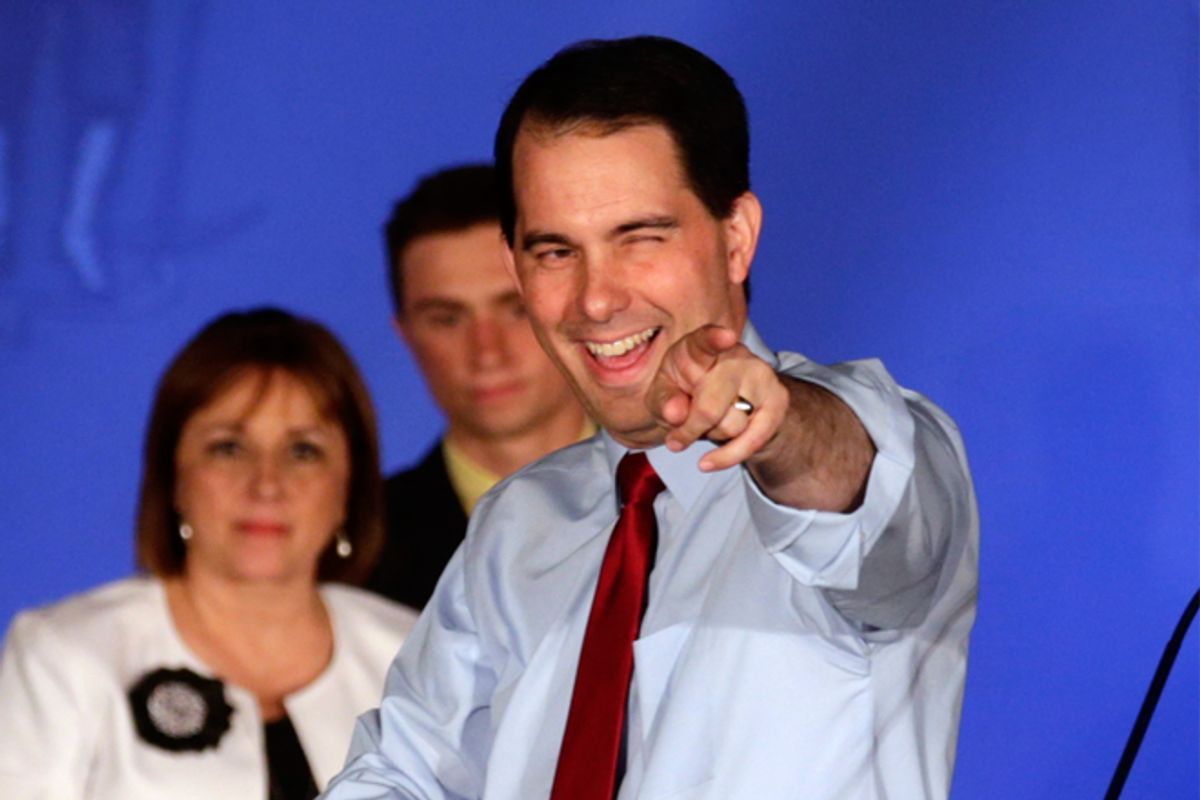 “What doesn’t kill you only makes you stronger” was always a dubious adage, but it certainly seems to be true in Wisconsin, where Scott Walker is emerging from the attempt on his political life stronger than ever. In a party where the currency is resentment and pissing off the left, Scott Walker is now richer than Mitt Romney, having repelled a liberal Pickett's Charge, and is experiencing a meteoric rise to GOP superstardom.

Some are even dropping the R word: “Since Ronald Reagan left the national stage, many have auditioned for the role of leader of the conservative movement, but no one filled the Gipper’s shoes until Scott Walker came on the scene,” Richard Viguerie of ConservativeHQ.com cooed.

In the 36 hours since his win, he’s been put up for a plum speaking spot at the Republican National Convention, earned the praise of Mitt Romney, seen other Republican governors race to tie themselves to him, and received calls for higher office. Republican National Committee Chairman Reince Priebus, himself from Wisconsin, said, “Scott Walker is in the category of bright, shining stars with big ideas in this country."

"He’s got a pretty good advocate here at the RNC,” Priebus told the Hill of the prospect of Walker getting a prime-time speaking slot at the convention in Tampa, Fla. It was a similar slot in 2004 that helped propel Illinois state Sen. Barack Obama onto the national stage and toward the presidency.

Virginia Gov. Bob McDonnell, the chairman of the Republican Governors Association and a rumored V.P. pick, said yesterday that others should follow Walker’s lead. “To me the message is that a politician that stands up and says, ‘This is what we need’ ... and the voters will reward them for it,” he said on MSNBC’s "Morning Joe." “I think that’s why he was so successful last night, and why the unions failed.”

Conservative radio host Mark Levin declared that Walker should be speaker of the U.S. House. He explained that Walker’s win is part of an “80-to-100-year process of unraveling the Leviathan and reestablishing constitutional government."

And enough pundits and activists have floated Walker as a vice-presidential pick in the past two days that he had to repeatedly deny his interest in an interview Wednesday.

Embattled Florida Gov. Rick Scott, who has suffered from dire approval ratings and some mini-scandals, immediately tried to soak up some reflected rays of the Walker glow. “Absolutely,” he replied when asked if Walker’s win validates his own policies. “What we know now is that if you run on a campaign of fiscal responsibility ... the public’s going to support you,” he told Newsmax. “That’s exactly what my race was like in 2010.”

New Jersey Gov. Chris Christie, himself a GOP star, gave himself a pat on the back for helping Walker out. "I am proud to have campaigned for him," Christie said.

This Phoenix-like rise of Walker poses two questions: First, where are the Democratic superstars? Perhaps it’s just the fact that this year saw a Republican presidential primary and ongoing speculation about vice-presidential nominees, but while it’s easy to tick off five or 10 Republicans with huge national name recognition and the ability to fire up a crowd, it’s impossible to do the same for Dems.

Second, and more important, this has to make Democrats and other progressives wonder if the recall was an enormous strategic blunder. Hindsight is 20-20, but with so much stacked against Democrats, from money to the primary calendar to Walker’s incumbency, it’s starting to look like a big misadventure that actually puts the left behind where they started. Now, instead of just having Walker in power, you have a stronger, more powerful Walker, millions of dollars spent, and thousands of dispirited activists and organizers.