We expect honesty from a physician. But sometimes doctors and patients don't want to deal with the truth 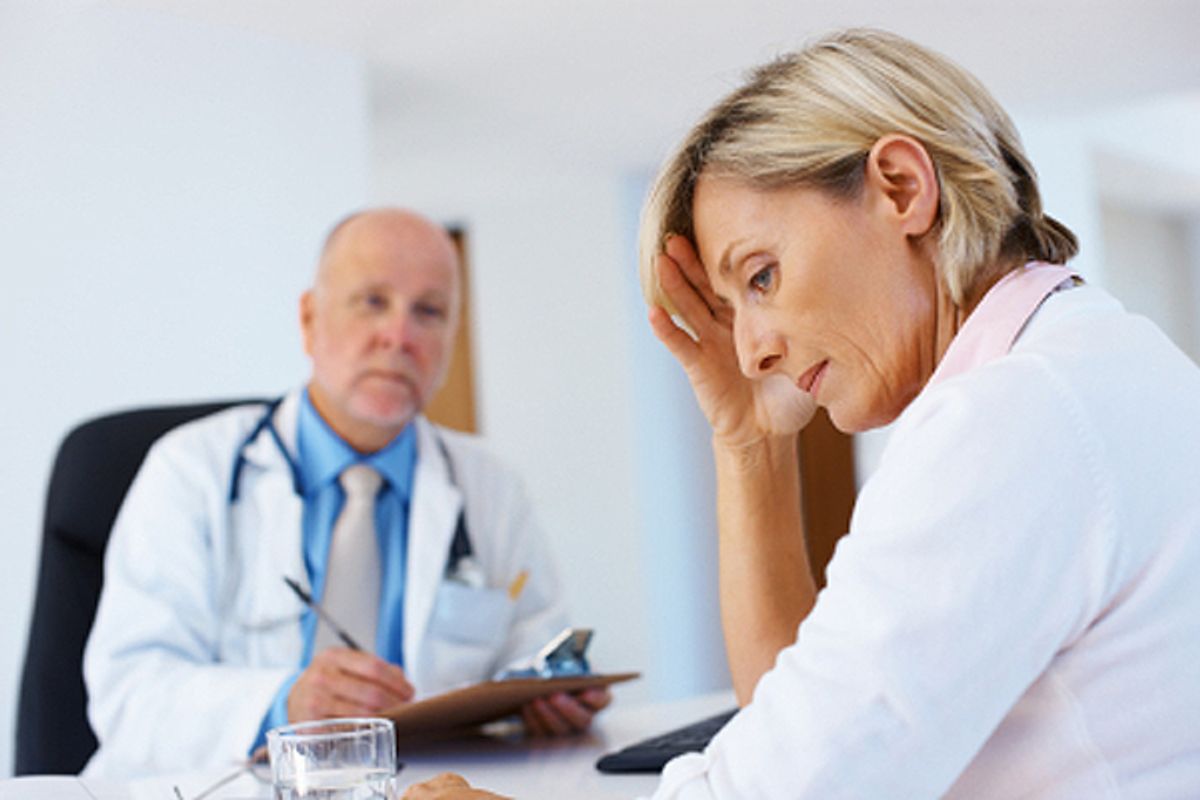 When AMC’s "The Killing" opened this season with councilman Darren Richmond (Billy Campbell) waking up in the intensive care unit of a Seattle Hospital, we saw his surgeon and his campaign manager, Jamie Wright, having a conversation. An attempt on Richmond's life had failed, but had left him paralyzed from the waist down -- requiring a difficult talk with the politician.

Wright turns to the doctor and asks, “When are you going to tell him?”

“Tell him what?” the doctor responds.

This quick scene grabbed my attention. As doctors, we are -- by any ethical standard of modern medicine -- obligated to tell our patients the truth. (Richmond's physician does tell Wright that he'll tell the councilman he is paralyzed.) But study after study of physician behavior suggests that’s not always the case -- especially when the details are about grave diagnoses like paraplegia, cancer or dementia.

In reality, the Truth between doctors and patients has always been morally hazy territory. This goes all the way back to Plato, who suggested in “The Republic” that it was just fine to trick a patient if it helped to improve his or her health. That philosophy was codified centuries later. The AMA’s first Code of Ethics, written in 1847, made a doctor’s deception acceptable by recommending doctors avoid “gloomy prognostications.” (In somewhat backward fashion, telling relatives and friends the news was just fine.) The rationale, as archaic as it may seem now, was less about subterfuge and more about preserving a patient’s psyche. In the words of one 18th-century doctor, “to prophesy death is to cause it.”

That sensibility may seem appropriate to a past, paternalistic form of medicine. But it’s been an alarmingly durable view. In the 1960s, a landmark survey of over 200 doctors revealed that 90 percent of them would not inform a patient that he or she had a diagnosis of cancer (oncology, it turns out, is where we’ve garnered much of our understanding about the ethics of truth in medicine). Many, in fact, changed the diagnosis to avoid any mention of cancer at all.

Still, as the 20th century wore on, the obligation to tell the truth took tighter hold on doctors. Medical progress drove a good bit of this shift. With antibiotics, vaccines and cleaner food and water, deaths from infection receded. Advances in disease prevention, diagnosis and treatments have given patients with many forms of the disease a chance at a cure and survival. Finally, attention to safety has sharply curbed the rate and severity of accidental injuries. Telling patients and their families the truth, doctors believed, was probably going to be easier in many circumstances because their patients were more likely to live through what ailed them.

The law also intervened, as patients brought cases before the courts accusing their doctors of withholding crucial truths. In a 1993 California case, a patient with pancreatic cancer and his family sued his doctor for failing to disclose just how poor his prognosis was (pancreatic cancer has the worst survival rate of any cancer). Had the patient known, they argued, he would have declined any therapy and tended to his affairs (his wife incurred tax losses because of poor business planning). The patient’s doctors, relying on a familiar theme, argued that had he known the truth, he would have lost hope (in over 70 doctors' visits, the patient had not expressed any desire to know his prognosis, suggesting to the doctors that he did not want to know his fate). The case made its way to the California Supreme Court, which sided with the late patient and his wife. The message to doctors was loud and clear:  Respect the autonomy of patients and, for better or worse, let them choose.

Finally, in addition to medical progress and legal precedent, new studies have shown that disclosing diagnoses does not do serious harm -- including inducing despair, depression, insomnia or other harmful psychological problems. In one study, 75 percent of patients who knew they had cancer were able to share their concerns and feelings with relatives. It also allowed patients to focus on making practical choices like writing a will or settling financial obligations. For those patients with cancer, disclosure gave them better symptom control (including pain control) and satisfaction with their care.

Thus began an era in the patient-doctor relationship where truth reigns absolute. Or did it? Take the following comments by two physicians in the Lancet, one of the leading oncology medical journals, circa 1998:  “The [Truth] has not resulted in any benefit to patients; on the contrary, it harms many of them. In the past 18 months, we have seen seven patients who died within 48 hours of being told that there is no hope of cure for their illness. These patients were enjoying a normal life ... there was no apparent cause for their early death apart from the news they had received.”

A 2001 survey of physicians revealed that over one-quarter of doctors disclosed life-threatening illnesses only between 50 and 90 percent of the time. Of those doctors who did disclose, over half chose to present the truth in only general terms, abstaining from any detailed discussion.

So after centuries of debate, could the conversation between two characters on "The Killing" really reflect where we stand? If doctors still seem stuck, it’s not out of malfeasance. There are a lot of reasons that having that direct discussion can be hard. Most of us went into medicine to help people feel better, not worse. We don’t want to be the harbinger of bad news, even though it’s what many of us see every day. Instead, we want to fight for our patients. In that respect, we are fast to focus our conversations on treatment, no matter how long the odds.

And frankly, many of us probably aren’t very good at delivering a tough diagnosis. “Communicating bad news” isn’t a course you’ll see listed in any medical school curriculum; it’s not part of any residency program I’ve ever heard of; and, most of all, there’s no way a multiple choice test (which all doctors spend mind-numbing amounts of time taking) capable of measuring your ability to do it.

But there’s a lot more to this dilemma than blaming the physician or modern medicine. Cultural norms, it turns out, have a very strong impact on determining which patients do and do not want to learn the truth. Even today, patients in many countries, including China, Singapore, Japan and Lebanon, often aren’t told by their doctors that they have cancer.  In our ever diversifying society, health professionals need to keep culture in the forefront of their minds when it comes to providing care and choices. Finally, as if substituting for the paternalism of the doctor, families often collude against telling family members with serious diagnoses the truth. My grandmother in India died of esophageal cancer; when my mother and her family found out she was sick, they kept if from her as long as they could. “Let’s just tell her she’s going to get ‘rays’ to make her feel better,” I remember my mother telling her sisters one balmy afternoon in Mumbai. Collusion, no doubt, arises out of love and concern, but leads to the same result: hiding the truth from the patient.

Finally, just as the law mandated the need for disclosure in the past, there seems to be potential to take it away as well. Several states are debating “wrongful birth” laws that would protect doctors from lawsuits should they fail to disclose prenatal birth defects. The idea, presumably, is to keep women from seeking abortions in the case that a fetus has a congenital or genetic disease.

Can we get from Truthiness to Truth? All of this left me wondering whether the best thing to do -- besides aspiring to be honest, sensitive and supportive of patients -- is to ask them well in advance of any potential serious diagnosis if and when they want to know. We do the same when it comes to the end of life, asking folks to fill out advance directives. Why not roll that into how we discuss death? In the case of prenatal testing, asking a woman whether she wants to know the details of that ultrasound could keep the courts out of the doctor-patient relationship. It’s not by any means a perfect solution, but it stands to be humane.