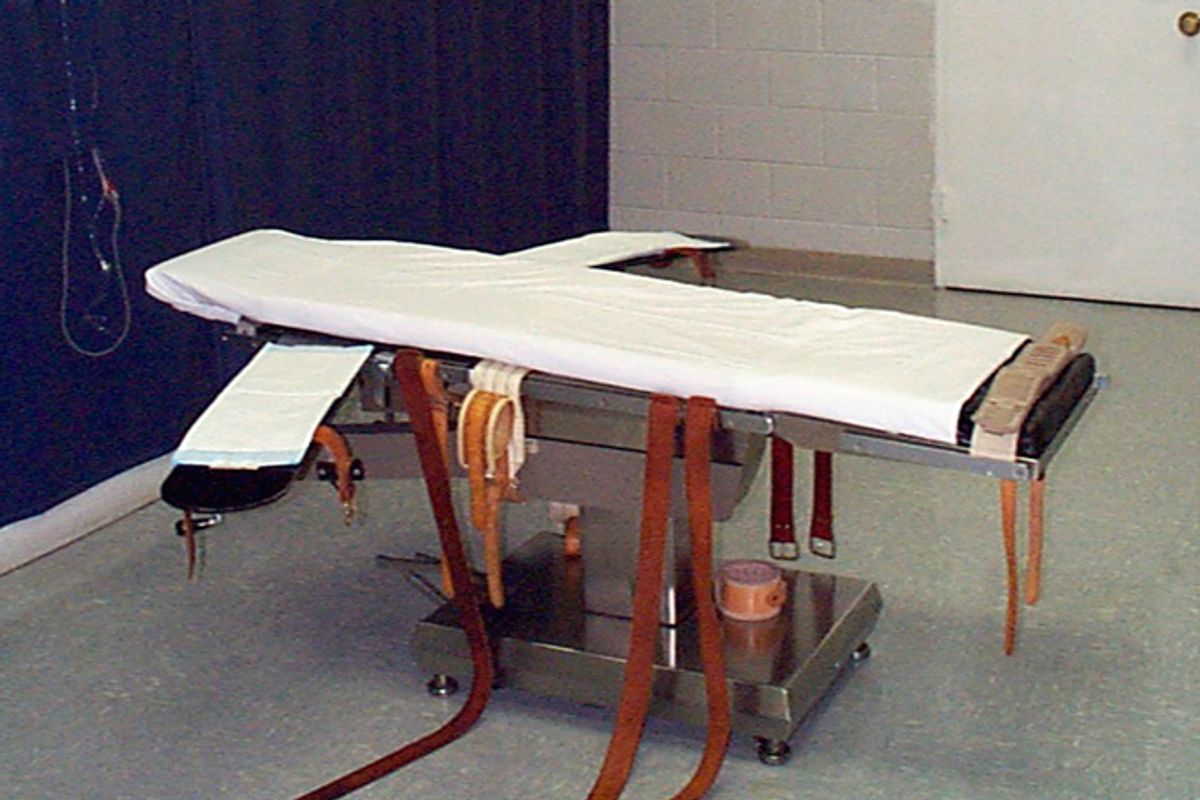 On the farm they called him King. He was the Archangel Michael incarnate, they believed, and he spoke directly to Yahweh. In his name, they stockpiled more than $120,000 worth of stolen ammunition and prepared for the Battle of Armageddon, which their King decreed would be fought in the windswept wheat fields of Rulo, Neb. If anyone left, the King said, he would “hunt down and kill” them, and they would “burn in hell.”

The King was an unemployed truck driver named Michael Ryan — and he wasn’t bluffing. He’s been sitting on death row since 1986 for the murder and ritualistic torture – razor blades and chains, sodomization and forced bestiality – of fellow cult member James Thimm. Save for those ideologically opposed to the death penalty, few would argue he deserves anything else.

And yet Ryan survives in a prison cell today, despite the state of Nebraska’s best efforts to kill him. His execution has been sidelined by the continuing fallout from a shortage in the execution drug sodium thiopental, which began in August 2009 -- a shortage that has quietly remodeled the death penalty in the United States. As states run out of sodium thiopental, they’re turning to new and questionable supplies of execution drugs. Prisoners, meanwhile, are fighting these changes at every turn: Their sentences were clear, they argue, and this wasn’t part of them.

“It has nothing to do with whether Michael Ryan or any other death row inmate deserves to die,” says Jerry Soucie, Ryan’s attorney and employee of the Nebraska Commission for Public Advocacy. “The issue is whether those people who decide they want to exercise the power to execute somebody are in compliance with the law. And if they’re not, there’s a problem. You don’t enforce the law by engaging in lawless conduct.”

In Nebraska, the effects of the shortage have been particularly acute. Nebraska has twice purchased sodium thiopental made overseas by non-FDA approved companies. (The shortage began when Hospira, the sole FDA-approved manufacturer of sodium thiopental, ceased production.) The first time, the DEA barred Nebraska from using its new thiopental for importing the drug without a proper license.

Then last November, the Nebraska Department of Correctional Services announced it had purchased another new supply of sodium thiopental from a Swiss company called NAARI AG. Immediately following the announcement, the state attorney general’s office asked the Nebraska Supreme Court to set a new execution date for Michael Ryan. But 15 days later, NAARI CEO Prithi Kochhar sent a letter to the Nebraska Supreme Court asking for the drug’s return. In his letter, Kochhar explained that the NDCS had not purchased the sodium thiopental directly from NAARI. It had, in fact, been purchased from a Calcutta, India-based middleman named Chris Harris who was not authorized to resell the drug to Nebraska.

“I knew of Chris Harris, certainly his reputation for doing business,” says Jerry Soucie, Ryan’s attorney. “No question about it, he had a shady reputation. ... I was just kind of shocked the NDCS would be dealing with him.”

According to Kochhar’s letter, NAARI supplied Harris with the drug in order to have it registered in Zambia, where they hoped to extend their coverage. Instead, Harris sold all 489 grams to the NDCS for $5,411, roughly 142 times its worth.

On May 9, after discovering the breach in its supply chain, NAARI issued a voluntary recall of the drug, noting that it was illegally diverted and could therefore be potentially unsafe. Nebraska officials have chosen not to comply with the recall, and Soucie contends they are in possession of stolen goods.

“The fact that NDCS would not honor our company recall…is a little shocking to us,” says Kochhar. “It seems that NDCS is not concerned about the effect of using an unsafe drug in any operation, not least one which might be used to end someone's life in a potentially painful way.”

And Nebraska isn’t only refusing to comply with NAARI. Last March, U.S. District Court Judge Richard Leon ruled the Food and Drug Administration was wrong to allow foreign-made sodium thiopental into the country. Furthermore, Leon ordered the FDA to notify all state correctional departments with supplies of the drug to relinquish them to the FDA. Rather than comply with that order, the Nebraska attorney general’s office asked the FDA to appeal Judge Leon’s ruling and is currently still in possession of the drug. Fourteen other states have since called for the same appeal.

“The states that are positioned better are the states looking further down the road for alternatives rather than holding on to something because they don’t want to change,” says Richard Deiter, executive director of the Death Penalty Information Center.

These states have given up on thiopental completely. As recently as May 18, Idaho announced it had switched to a lethal dose of the surgical sedative pentobarbital. Missouri recently became the first state to formally adopt the anesthetic propofol, the same drug that killed Michael Jackson. According to Deiter, Nebraska and other states resisting a change to their lethal injection protocol are only delaying the inevitable. Domestic suppliers of sodium thiopental have run dry and the drugs carry an expiration date.

“States know that as soon as they make a change, the change will be challenged in court,” Deiter says, “but not making a change is also being challenged. I think states are going to have to find a source of drugs within the United States if they’re going to carry out lethal injections in a reliable, predictable manner.”

Yet despite all of this – despite a federal ruling and company recall, despite the fact that Nebraska’s current batch of sodium thiopental was illegally imported, despite the fact that change is the only way forward – State Attorney General Jon Bruning said Ryan’s challenge is merely “a circus sideshow,” according to the Lincoln Journal Star, and Governor Dave Heineman maintains it’s simply the latest tactic employed by death penalty opponents. Both Bruning and Gov. Heineman, who continue to steer the conversation towards Ryan’s execution rather than the efficacy of the drug, declined to be interviewed.

“When the powers that be in Nebraska or wherever decide they’re going to kill someone using either stolen drugs or without the proper licensing, then why do we have a legal system at all?” Soucie says. “Why don’t we take the guy out behind the building and shoot him once in the back of the head with a 9 mm? It would be just as lawless for them to do that as it is for them to violate federal law in carrying out an execution.”

Carson Vaughan is a freelance journalist and Nebraskan currently living in Wilmington, NC.