As Clinton makes his sad apology tour, he's still not getting the credit -- or blame -- he deserves 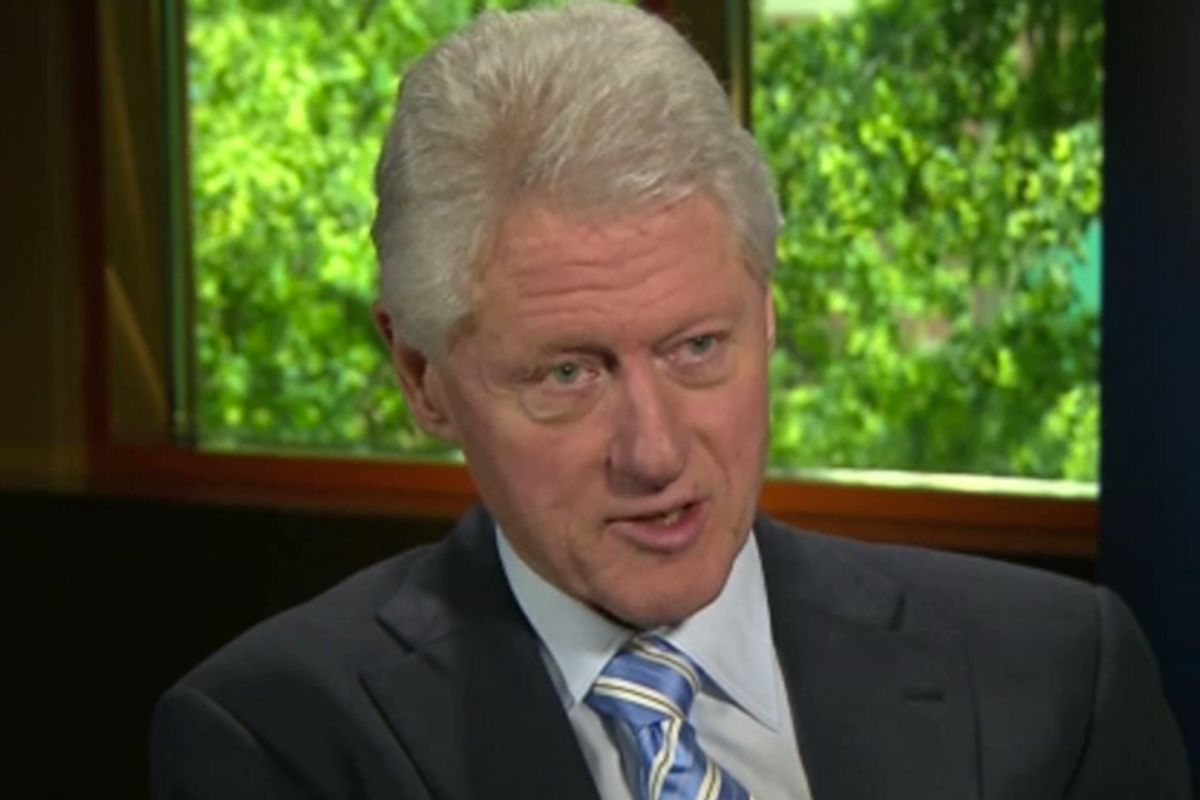 It was hard to watch Bill Clinton make the rounds apologizing over the last couple of days – even though I was furious at him for criticizing the Obama campaign's Bain Capital campaign strategy and embracing birther-in-chief Donald Trump.

Yet the former president looked tired and a little beaten up on Thursday, talking to CNN's Wolf Blitzer about the "misunderstanding" of his position on extending the Bush tax cuts for the wealthy in a Wednesday CNBC interview.  (He seemed to support maintaining the high-end tax cuts, although if you watched the whole thing, and you knew his prior statements on the issue, you could understand his complicated reasoning. Sort of.) Clinton immediately clarified his CNBC remarks in a statement and made clear that he stands with President Obama in advocating for the high-end tax cuts to expire. But he had to flagellate himself, telling Blitzer, in an interview set at the Clinton Global Initiative in Chicago, "I'm very sorry about what happened yesterday. It was what -- I thought something had to be done on the fiscal cliff before the election."

CNN's Candy Crowley said she didn't buy it. The odious Charles Krauthammer called Clinton "a raving lunatic, excuse me, psychotic … speaking in word salad." For his part, Blitzer tried hard to pit the two Democratic presidents against one another, unctuously telling Clinton: "You've got a lot of representatives of major Fortune 500 companies that are here [at CGI] trying to help create jobs and do important work. But the criticism of the president is that he's alienated some of these same big business types, Wall Street, saying some things that weren't very favorable. And many of them who supported him in 2008, they're running away from him now."

Let's unpack that – Blitzer doesn't point to anything Obama's done, just that he's said "some things that weren't very favorable." And yes, Wall Street bullies are angry that the president once called them "fat cats." All three of his chiefs of staff have had Wall Street ties, and his Treasury Department sided with the banks on almost every decision made in administering TARP, but Blitzer suggests that the president is anti-business for hurting the feelings of these Masters of the Universe, whereas Clinton is pro-business, apparently because he's better at sucking up to him.

If you look at what he's actually done, if you look at the tax policies, the regulatory policies he's actually pursued, they were either necessary -- we had to have higher capital requirements on bank lending after that financial meltdown. You can't have people taking the kind of risks that were taken….If you look at his record, as opposed to what people say, what the Republicans say about him, I think he has been, you know, quite moderate and very interested in getting business input. Look at this Business Council he's got…

So I -- I just -- I don't buy that he's anti-business. He's -- he's -- has some differences from people who believe that the financial crisis we went through and the burdens the American people still bear because of it, that these things don't justify any increased requirements of oversight. I think they do. I think that we know from time immemorial about capitalism's tendency to implode…It would be good for the economy, to minimize the kind of risks that caused the meltdown last time.

Wow. Are Clinton's recent GOP admirers – the same ones who savaged and impeached him when he was president – going to call him a socialist now, as they do Obama?

Bill Clinton has a complicated legacy with which progressives still need to reckon. He won back the White House after three straight terms of GOP dominance and two soul-crushing Republican landslides. He did it with a complicated and not always pretty combination of courting big business while trying to do something for their victims, the folks who "work hard and play by the rules." He acceded to a GOP version of welfare reform while expanding the Earned Income Tax Credit (signed by Gerald Ford but now despised by the GOP), vastly expanding support for low-wage workers. He signed the Family and Medical Leave Act, a tiny step toward the kind of family support policy the rest of the developed world has long enjoyed, as well as the repeal of Glass-Steagall restrictions on turning banks into casinos. He bears some responsibility for "the kind of risks that caused the meltdown last time," and he occasionally takes that blame. His legacy can't be summed up in a CNN segment.

Or an MSNBC segment, either. Strangely, waiting to talk about Clinton's latest campaign-trail gaffes on  "Hardball" Wednesday, I had to sit silently through an interview with Mark Penn, last seen trying to bilk Hillary Clinton after helping destroy her presidential campaign. He and the National Journal's Matt Cooper were weighing in on why white men, particularly working-class white men, don't support this president. It was painful, at least partly because Bill Clinton is supposed to be Obama's ambassador to that troubled demographic, but instead he's going around apologizing for himself.

Penn sometimes purports to be an expert on the male vote, advising Hillary Clinton, for instance, that she had to be more macho than her male rivals for the presidency to win over male voters, and thus couldn't apologize for her vote authorizing the Iraq war. But on Wednesday, Penn urged Obama to forget about white working-class men. "My suggestion really is to go after the soccer dads, the college educated, who can appreciate a president like Barack Obama … Frankly, he's a more sophisticated candidate … who appeals to better educated men who live in the suburbs and have kids."

Excuse me? The highly paid Penn, whose P.R. firm has represented the largest tobacco, oil, auto and tech companies and has participated in busting unions, didn't say anything about why white working-class men might have genuine reason to be angry, that they're not merely racist or stupid  or "unsophisticated." Matt Cooper at least tried, noting, "Part of it's what's happening to the economy, working-class men feeling more dispensable and vulnerable, feeling like the world's not theirs anymore." Of course, nobody noted that Obama actually got a higher share of working-class white votes than his white Democratic forebears John Kerry, Al Gore and (in his first election) Bill Clinton. So the problem isn't only about race, it's about Democrats. Now, it's about Democrats at least partly because they've been perceived as the party advancing the interests of racial minorities -- but in the same period, they've also come to advance the interests of Wall Street and big business, while wages for the working class of every race decline. This issue can't be unraveled in a cable news conversation; that's why I'm writing a book about it.

Anyway: When we got to talking about Clinton, Time's Joe Klein actually reached back into the Penn segment on white men to praise Clinton as the last Democrat who related to them. But what he chose to highlight about Clinton's appeal was this: "He was living the dream! He was dating lounge singers and going to McDonald’s."

Joe Klein knows better than that. It was his 2002 book "The Natural" that crystallized for me how much Clinton had accomplished, sometimes under the radar, on the economic front for middle- and working-class people. He was being funny, I guess. But between Penn and Klein, I thought, No wonder white working-class men hate Democrats. What contempt we show them. When it was my turn, I noted that Clinton actually won over working-class whites by promising to look out for people who "work hard and play by the rules," as well as presiding over the only income growth they've seen since the mid-1970s. But at the same time, I pointed out, he led the way in making the party friendlier to Wall Street, and in privileging the financial sector over all others, cutting capital gains taxes even as he raised top rates for the wealthy. You can see it below.

I've been seething over those two segments ever since Wednesday, and watching Clinton have to apologize to Wolf Blitzer made me even angrier. The flawed former president finds ways to undermine himself; he always has. But he deserves better than he gets from the GOP, the media – and fellow Democrats. Our bipartisan elite just loves to look down on white working-class guys, even when they get to be president.