Is there any reason to read?

Books are considered a culture's memory. But since we keep repeating our mistakes, maybe we shouldn't bother 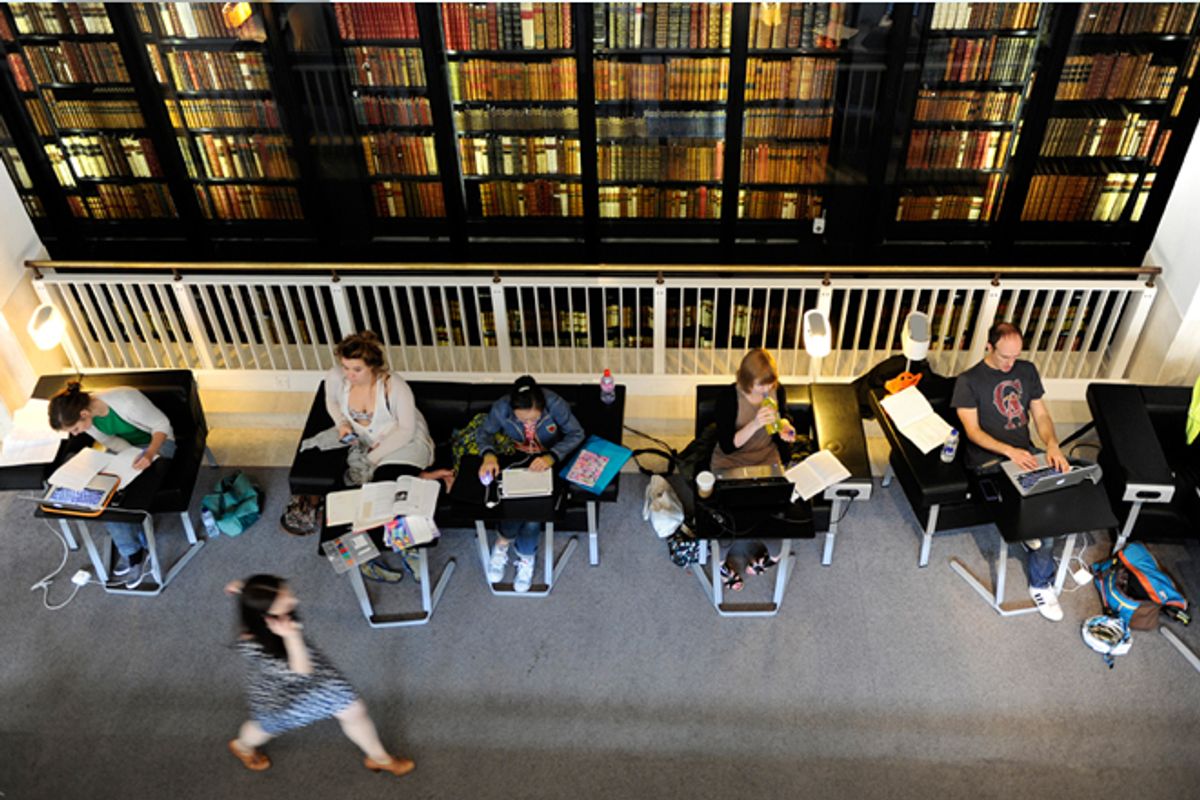 People studying at the British Library in London. (Reuters/Paul Hackett)
--

For reasons that are still mysterious and which, perhaps, if revealed, might seem banal, in the eighth year A.D. the poet Publius Ovidius Naso was banished from Rome by the Emperor Augustus. Ovid (his three names reduced to one by centuries of devoted readers) ended his days in a backwater village on the west coast of the Black Sea, pining for Rome. He had been at the heart of the heart of the empire which, in those days, was synonymous with the world; to be banished was for Ovid like a death sentence, because he could not conceive of life outside his beloved city. According to Ovid himself, at the root of the imperial punishment was a poem. We don't know what the words of that poem were, but they were powerful enough to terrify an emperor.

Since the beginning of time (the telling of which is also a story), we have known that words are dangerous creatures. In Babylon, in Egypt, in ancient Greece, the person capable of inventing and recording words, the writer, whom the Anglo-Saxons called "the maker," was thought to be the darling of the Gods, a chosen one on whom the gift of writing had been bestowed. According to Socrates, in a legend which he either retold or imagined, the art of writing was the creation of the Egyptian god Theuth, who also invented mathematics, astronomy, checkers and dice. In offering his invention to the Pharaoh, Theuth explained that his discovery provided a recipe for memory and wisdom. But the Pharaoh wasn't convinced: "What you have discovered," he said, "is not a recipe for memory but for reminder. And it is not true wisdom that you offer your disciples, but only its semblance, for by telling them of many things without teaching them, you will make them seem to know much, while for the most part they know nothing, and are filled not with wisdom but with the conceit of wisdom."

Ever since, writers and readers have debated whether literature effectively achieves anything in any society, that is to say, if literature has a role in the making of a citizen. Some, agreeing with Theuth, believe that we can learn from literature, sharing the experience of our predecessors, making us wise by granting us the memory of centuries of knowledge. Others, agreeing with the Pharaoh, say with the poet W. H. Auden that "poetry makes nothing happen," that the memory preserved in writing does not inspire wisdom, that we learn nothing through the imagined word and that times of adversity are proof of writing's failure.

It is true that, confronted with the blind imbecility with which we try to destroy our planet, the relentlessness with which we inflict pain on ourselves and others, the extent of our greed and cowardice and envy, the arrogance with which we strut among our fellow living creatures, it is hard to believe that writing -- literature or any other art, for that matter -- teaches us anything. If after reading lines such as Philip Larkin’s “The trees are coming into leaf,/ Like something almost being said,” we are still capable of all such atrocities, then perhaps literature does make nothing happen.

In at least one sense, however, all literature is civic action: Because it is memory. All literature preserves something which otherwise would die away with the flesh and bones of the writer. Reading is reclaiming the right to this human immortality, because the memory of writing is all-encompassing and limitless. Individually, humans can remember little: Even extraordinary memories such as that of Cyrus, king of the Persians, who could call every soldier in his armies by name, are nothing compared to the volumes that fill bookstores such as this one. Our books are accounts of our histories: Of our epiphanies and our atrocities. In that sense all literature is testimonial. But among the testimonies are reflections on those epiphanies and atrocities, words that offer the epiphanies for others to share, and words that surround and denounce the atrocities so that they are not allowed to take place in silence. They are reminders of better things, of hope and consolation and compassion, and hold the implication that of these too, we are all of us capable. Not all of these we achieve, and none of these we achieve all the time. But literature reminds us that they are there, these human qualities, following our horrors as certainly as birth succeeds death. They too define us.

Of course, literature may not be able to save anyone from injustice, or from the temptations of greed, or the miseries of power. But something about it must be perilously effective if every dictator, every totalitarian government, every threatened official tries to do away with it, by burning books, by banning books, by censoring books, by taxing books, by paying mere lip-service to the cause of literacy, by insinuating that reading is an elitist activity. William Blake, speaking about Napoleon in a public address, had this to say: "Let us teach Buonaparte, and whosoever else it may concern, that it is not Arts that follow and attend upon Empire, but Empire that attends and follows the Arts." Napoleon was not listening then, and minor Napoleons are not listening today. In spite of thousands of years of experience, the Napoleons of this world have not learned that their methods are ultimately ineffective, and that the literary imagination cannot be annihilated, because it is that imagination, and not the imagination of greed, that is the surviving reality. Augustus may have exiled Ovid because he knew (and was probably not mistaken) that something in the poet's work accused him. Every day, somewhere in the world, someone attempts (sometimes successfully) to stifle a book which plainly or obscurely sounds a warning. And again and again, empires fall and literature continues. Ultimately, the imaginary places writers and their readers invent  -- in the etymological sense of "to come upon," "to discover" -- persist at all because they are simply that which we should call reality, because they are the real world revealed under its true name. The rest, as we should have realized by now, is merely shadow without substance, the stuff of nightmares, and will vanish without a trace in the morning.

In the second part of "Don Quixote," the Duke tells Sancho that, as governor of the Isle of Barataria, he must dress the part: “Half as a man of letters and half as a military captain, because in this island which I bestow upon you arms are as necessary as letters and letters as arms.” In saying this, the Duke not only refutes the classical dichotomy but also defines the obligatory concerns of every governor, if we understand the one to mean action and the other reflection. Our actions must be justified by our literature and our literature must bear witness to our actions. Therefore to act as citizens, in times of peace as in times of war, is in some sense an extension of our reading, since our books hold the possibility of guiding us through the experience and knowledge of others, allowing us the intuition of the uncertain future and the lesson of an  immutable past.

Essentially we haven’t changed since the beginning of our histories. We are the same erect apes that a few million years ago discovered in a piece of rock or wood instruments of battle, while at the same time stamping on cave walls bucolic images of daily life and the revelatory palms of our hands. We are like the young Alexander who, on the one hand, dreamt of bloody wars of conquest and, on the other, always carried with him Homer’s books that spoke of the suffering caused by war and the longing for Ithaca. Like the Greeks, we allow ourselves to be governed by sick and greedy individuals for whom death is unimportant because it happens to others, and in book after book we attempt to put into words our profound conviction that it should not be so. All our acts (even amorous acts) are violent and all our arts (even those that describe such acts) contradict that violence. Our world exists in the tension between these two states.

Today, as we witness absurd wars wished upon us less from a desire for justice than from economic lust, our books may perhaps help to remind us that divisions between the good and the bad, just and unjust, them and us, is far less clear than political speeches make them out to be. The reality of literature (which ultimately holds the little wisdom allowed us) is intimately ambiguous, exists in a vast spectrum of tones and colours, is fragmented, ever-changing, never sides entirely with anyone, however heroic the character may seem. In our literary knowledge of the world, we intuit that even God is not unimpeachable; far less our beloved Andromaque, Parzifal, Alice, Candide, Bartleby, Gregor Samsa, Alonso Quijano.

And yet, at the same time, that essential ambiguity of literature is neither arbitrary nor unclear. Praising the supposed Arabic author of "Don Quixote" for the excellencies of his story, Cervantes has this to say: “The book depicts thoughts, unveils imaginings, answers unspoken questions, clarifies doubts, resolves arguments, and finally reveals the very atoms of the most curiosity-driven desire.” In times of crisis, real or invented, almost any book, any real book, can accomplish for us all these things as well. Perhaps in this lies our hope.

Alberto Manguel is an internationally acclaimed anthologist, translator, essayist, novelist, and editor as well as the bestselling author of several award-winning books, including "The Dictionary of Imaginary Places" and "A History of Reading." His latest novel, "All Men Are Liars" (Riverhead), was published this month.