After Sunday\'s crash that killed 159 people, Nigerians express anger at the airline and the government 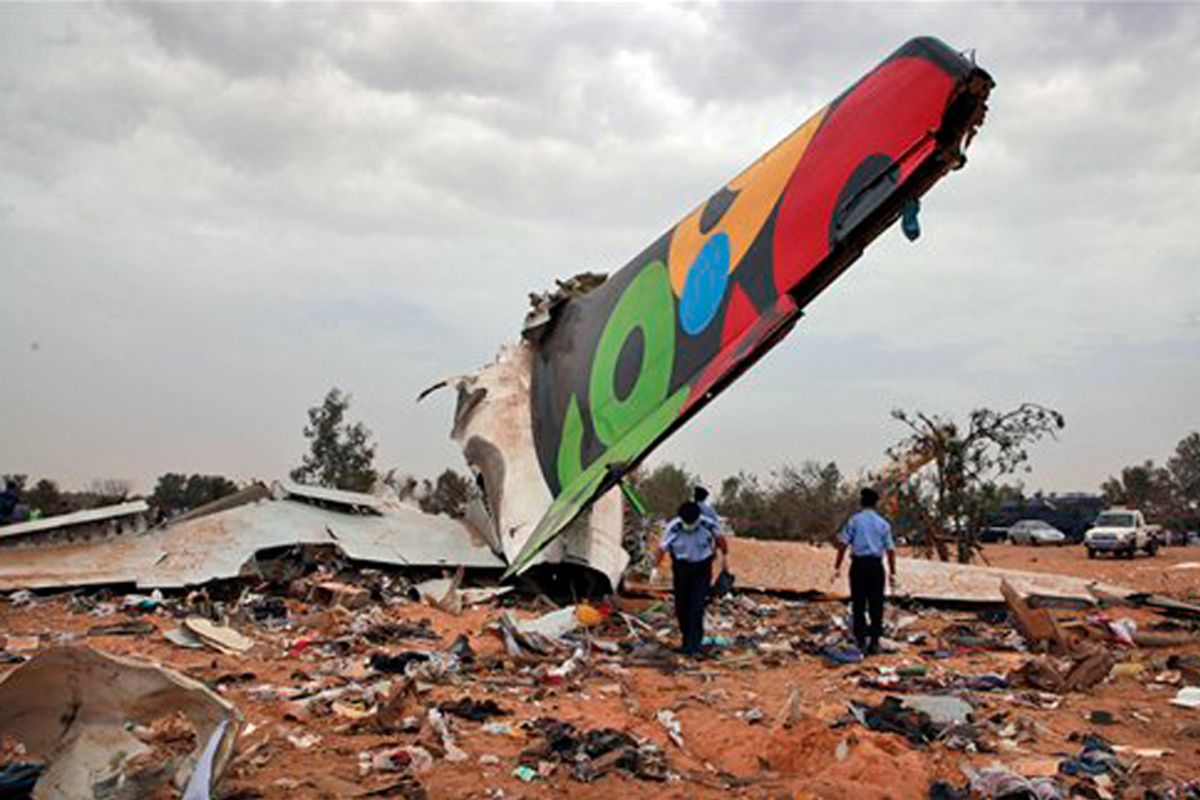 ABUJA, Nigeria — Following the air crash in Lagos which killed at least 159 people Sunday, analysts warn that corruption and poor leadership make it difficult for the government to improve Nigeria’s air safety.

Nigerian authorities say they have finished recovering the human remains from the site of the Dana Air crash that killed all 153 of the people on board and an estimated six others on the ground.

Lagos State Attorney General Ade Ipaye said 52 bodies have been identified and that he cannot yet confirm the final death toll. "I think we can only be sure of the number at the end of the scientific investigation," he told reporters in Lagos Wednesday, according to Associated Press [8].

Recognizing the significance of the horrific crash, President Goodluck Jonathan went to the site.

"I'm here with members of the National Assembly, and we will thoroughly investigate this,” said Jonathan, one day after the disaster. “And the technical team will carry out their responsibility to tell us what went wrong."

Despite Jonathan’s assurances controversy rages over the cause of the air tragedy in which the plane from Abuja crashed into a crowded Lagos neighborhood, destroying four buildings, killing some residents, and displacing dozens of others.

Dana Air managers were told the plane was dangerous before it was in the air, according to Channels TV [9], which quoted an anonymous airline official. Those managers feared for their safety and fled Nigeria for their home country, India, reported Leadership Newspapers [10].

Dana Air officials denied that the plane was faulty, saying a bird may have caused the crash, according to Nigerian newspaper, Punch [11]. But Aviation Minister Stella Oduah said the crash was a result of engine failure, according to Reuters [12].

The “black box” has been sent to the US for examination and is expected clarify what caused the engines to fail.

Last month the airline had to conduct an emergency landing for a plane that had a faulty hydraulic system. Dana Air says it was a different plane that crashed Sunday.

The Nigerian government has suspended the 4-year-old airline’s license and promised safety audits for all airlines in the country. Dana Air says victims will be compensated through their UK-based insurance company.

Although there is public anger at Dana Air, even great blame is placed on the government, according to political analyst and transport industry expert Bello Ibrahim Turkin Gwandu.

In Nigeria, it is commonly believed that private companies avoid complying with government regulations by paying off officials. If Dana Air’s plane was faulty, many Nigerians would assume the company paid an inspector to allow the aircraft to fly, even if the allegations are not true.

Accidents do happen, said Gwandu, but with Nigeria’s dismal air accident record he expects the government to lose more of its already-dwindling public confidence that has been shaken by security crises like militant attacks in the north, a shaky peace in the south, and sectarian violence in the Middle Belt.

The Lagos crash came just a day after a cargo plane from Nigeria crashed in Ghana, killing at least 10 people when it hit a bus and a motorcycle. In the past two decades, nearly 1,000 people have been killed in plane crashes in Nigeria, according to a Reuter’s timeline [15].

Most of these deaths were before 2006 when, after a series of deadly crashes, Nigeria passed new legislation and improved its air record so that it eventually earned a US Federal Aviation Authority Category 1 safety rating.

Air travel in Nigeria and all of Africa remains relatively dangerous. The International Civil Aviation Organization reports that in 2010 the accident rate for air traffic in Africa was more than four times the global average.

Gwandu said last weekend’s accident appeared to be a major setback in what was looking like a trend towards safer skies in Nigeria.

“Why should it always be in Nigeria?” he said, referring to the question he said Nigerians are asking themselves. “It’s quite sad.”

International relations analyst Aderemi Oyewumi said the crash will also undermine Nigeria’s image abroad, making it harder for the government to implement some of its key programs, like attracting private foreign investors.

Many foreign nationals were on board the Dana Air flight including Chinese, French, Lebanese, Canadians and at least eight Americans.

“The perception outside would be of a country that is not able to grapple with its problems,” he told GlobalPost. “Foreign policy is like charity: it begins at home.  The way you conducts yourself domestically impacts the way people think of you.”

Oyewumi said the government could recover from the wreckage by vigilantly monitoring airlines, firing lax management, and fighting corruption in the industry.

“It’s a multi-faceted problem,” he said. “The government should take a holistic approach.”