The former candidate has created his own PAC, but don't expect him to make much of an impact 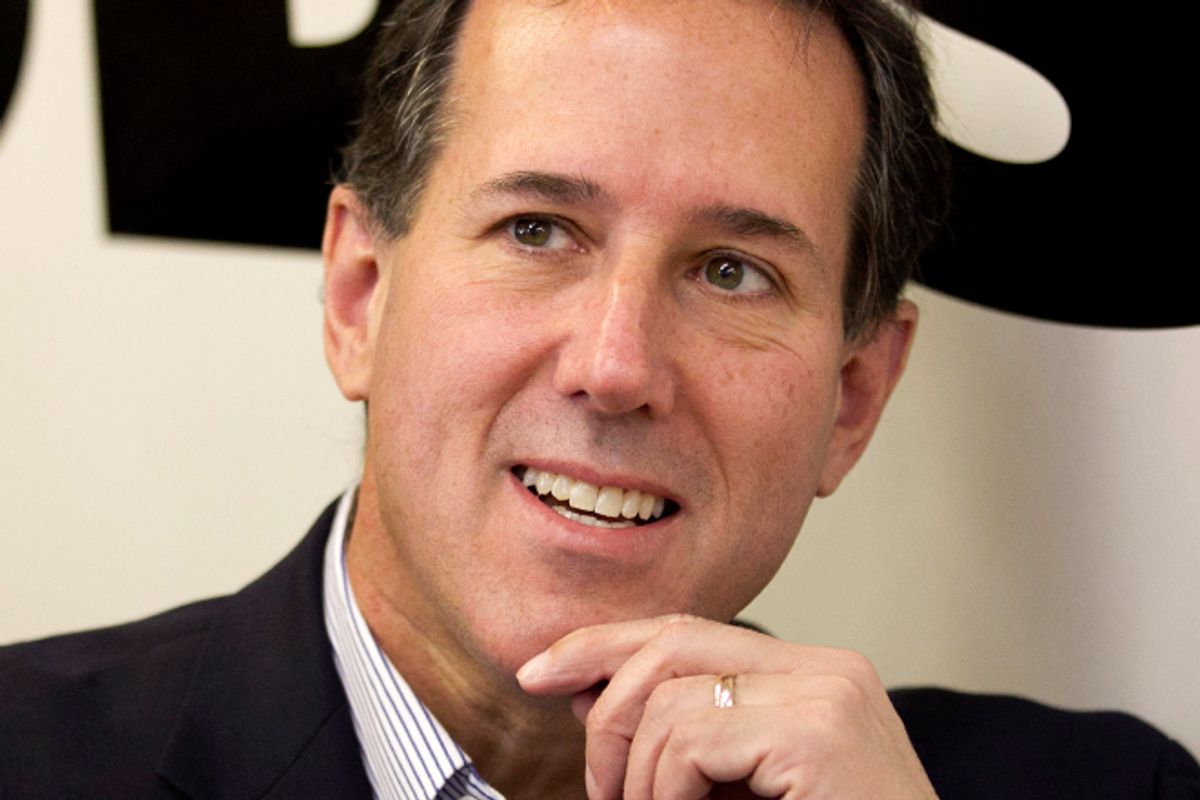 On Monday, failed GOP presidential candidate Rick Santorum declared, “I have a big announcement coming on Friday! Stay tuned!” This prompted anticipation and speculation about what exciting news the sweater-vested pol would roll out, but the news was entirely predictable.  Today, the big reveal, not surprisingly, is that Santorum is starting a new political group.

"What do I call winning 11 states? Just the beginning," Santorum says in a video message on the website of the new group, called Patriot Voices. "Because by staying together you and I can amplify our voices and change America. The top of that list, of course, is defeating Barack Obama and taking back the White House. But it's also critical that we help elect conservatives all across this country and monitor every day to make sure they stick to our conservative principles."

Santorum already has a super PAC, the Foster Friess-backed Red, White, and Blue PAC, which Santorum took over after he dropped out of the presidential race, but now he’s getting a 501(c)4 too. Unlike PACs, these type of groups are considered a charity and do not have to disclose their donors. They can’t directly endorse candidates, but it hardly matters, as they can run candidate-bashing “issue ads” that make their message pretty clear.

What’s unclear is if Patriot Voices will even be running many ads, as Santorum seems to be following the well-worn path of failed conservative candidates who make a big show of announcing these groups, but often do little with them. Little, that is, aside from maintaining their own personal profile and way of life to which they’ve grown accustomed.

But they often fail to deliver.

The pattern is remarkably consistent. A month after pizza mogul Herman Cain dropped out of the presidential race, he teased a “very big announcement” to come. Speculation and excitement followed. “But the hype far outran the actual event,” Yahoo’s Dylan Stableford noted at the time. What he announced was a new group to keep his “999” economic plan alive. "The first solution we're going to promote actively is '999: The Revolution,’” Cain said of his new "Cain's Solutions Revolution” effort.

A big rally in Washington, D.C., would prove the vitality of the 999 revolution and strength of Cain’s new group. But when Cain’s “Army of Davids,” as he dubbed them, descended on the capital to fight the government Goliath, there was barely a platoon. A couple dozen people showed up, and about as many reporters.

In 2010, when Sarah Palin was channeling her national ambitions through her group Sarah PAC, she announced a first flight of candidates she was going to help defeat. “This is just the first salvo in a fight to elect people across the nation who will bring common sense to Washington. Please go to sarahpac.com and join me in the fight,” Palin said on her Facebook page in a fundraising ask. “We’re going to reclaim the power of the people from those who disregarded the will of the people.”

That quarter, her PAC spent only a tiny fraction of its total disbursements on contributions to candidates. Of the $409,000 it spent, less than $10,000 went to campaigns she was backing. She doled out twice and three times as much on numerous individual consultants, and almost as much on de-icing planes. Also included were pricey hotel stays and food. In this cycle, she’s raised over $2 million and spent over $3 million, but has given just $65,000 to helping elect candidates, according to the Center for Responsive politics.

There have been even more spectacular failures, like Christine “I’m a witch” O’Donnell, the former Republican Senate candidate in Delaware. She announced a new political group after her failed bid with promises of big things, only for it to go nearly go broke not long after.

Of course, Santorum could always be an exception, but there are scant examples of politicians being able to successfully turn their failed candidacies into effective movements, so it often feels disingenuous when they promise the sky to their fans. The role of these groups is to keep the candidate’s campaign in suspended animation for a potential future bid, not to change the world, and they should just be honest about that.