Sallie Mae was created to help young people get loans, but it ended up putting profits before their well-being 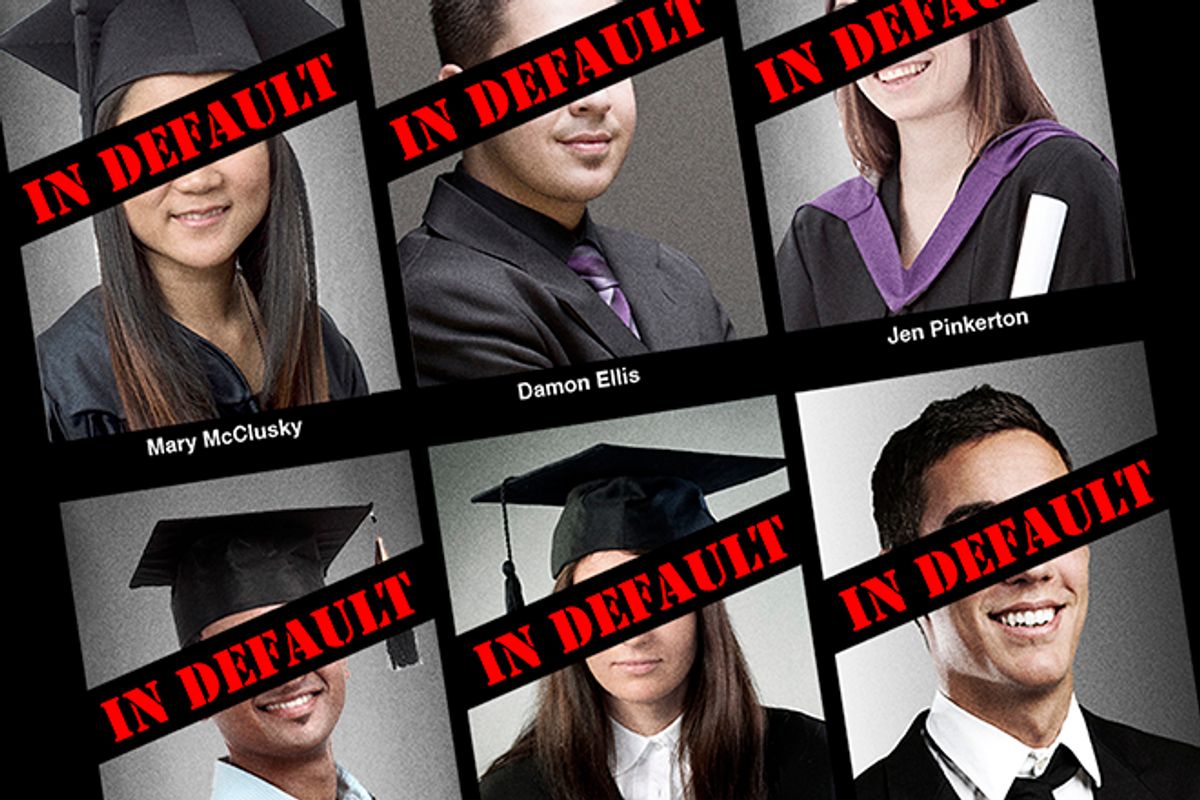 On April 12, a district judge in New York gave his preliminary approval to a settlement agreement in a class action suit filed by investors who claimed that Sallie Mae, the giant student lending company, had violated federal securities laws.

The news attracted relatively little attention from the community of higher education watchers at the time, perhaps because the events at issue took place five years ago, during the crazy days of the housing bust and credit crunch. But the suit merits a close look, because it provides a window into the core issue at the heart of the ballooning student lending crisis: how best to increase access to higher education for those without the means to pay for it. The federal government's efforts to help students pay for college have resulted in the accumulation of a trillion dollars of student loan debt and a constant political struggle over the proper role of the public and private sector. Sallie Mae -- created by the government but now fully private -- is at the heart of the struggle; a deep-pocketed corporation with powerful political connections and its fingers stuck deeply in every part of the student lending pie.

The class action suit claimed that in 2006-2007, as it prepared itself for a lucrative purchase by a consortium of banks and private equity investors, Sallie Mae lowered its lending standards to bolster its portfolio of high-interest-earning "subprime" private student loans. But, when the economy started to crash and default rates spiked, Sallie Mae attempted to hide the damage by changing its loan forbearance policy to punt defaults into the future. In the proposed settlement, the two parties agreed to the creation of a $35 million pool to "resolve investor claims."

That may be good news for the investors and sounds like a relatively cheap price for Sallie Mae to pay to avoid a trial. But the settlement offers nothing to the targets of Sallie Mae's reckless attempt to pump up its profits: the students who were lured into taking out the loans to pay for their education. Private sector loans typically come with much higher interest rates than government-backed loans. It's a toxic mix almost guaranteed to increase economic hardship: low-income students, high-interest loans and stratospheric default rates.

"While the shareholders look like they’re going to make out well, the real victims of Sallie Mae’s apparent scheme -- the low-income and working-class students who should have never been steered to take out these high-cost, risky subprime private loans in the first place -- will not get even a penny of relief from this settlement agreement," said Steven Burd, a specialist in higher education at the New America Foundation. "Sallie Mae will essentially get off scot-free, while many of these borrowers will be stuck with this debt hanging over them for the rest of their lives."

And that's the crucial point. The goal of expanding access to higher education for low-income Americans is something just about everyone agrees on. Republicans and Democrats just differ on how to get there. Republicans would prefer a central role for the private sector, while Democrats believe that student lending is a job most efficiently, and cheaply, carried out by the government. Sallie Mae, a company originally created by the government but now fully privatized, straddles both worlds. The lesson learned from its post-privatization history is a case study in the danger of depending on the "free" market to provide a public good. As the class action settlement implies, the imperative of satisfying shareholder greed doesn't always jibe with what's in the best interest of students.

As part of the Higher Education Act passed by Lyndon Johnson in 1965, the federal government started to provide federal backing for student loans originated by the private sector. Previously the government had given money directly to colleges who then made their own loans, but that policy had the unfortunate side effect of appearing as a government expenditure on the deficit ledger. Guaranteeing loans made by other parties did not get recorded the same way, at least not until borrowers start defaulting and taxpayers are forced to pick up the tab.

In 1972, Nixon created the Student Loan Marketing Association, or "Sallie Mae" -- a government-sponsored enterprise (GSE) empowered by the government to use U.S. Treasury money to buy government-backed student loans from banks, operating under the theory that this would free up cash for the banks to make more loans. In the 1980s, Sallie Mae grew big enough to be able to raise its own capital from financial markets and no longer required Treasury funds. Like its sibling GSEs, Freddie Mac and Fannie Mae, the huge mortgage finance agencies, Sallie Mae was able to raise cash at very low borrowing costs because financial markets assumed that if Sallie Mae ever got into trouble, the government would bail it out. But unlike its colleagues, Sallie Mae ultimately achieved that final step of full privatization, a process that started under the Clinton administration in 1997 and concluded in 2004.

The privatization occurred through a congruence of Republican and Democratic priorities. The Republicans were ideologically pro-privatization, and had always been leery of Sallie Mae's unfair advantage over the private sector. For its part, the Clinton administration wanted to gradually increase the number of student loans that the government made directly to students, without going through banking sector middlemen. Education activists had long argued that the government would save money if it brought the lending in-house.

Those same activists say, however, that Sallie Mae sabotaged the government's new direct lending program through aggressive lobbying, even as it rapidly built up its own portfolio of both government-backed student loans and private loans. As it completed its journey to full privatization, Sallie Mae rapidly became the dominant force in student lending, with net profit approaching $2 billion a year, and a total portfolio of student debt near $100 billion -- which in 2005, represented 45 percent of all federally backed student loans. From 1999-2004, Sallie Mae's top two executives, Al Lord and Tom Fitzpatrick, received compensation worth $225 million and $245 million, respectively.

After 2004, now fully private, Sallie Mae went on an aggressive spending spree, buying up competitors, expanding into the loan servicing, loan guaranteeing and debt collection business; cutting sweetheart deals with for-profit colleges that gave Sallie Mae preferred access to their students; and most important, boosting its portfolio of subprime loans. From June 2006-December 2007, according to the class action suit, Sallie Mae's private loan portfolio doubled from $7 billion to $15.8 billion.

Sallie Mae, say critics, also spearheaded the lobbying effort that managed to make private student loans non-dischargeable in bankruptcy as part of the overhaul of bankruptcy laws in 2005. Private loans also tended to have much higher interest rates than government-backed loans.

According to the class action suit, Sallie Mae's all-out expansion of its private loan portfolio was motivated by a desire to make the company look as good as possible before a buyout led by Bank of America, JPMorgan and the private equity group J.C. Flowers & Co. To justify the proposed price tag of $25 billion (which would have earned Sallie Mae's executives hundreds of millions of dollars), alleges the suit, the more high-interest-earning loans that could be placed on the books, the better.

But then came the housing bust, and, at least according to the class action suit, Sallie Mae realized that its booming portfolio of subprime student loans was a time bomb waiting to explode. To hide the oncoming disaster, alleges the suit, Sallie Mae aggressively pushed students at high risk of default into forbearance -- basically a delaying procedure that pushed technical default into the future, and off the books of Sallie Mae in the short term.

Here's how the judge in the class action suit summarized the allegations in January:

Sallie Mae then moved as many problem loans as possible into forbearance to hide the true number of private loans that were delinquent or in default, in violation of Generally Accepted Accounting Principles and Securities and Exchange Commission regulations, the investors said.

They accuse Sallie Mae's chairman of fudging the numbers to profit on a merger.

But the strategy ultimately failed, a victim of the cascading economic crisis. On Dec. 12, 2007, Sallie Mae announced that the merger had fallen through. Just one week later, the company acknowledged the rapid deterioration of its private loan portfolio.

With a settlement in the works, New America's Steven Burd notes, the general public will likely never know the true extent of what happened at Sallie Mae. But one part of the aftermath is clear. An entire generation of low-income students was pressured to pile up debt that they would never be able to pay back in order to serve the interests of shareholders in a student lender desperate to maximize profits. Debt that, in part because of Sallie Mae's lobbying efforts, can't be discharged in bankruptcy hearings. (Sallie Mae also owns a loan collection agency, so it stands to profit even from defaulted loans.)

Today, Sallie Mae's position in the student loan business isn't quite as strong as it was during the Bush administration. The Obama administration succeeded in ending the practice of guaranteeing loans made by the private sector, and now makes loans directly to students through individual colleges and universities. But Sallie Mae didn't entirely lose out -- it still operates as one of the primary companies entrusted by the federal government with servicing federally backed loans and collecting on defaulted debt. And it has gradually started to build up its private loan business again. Indeed, just this week, Bloomberg News reported a wave of new criticism at the "exploitive" interest rates charged by lenders, including Sallie Mae, on private loans. And you can be absolutely certain that once the political wheel turns again, Sallie Mae's role in the business of funding access to education for its own profit will grow rapidly once again.