How healthcare trapped the GOP

Republicans want to keep the popular parts of Obamacare, but the Supreme Court could make that very difficult 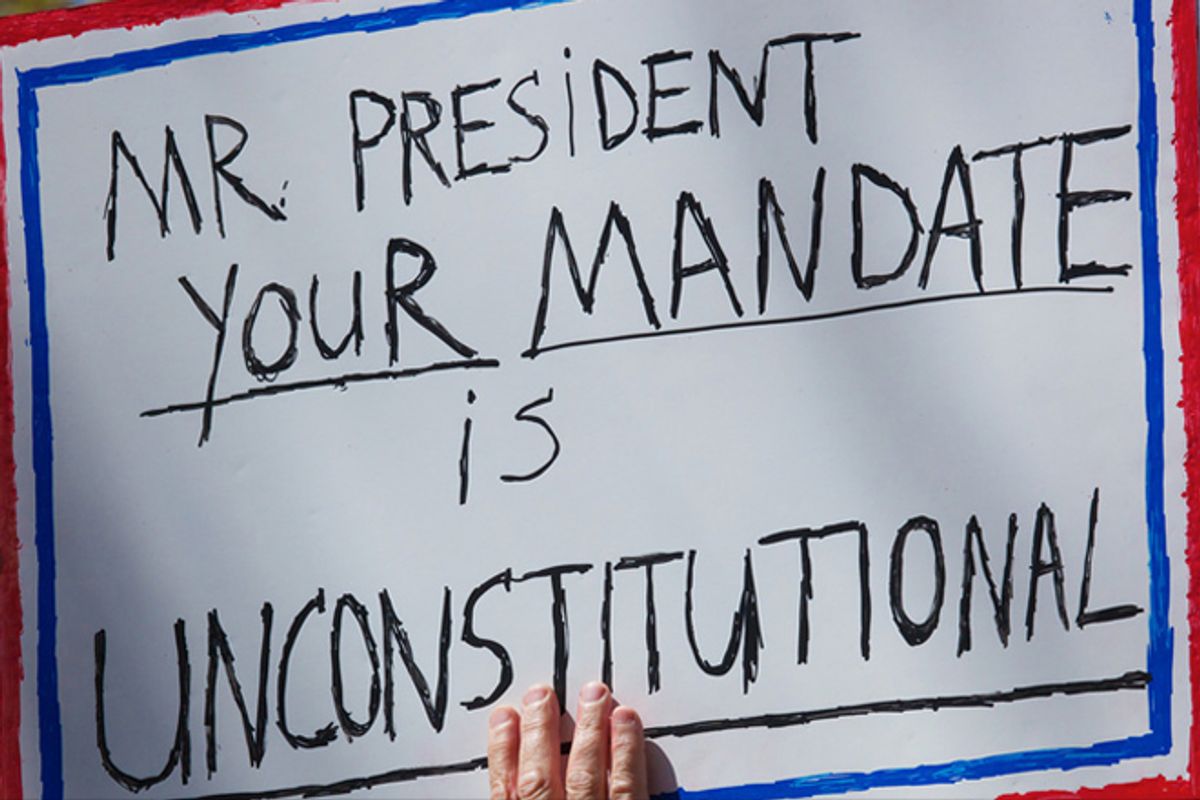 The outlines of the coming Republican healthcare train wreck are becoming ever clearer. Bloomberg News reports today that "6.6 million young adults under age 26 joined their parents’ insurance plans in 2011 because of the U.S. health-care law, the largest one-year increase in medical coverage for the age group."

Is it any surprise that the provision of Obamacare that allows under-26-year-olds to stay on their parents' healthcare insurance plans is hugely popular? Of course not! Indeed, it is so popular that one influential GOP legislator said that no matter what happens when the Supreme Court rules -- later this month! -- on the constitutionality of the individual mandate, he'll work to keep that coverage, along with some other goodies.

The head of a caucus of 21 Republican lawmakers with medical backgrounds said this week that no matter the outcome, he will try to preserve the coverage for young adults and for people with pre-existing medical conditions. Representative Phil Gingrey, an obstetrician-gynecologist from Georgia who co-chairs the group, said the young-adult provision is “a good policy.”

The emphasis is mine. This isn't the first time that Republicans have promised to keep Obamacare's good stuff. Two weeks ago, Alex Seitz-Wald reported similar comments from Sen. Roy Blunt, a Romney advisor. (Romney, by the way, has promised that repealing healthcare reform, in full, will be one of his first orders of business.)

But that raises some questions Republicans find difficult to answer: namely, how do they plan to go about paying for the popular stuff?

Maintaining coverage for under-26-year-olds will be easy, regardless of the Supreme Court's final resolution. Young Americans tend to be healthy, and premiums don’t have to rise much at all to account for their likely medical care costs (less than 1 percent, according to the Obama administration).

But maintaining the prohibition on the ban against insurance companies refusing coverage to people with preexisting conditions is far more difficult. Indeed, that's one of the main justifications for the individual mandate in the first place. By requiring all Americans to have health insurance, the risk pool becomes large enough to account for the sickest Americans, without sending premiums through the roof. The individual mandate makes the system work: a fact that conservatives are well aware of, since they came up with the idea.

The Republican fallback is to rely on subsidized high-risk pools. The sickest Americans are gathered into a group, and the government subsidizes their premiums. Versions of high-risk pools are already in place in many states.

But healthcare experts have long pointed out that subsidized high-risk pools have two big strikes against them -- they cost a lot of money to properly operate, and they still feature much higher premiums than are offered to the general public. In practice, they just don't work very well.

So here's what's going to happen if the Supreme Court strikes down the individual mandate. The primary mechanism that makes the popular parts of healthcare reform work will disappear, and Republicans will be faced with a series of unpalatable choices. They can tell the general public that people with preexisting conditions will no longer be guaranteed coverage, or they can enrage insurance companies by requiring them to continue coverage without a mandate, or they can scramble to find new funding for a scheme that doesn't work very well in practice and will be more expensive than the alternative.