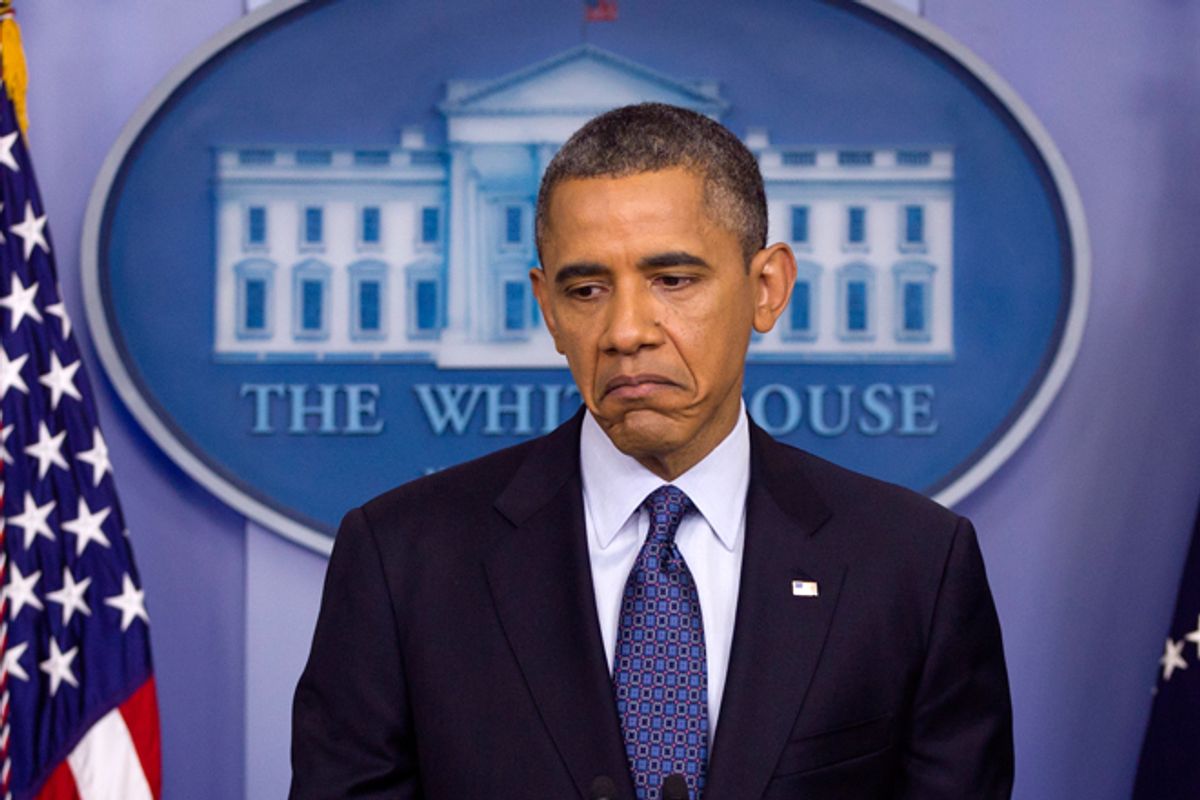 President Obama pauses while talking about the economy at the White House on Friday. (AP/Carolyn Kaster)
--

I’ve been writing that President Obama’s reelection chances depend in large part on voters appreciating context, and the press conference he just concluded illustrated why this is such an iffy proposition.

One of the reasons for the press conference was for Obama to highlight the congressional GOP’s obstruction of the $447 billion jobs bill he proposed last fall. It’s important for Obama to do this because, among other things, his opponent is telling Americans that their president “hasn’t put forth a plan to get us working again” in his entire three-and-a-half years in office. If Obama doesn’t remind people that he absolutely did put forth a plan – a plan that economists agreed would have a measurable effect on growth and employment and that has languished because of unified Republican opposition – they’re apt to just accept what Romney is saying.

In talking about the jobs bill today, Obama focused on a specific component of it that would provide aid to cash-strapped states to help them avoid more public sector layoffs. As Obama explained, this has a lot to do with why the recovery has been so feeble. Since he became president, 636,000 state and local public sector jobs have been eliminated, reductions that have diluted the positive impact of employment gains in the private sector.

Without that public sector shrinkage, the overall employment picture would be less bleak, and hundreds of thousands of Americans who are now out of work and hoarding whatever money they have would instead be participating in the economy.  There’s also the issue of public employees who haven’t been laid off but who look around and fear they’ll be next. How many of them are behaving as if they are already unemployed when it comes to spending their money? This is why Scott Brown, an economist with Raymond James, told ABC News this week that “the government is actually contributing to the slow recovery” and that without the erosion of the public sector, GDP would now be growing at 3 percent, not 2.

Obviously, it would be very helpful for Obama’s reelection prospects if voters grasped this, and also recognized that the aid Obama wants to send to states is being blocked by Republicans. But context and nuance can be very tough to sell, which is why Obama will probably regret an off-the-cuff comment he made while trying to emphasize the magnitude of public sector job losses:

He went on to lay out all of the context mentioned above. But that simple statement – “the private sector’s doing fine” – plays right into the Romney strategy, which depends on economically frustrated swing voters ignoring context and taking out their frustrations on Obama. It’s the kind of line that Romney can weave into stump speeches and ads, juxtaposing it with statistics and anecdotes about pervasive unemployment to create the impression that Obama just doesn’t get the pain that’s out there. Not surprisingly, the Romney campaign was quick to respond to Obama’s press conference by saying, “The 23 million Americans who are out of work are not ‘doing fine.’”

This is as good an illustration as there is of the difference between what Obama and Romney are each selling.