What's really in your steak?

Do you prefer it with a nice Bernaise sauce or maybe some transglutaminase? Yes, "meat glue" 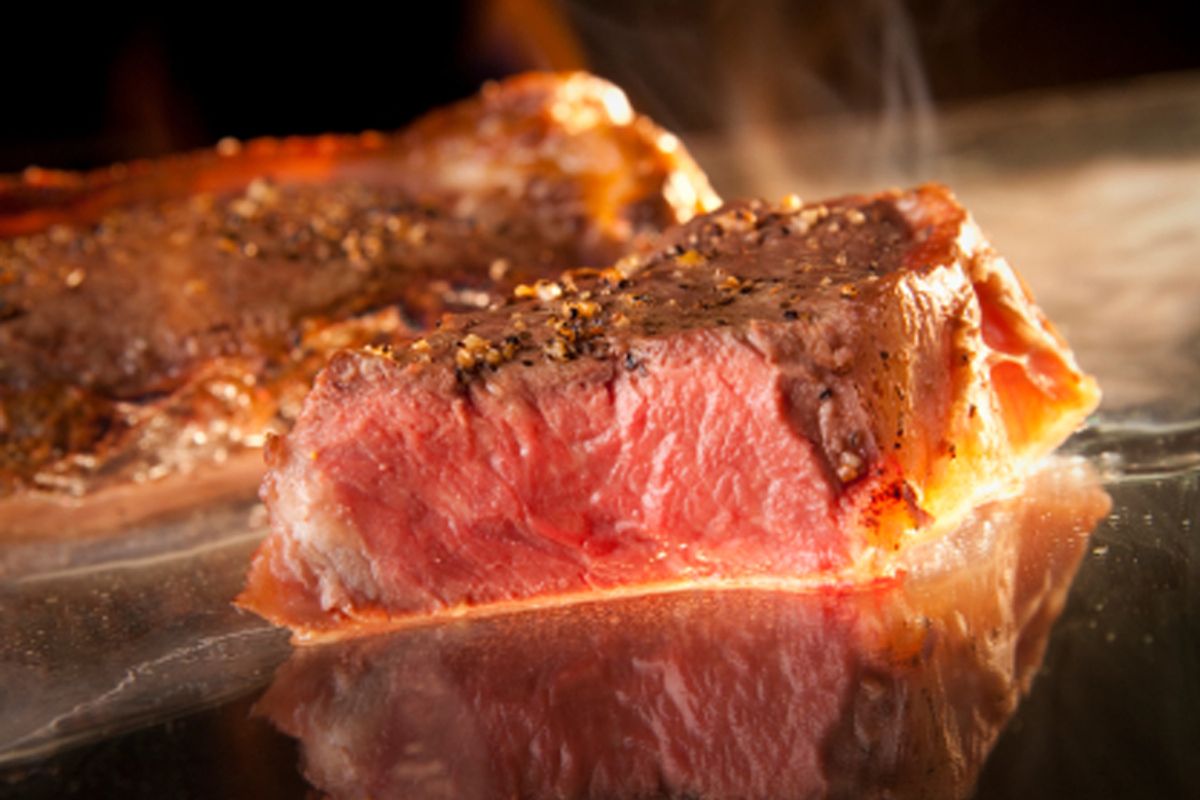 Forget organic, locavore, omega3, umami, artisanal and all the other signposts of the healthy, ethical and refined "good food" movement, there are important advances in CuisineWorld that are going 180 degrees in the opposite direction -- advances that literally are reshaping what we eat (while also reshaping us).

Let's start with red meat. Perhaps you're one who enjoys a steak dinner now and again. If so, let me ask this question: Do you prefer it with a nice Bernaise sauce, a side of garlicky spinach -- or maybe some transglutaminase?

Transglutaminase is an enzyme made by the fermentation of bacteria and added to meat pieces to make them stick together. Yes, "meat glue" -- it's what's for dinner!
This is yet another dandy product from industrialized food purveyors that keep inventing new ways to mess with our dinner for their own fun and profit. Right about now, you're probably asking yourself, "Why do they need to glue meat together?"

Glad you asked. It's so the industry can take cheap chunks of beef and form them into what appears to be a pricey steak.

For example, that filet mignon you ordered at the Slaphappy Steakhouse chain recently -- was it steak ... or transglutaminase? By liberally dusting meat pieces with transglutaminase powder, squishing them into filet mignon-shaped molds, adding a bit of pressure to bond the pieces and chilling them -- voila, four-bucks-a-pound stew meat looks like a $25-a-pound filet mignon!

While glued-together, steak-like meat is surprisingly common in the food service industry, the corporations peddling it are not eager to let us consumers in on their little secret.

Well, sniffs the meat industry's lobbying group, it's not like the companies are deceiving eaters -- those that use the process have to list transglutaminase on the ingredient label and stamp the package as "formed" or "reformed" meat. How honest! Except that most of these molded "filet mignon" are sold through high-volume chain restaurants, hotels, cafeterias and banquet halls -- where unwitting customers never see the package or ingredient label.

This is why we should support truth-in-menu laws. Make them say "reformed and glued" filet mignon right on the menu. That simple step lets us decide if we really want to eat the stuff. Consumers should have the right to know ... and choose.

Next on the menu: extra fat! While many cafes, bistros and even diners these days have moved to such healthy edibles as locally sourced beets and jicama on sustainably raised arugula dressed with small-batch artisan balsamic vinegar, Pizza Hut is proudly going for the hardy eater, shouting, "Let's get stuffed."

The chain has enhanced its belt-busting pepperoni and gooey cheese pizza by (get this) stuffing a long, looping hot dog right into the crust! But, if that's not caloric enough for you, Pizza Hut has also designed a pizza that is ringed by a dozen mini cheeseburgers baked directly onto the crust.

Hey, some might see obesity as a crisis, but YUM! Brands Inc., the conglomerate that owns Pizza Hut, sees it as a moneymaking opportunity. Don't fight it, feed it!
Not to be outdone, the Burger King chain is test-marketing a stunning advance in fusion cuisine at one of its Nashville outlets. It marries two essential food groups together: ice cream and pork. Yes, America, get ready for the Bacon Sundae! Topped off with caramel and chocolate syrup.

The pioneering innovator in obesity grub, however, comes from the city where anything goes and "too much" is never enough: Las Vegas. Many top chefs have opened four-star restaurants along the Las Vegas strip, but none can outstrip a local diner when it comes to extravagant excess. Unabashedly named the "Heart Attack Grill," this place takes pride in deep-fried, and its menu is filled with unhealthy eats. Renown for its Quadruple Bypass Burger, Butter Fat Shakes and Flatliner Fries cooked in pure lard, the grill brags that it serves food with "Taste Worth Dying For."

Indeed, two diners have collapsed so far this year while pounding down Bypass Burgers. To add to the charm, the grill offers a special deal for truly hefty eaters: If you weigh over 350 pounds, you can eat for free. So weigh in, tuck in -- and bon appetite.

Jim Hightower is a national radio commentator, writer, public speaker, and author of the new book, "Swim Against the Current: Even a Dead Fish Can Go With the Flow." (Wiley, March 2008) He publishes the monthly "Hightower Lowdown," co-edited by Phillip Frazer.