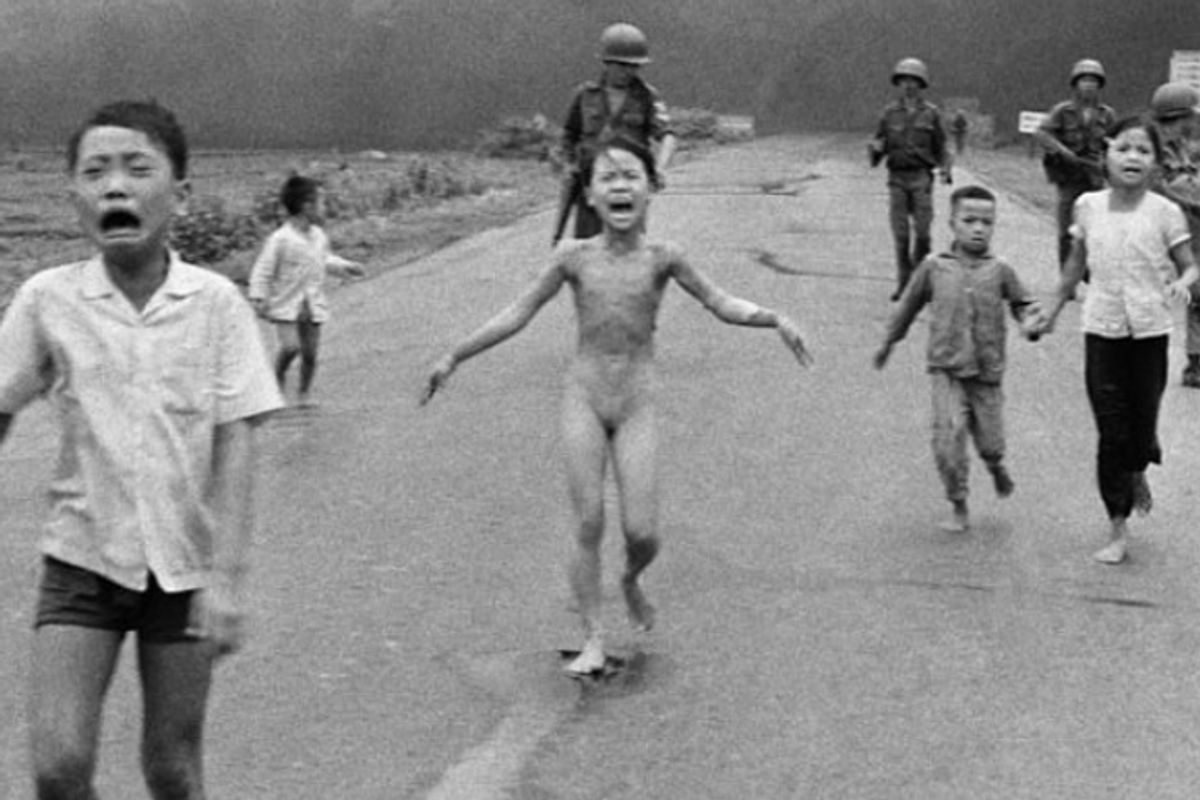 “Too hot! Too hot!” wailed 9-year-old Kim Phuc as sticky napalm burned through her clothes and skin. Forty years ago this week, Kim Phuc was photographed running down the road away from her burning village after a South Vietnamese plane dropped incendiary weapons.

The photograph, taken by Huynh Cong “Nick” Ut for Associated Press on June 8, 1972, became emblematic of the terrible impact on civilians of the U.S.-led bombing campaigns over Southeast Asia.

In the decade that followed, the shocking consequences that napalm inflicted on civilians in Vietnam and elsewhere became a major factor motivating adoption of a new international law restricting the use of some incendiary weapons. But that law, Protocol III to the Convention on Conventional Weapons (CCW), has failed to live up to its promise.

Today, children continue to endure the devastating impacts of incendiary weapons. It is time for governments to revisit CCW Protocol III and strengthen existing law to minimize that suffering.

Napalm is the most notorious incendiary substance, but it is only one of more than 180. The harm caused by white phosphorus munitions, used in more recent conflicts, exemplifies these weapons’ humanitarian problems.

The Associated Press reported that an 8-year-old Afghan girl, Razia, was injured when a white phosphorus shell ripped through her home in the Tagab Valley of Kapisa province in June 2009. When she reached the operating room, white powder covered her skin, the oxygen mask on her face started to melt, and flames appeared when doctors attempted to scrape away the dead tissue.

White phosphorus munitions cause particularly severe injuries, including chemical burns down to the bone. Wounds contaminated by white phosphorus can reignite days later when bandages are removed, produce poisoning that leads to organ failure and death, and lead to lifetime health problems.

White phosphorus munitions are not banned. They are generally designed to be used by militaries as smokescreens to obscure their operations on the ground and to illuminate and mark targets at night. Yet in Afghanistan and elsewhere, actors ranging from high-tech military powers to non-state armed groups are using white phosphorus as an incendiary weapon to ignite fuel supplies, ammunition and other materiel.

The New York Times has documented that, as recently as October 2011, U.S. and other international forces in Afghanistan were using white phosphorus rounds against Taliban rocket positions. A U.S. military spokesperson said at the time that officials could not be certain whether it was their own round or an enemy round that hit Razia’s house.

In another recent conflict, the Israel Defense Forces used white phosphorus in densely populated areas of Gaza in 2009, killing and injuring civilians and damaging infrastructure, including a United Nations school where civilians were taking shelter. Local doctors and witnesses described to Human Rights Watch researchers injuries that burned civilians to the bone and reignited during surgery.

Stockpiling these weapons is also a cause for concern. Across Libya in 2011, weapons depots containing white phosphorus and napalm were left unsecured, endangering civilians. In Benghazi, Human Rights Watch found leaking drums of napalm powder abandoned at a military depot alongside casings and igniters for napalm bombs. It found white phosphorus and mortar shells at multiple sites as recently as March 2012.

Efforts are under way to secure Libya’s abandoned ordnance. But there hasn’t been diplomatic enthusiasm to tackle the broader problem – the loopholes and inconsistent restrictions that limit CCW Protocol III’s effectiveness.

In addition, the protocol prohibits attacks in populated areas with air-dropped incendiary weapons yet permits the same kinds of attacks with ground-launched models under certain circumstances. At the least, countries should bolster the protocol’s restrictions by prohibiting the use of all incendiary weapons in civilian areas.

A complete ban on incendiary weapons would have the most humanitarian benefits and provide the strongest protection under international law.

Over the past two years, at least 20 countries that have ratified the convention have expressed concern about incendiary weapons including white phosphorus, and many have said they are willing to reexamine the protocol.

In November, diplomats will convene in Geneva for their annual review of the convention. They should discuss the incendiary weapons protocol’s humanitarian shortcomings and make a commitment to revisit and strengthen it. They owe it to Kim Phuc, Razia and other victims of these exceptionally cruel weapons.