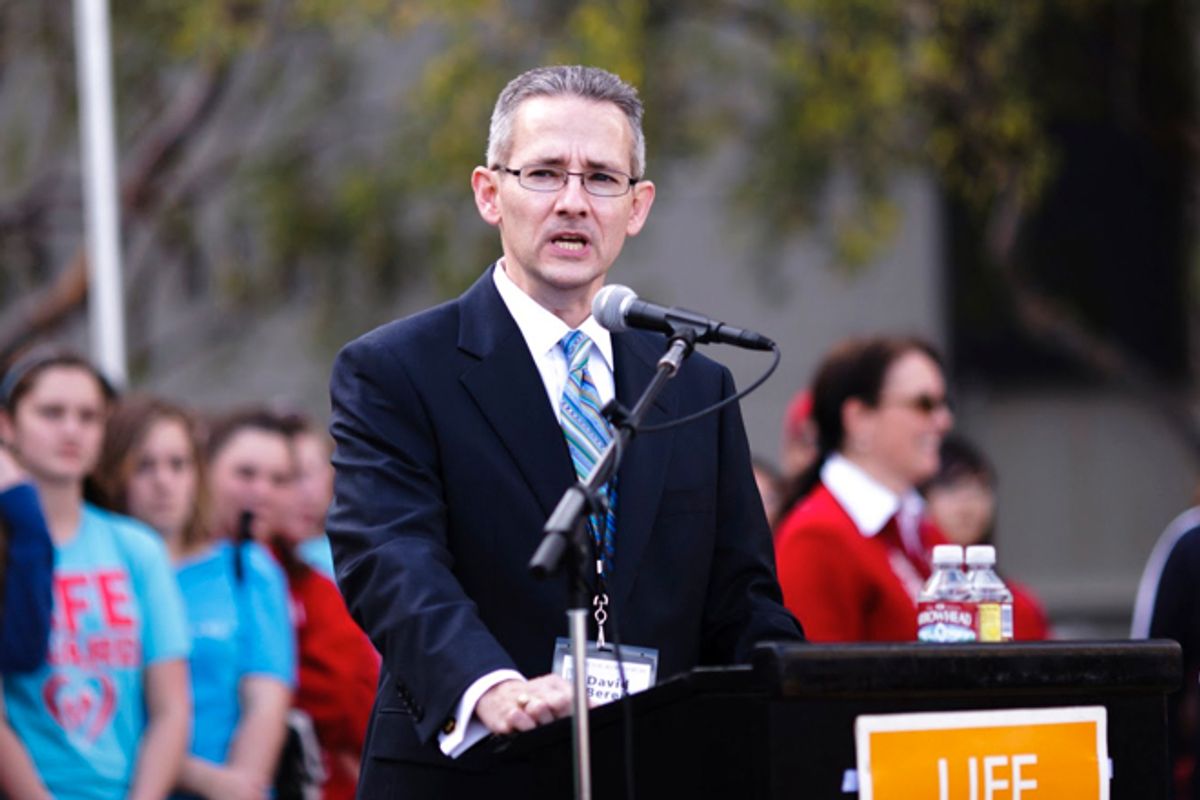 Waiting for the Stand Up for Religious Freedom rally on Capitol Hill to begin on Friday, David Bereit, founder of the anti-abortion group 40 Days for Life, explained to me, with the patience of a dedicated crusader accustomed to repeating talking points, why he is “proud to be standing” with the coalition of groups who are protesting, relentlessly, that the contraception coverage requirement under the Affordable Care Act infringes on their religious freedom. But while Bereit, who is not Catholic, said he is “opposed to the government mandating contraception coverage,” he would not give me a straight answer on whether he is opposed to contraception.

As the "religious freedom" wars have heated up over the United States Department of Health and Human Services's contraception mandate, and as non-Catholic groups have taken up the mantle of the Catholic Church's opposition to abortion, there has been a blurring of lines between activists whose primary objection is to end abortion and those who are also opposed to contraception. Under the "religious freedom" banner, and in particular the Stand Up for Religious Freedom rallies, are a wide array of organizations that include those once considered fringe, such as Bereit's former employer, the anti-contraception American Life League, and Operation Rescue.

Before Lila Rose started making her deceptive guerrilla videos at Planned Parenthood clinics, before the U.S. Conference of Catholic Bishops started investigating the Girl Scouts, before it became essential for any God- (and base-) fearing Republican to call for defunding Planned Parenthood, David Bereit was at the forefront of the spiritual — and political — warfare against what he has called Planned Parenthood’s “abortion empire.” His 40 Days for Life organization organizes local activists to protest outside of Planned Parenthood and other medical clinics. In talking with me, he accused Planned Parenthood of “systematically destroying innocent lives through abortion” and through “many of its other projects and programs,” of “devaluing human life, and of leading people into lifestyles where they will later feel the need for abortion.”

Bereit cut his teeth as an anti-abortion activist in Brazos County, Texas, a state that has become, particularly under Gov. Rick Perry, a hotbed for spiritual warriors who believe they are carrying out God’s calling to fell the mighty Planned Parenthood. A federal court’s injunction of the state’s latest effort to bar Planned Parenthood from receiving federally subsidized funding under the state’s Women’s Health Program is currently on appeal.

In 2002, as head of the Brazos County Coalition for Life, Bereit, a former pharmaceutical salesman, developed a list of local companies targeted for a boycott over their donations of goods and services to a fundraiser for the local Planned Parenthood. The clinic was the community’s only abortion provider and one of only a few facilities where low-income women could obtain healthcare. Local business owners called the boycott "a threat” and “blackmail.” In Houston, activists made similar efforts to boycott local contractors who worked on a new facility that opened in 2010, which has been continually protested by anti-abortion forces as the “largest abortion facility in the Western hemisphere.”

Following his successes with the Coalition for Life in Brazos County, in 2004 Bereit launched the first local 40 Days for Life campaign — 40 days being a biblical number — of “prayer and fasting” outside medical clinics, or “abortion mills” as activists call them.

A year after launching 40 Days for Life, Bereit joined the American Life League, long considered one of the fringe players in the anti-abortion movement, serving as national director of its project STOPP, or Stop Planned Parenthood.

Shortly after joining STOPP, Bereit blamed the Supreme Court decision in Griswold v. Connecticut, which ruled state bans on contraception unconstitutional, for “a tragic moral breakdown in our culture,” adding, “It is time for Americans to take a long, hard look at the real legacy of the Griswold decision. Although we can't undo the consequences overnight, we can begin to take back our society one step at a time. The first step is to put an end to the destructive influence of Planned Parenthood, the organization that forced this tragedy upon our nation 40 years ago.”

At the Stand Up for Religious Freedom rally, Bereit told me he opposed the legal precedent that Griswold set, as it laid the groundwork for Roe v. Wade. But when I pressed him about whether he agreed with ALL’s opposition to contraception generally, he paused and said, “I still agree with the position that anything that directly causes the destruction of human life, and there is evidence suggesting that certain birth control devices can have an abortifacient property. I do have opposition to those things,” which he said included birth control pills. He, like other speakers at the rally, repeated the false charge that the emergency contraceptives ella and Plan B, which are covered by the HHS rule, are abortifacients.

In an online discussion titled “Ending Abortion,” Bereit interviewed Jim Sedlak, his former colleague and the current executive director of STOPP, calling him “the most credible expert I have ever heard on the topic of Planned Parenthood.” STOPP’s petition web page to end federal funding of Planned Parenthood charges, among other things, that Planned Parenthood’s “top goal for the next 14 years is to push its agenda of promiscuous sex everywhere in our society,” and that it pushes pornography to children, covers up for rapists and child predators, and is “openly hostile to Christianity.”

In a 2006 white paper, the pro-choice group Catholics for Choice described the American Life League as being “on the right wing of the antichoice movement, marginalized and isolated even among ostensible allies.” But the very aims of ALL — opposition to legal abortion without any exceptions, the creation of legal rights for fertilized eggs, and elimination of access to birth control — seem to have crept into the mainstream of anti-abortion activism in the six years since the publication of that report. ALL had a presence at the religious freedom rally, with supporters sporting its green “The Pill Kills” t-shirts. Former Rep. Bob Dornan, a long-time ALL ally, addressed the crowd. He called HHS Secretary Kathleen Sebelius and House Minority Leader Nancy Pelosi “Judas Catholics” and approvingly quoted Cardinal James Francis Stafford, head of the Apostolic Penitentiary of the Holy See, who in 2008 called President Obama “aggressive, disruptive, and apocalyptic.”

STOPP’s 1995 essay, “Why We Oppose Planned Parenthood,” still widely reprinted on anti-abortion websites today, claimed that Planned Parenthood is a “cold, calculating group intent on spreading the Humanist religion, luring our children into their web of premarital sex and unlimited abortions, reducing the population of minorities in particular and filling its coffers with the profits from sales of birth control devices.” The document accused Planned Parenthood of being a “population control group” and complained that it “receives large amounts of government monies to spread its philosophies. PPFA receives $150 million from American taxpayers. Thus, we are being forced to pay for its outrageous programs and its attacks on our youth.” ALL currently is promoting its new campaign to take “Jesus to Planned Parenthood through Mary,” through which the group claims to call on Mary to use her “extraordinary gifts from God” to “put an end to the reign of terror that is Planned Parenthood.”

Bereit rejects the possibility that Christians could hold views contrary to his own. After Gene Robinson, the first openly gay bishop in the Episcopal Church, addressed a 2005 prayer breakfast sponsored by Planned Parenthood, Bereit vowed STOPP was “not going to allow Planned Parenthood to hijack Christianity” and that it would lobby lawmakers to defund it. In response to a different Planned Parenthood prayer effort this year, led by Clergy for Choice, Bereit said, “Planned Parenthood has stooped to a new low by exploiting pastors and churches to ‘celebrate’ the slaughter of babies made in God’s image and likeness.”

Bereit’s framing of his anti-abortion and anti-contraception crusades as spiritual warfare — he once told a gathering of anti-abortion activists of how a 40 Days for Life campaign in Michigan cast demons out of an abortion clinic — are shared by Republican politicians. In Texas, Rick Perry has used spiritual warfare language when speaking at anti-abortion events. Rep. Chris Smith (R-N.J.), chair of the Congressional Pro-Life Caucus, calls 40 Days for Life “without a doubt, the tool, the means to the end. We can make all the speeches, offer all the amendments and pieces of legislation imaginable, but without the profound undergirding of prayer and fasting that 40 Days for Life brings to focus on this, this heinous evil, the abortion culture, the culture of death, without prayer and fasting, absolutely nothing will move forward.” Smith credited “prayer and fasting” with fighting “ terrible demonic forces.”

Americans United for Life, the anti-abortion group that is part of the Stand for Religious Freedom coalition and which drafted much of the model legislation states have used to restrict access to abortion, recently gave Smith its Henry J. Hyde Defender of Life Award, citing his “unrelenting and unflagging” efforts to “reduce abortion and expose its evils.”

One of 40 Days for Life’s greatest victories, and a testament to its ground zero in Brazos County, Texas, was the “conversion” of former Planned Parenthood employee Abby Johnson, who worked at the clinic there. Now a coveted speaker at anti-abortion events, Johnson gives her testimony claiming to have “watched in horror as a 13-week baby fought, and ultimately lost, its life at the hand of the abortionist.” She credits the 40 Days for Life activists’ presence outside the Planned Parenthood clinic where she worked with changing her mind about abortion.

Portraying Planned Parenthood as an evil Goliath that is murdering babies, driving the country into moral ruin and robbing the government coffers is a prevailing theme in Bereit’s activism. During the debate on health care reform in 2009 and 2010, he played a key role in webcasts hosted by the Stop the Abortion Mandate coalition, which mobilized voters against the health care bill by falsely claiming the legislation constituted the "largest expansion of abortion since Roe v. Wade.” The coalition, which included dozens of anti-abortion and religious right organizations, pushed for passage of the Stupak amendment in 2009. When the Senate was considering a less restrictive version of Stupak (which ended up in the final version), Bereit wrote in an “urgent prayer alert” that “this proposed legislation could undo all the years of work that have gone into the fight to defeat the abortion culture. The fate of millions of preborn babies hangs in the balance,” and he claimed, without basis, that “Planned Parenthood and the rest of the abortion industry would get a massive, GOVERNMENT-FUNDED BAILOUT” (emphasis in original).

There once was a time when one could distinguish between a group like ALL — which unabashedly opposes contraception — and a group like AUL, which claims to just oppose federal funding for Planned Parenthood. Under the guise of religious freedom, they’re all in it together now, with the support of Republicans like Reps. Michele Bachmann, Steve King, Trent Franks and Alan Nunnelee, all of whom addressed today’s [Friday’s] rally. “Religious freedom” isn’t just the new rallying cry against the contraception mandate. It’s the mantra of a sprawling coalition of crusaders who believe they are on a mission from God to not just end abortion but to make accessing contraception difficult if not impossible for millions of American women.