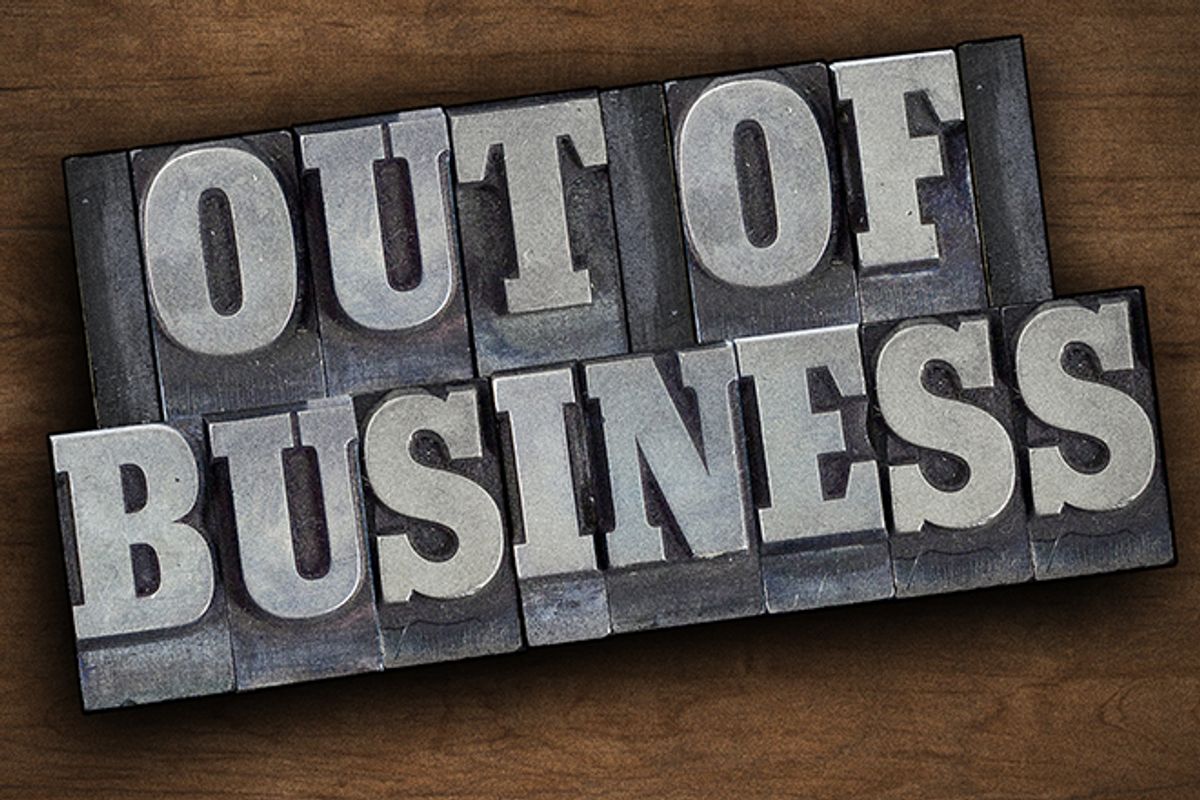 There might not be a direct link between the divisive mess that politics has become in Wisconsin -- where Scott Walker won the right to remain governor despite governing well to the right of where Republicans have traditionally governed in that state -- and the death of the great American newspaper, but both represent national trends that have so far disproportionately rocked the middle of the country, mainly for the worse.

Newspapers, nationally, are actually doing even worse than you probably think they are. Jack Shafer wrote a great, depressing column last week on the ongoing liquidation of the industry: The owners are extracting what value remains and preparing to get out of the increasingly unprofitable business entirely. Your local paper is almost certainly smaller (in every sense) than it was 10 years ago (even if your local paper is the Times or the Wall Street Journal!), and it's almost certainly more expensive:

Almost everywhere you look across the newspaper landscape, page count is down. Coverage areas have contracted, and newsroom staffs have shrunk dramatically. Over the past decade, newspapers have deleted features readers long took for granted, such as reporting from their own foreign, Washington and state bureaus. Last month, the Los Angeles Times folded its Sunday magazine, further winnowing the number of newspapers publishing a Sunday glossy. Newspapers have dumped free-standing book review sections, abandoned late-breaking news to websites, given up on providing comprehensive stock listings, winnowed comics pages, cut editorial cartoonists from their staff, and reduced the number of community listings and announcements.

This decline is actually the acceleration of a very, very long-term trend: Newspaper circulation per household peaked in the 1930s and 1940s (when many households received two a day!) and dropped steadily thereafter, basically tracking the rise of television. The afternoon paper was the first casualty. Shafer names one scholar who ascribes the collapse in part to the industry's failure to attract the baby boomers. It's true that home delivery of newspapers (an increasingly expensive luxury) is basically now something only old people who've always gotten the paper still do.

Meanwhile, another long-term trend is also reaching its zenith: Party polarization is indeed much greater now than it used to be. And while the parties are polarized, the Republican Party became much more conservative than it used to be. Professional moderates, who occupy a privileged position in our traditional press, will vigorously agree to that first statement, but the majority of them (with a couple of prominent exceptions) are unable to accept the second.

The polarization of the parties and radicalization of the GOP were both arguably inevitable results of our weird governing system and various long-term demographic trends. But the combination of a more right-wing conservative party and a dead newspaper culture has wreaked havoc on the local politics of Middle America.

One role the postwar, professional, "objective" daily newspaper played was to referee the political fights, to decide, through coverage decisions or omission or outright editorializing, which positions were mainstream and which weren't. The newspapers were a decidedly imperfect means of fixing the "acceptable" terms of the public debate -- which is why leftists were constantly annoyed with them and right-wingers despised them -- but they did actually help to engender a sort of grand national moderate compromise that worked well enough (for certain classes of people and not, say, dead Vietnamese children) for long enough that lots of those aforementioned professional moderates understandably miss it. But in a newspaperless society, it turns out, it is quite easy for politicians and parties to get away with a lot. Not just outright corruption, not secretive backroom deals, but actual public legislative actions that would have seemed outrageous a generation ago.

There's a flood of ALEC-drafted bullshit streaming into Republican-controlled state legislatures daily, and nationally, for the most part, we only ever hear about the worst bills after they've passed. I am not talking about big, famous bills on hot-button issues, like Arizona's "harass the immigrants" bill, but random, penny-ante bits of cronyism and corporate welfare that happen because the people passing them know they can get away with it. Like telecom "deregulation" and most of the other items listed here. And then, things like Michigan's bizarre and undemocratic emergency manager law are passed -- and, because they're law (supported by one of our two major parties), they're the status quo, and quite difficult to get rid of.

The Detroit Free Press is a great newspaper. Someone who reads that paper daily has a good grasp on what's actually happening, politically, in Detroit and Lansing. But it reaches like 1/20th of the Detroit metro area daily. (And the papers serving the rest of Michigan have largely disappeared or shrunk.) The Milwaukee Journal Sentinel is still a great newspaper. A couple hundred thousand of Wisconsin's 5.7 million residents read it.

I suspect a lot of voters across the country, but especially in places like Michigan, Wisconsin and Minnesota, still think they're voting for the old Republican Parties of those states, where George Romneys and Arne Carlsons and even Tommy Thompsons thrived. I suspect that the political education they're receiving on local stories from their TV news is brainless and unhelpful and that their online consumption of news follows the same patterns as everyone else's online news consumption: largely the sort of material that newspapers used to put after the world, nation, state and metro sections. (Not that this proves causality, but: New York, a great newspaper state even with the New York Post in the picture, still has an exceedingly moderate Republican Party. Minnesota, a state arguably just as liberal as New York, but with two anemic major dailies struggling to survive, has a crazy far-right Republican Party. The Los Angeles Times is a depressing nightmare, just like the entire California state government.)

National politics will survive the death of newspapers basically intact. Dysfunctional as hell but intact. The Times and the Post still essentially dictate the mainstream. The Times' circulation is lousy, but its traffic is great. People are actually reasonably well-informed regarding what is going on in Washington. They should be: Washington is full of hundreds of reporters all covering the same things. There are far fewer reporters than there used to be, though, in Jefferson City. As a result, I think it's entirely possible that the generations now ascendant will be, by and large, reasonably well-versed on national politics and totally, horribly ignorant of local affairs. Young people may have a better sense of what's going on in Syria than in their state capital, let alone their city hall. If everyone in the country is reading the New York Times online, no one is keeping up with what's happening in Lansing and Madison. (This happens, to a degree, even in a place like New York, with four high-circulation daily newspapers of varying but generally respectable quality. I know too many longtime residents who keep up with politics but display little interest in who represents them in our disreputable and dysfunctional state Legislature.)

This wouldn't be a problem, for society at large, if there were a commonly available substitute for what the good old middle-tier city dailies did, but there really isn't. There is local TV news, which is, practically without exception, useless -- a police blotter combined with a weather report -- and there is radio -- nowadays more likely than not nationally produced material, whether it's 'quality' public radio or canned morning zoo talk -- and the Internet, which is full of wonderful news sources and sparkling commentary and very little city hall reporting. And what city hall reporting there is (and there is some, and some of it is very good) is not directly, physically connected to the place where you also get your sports news and your comics and your crossword puzzle -- it's off on some other site entirely that you have to know about and specifically want to visit in order to read it.

People self-selecting news sources are still searching out good and important journalism, but without the sort of forced topical juxtaposition of a physical paper covering a community and the world, it's easy to skip past the "unsexy" local news in favor of whatever stupid thing Michele Bachmann said today, can you believe it! What is likely needed to save newspapers is dedicated billionaires -- future Hearsts, Rupert Murdochs and even Mort Zuckermans -- willing to lose money. Google could probably re-create some of what made newspapers a particularly useful civic tool, without saving the papers themselves. But I'm not hugely optimistic, in the short term, that anyone will notice the people who are, indeed, trying very hard to shine a light on the actions of craven political actors locally as opposed to in Washington.