Mitt Romney has a long history of attacking firefighters and their unions, going back to his days in Massachusetts 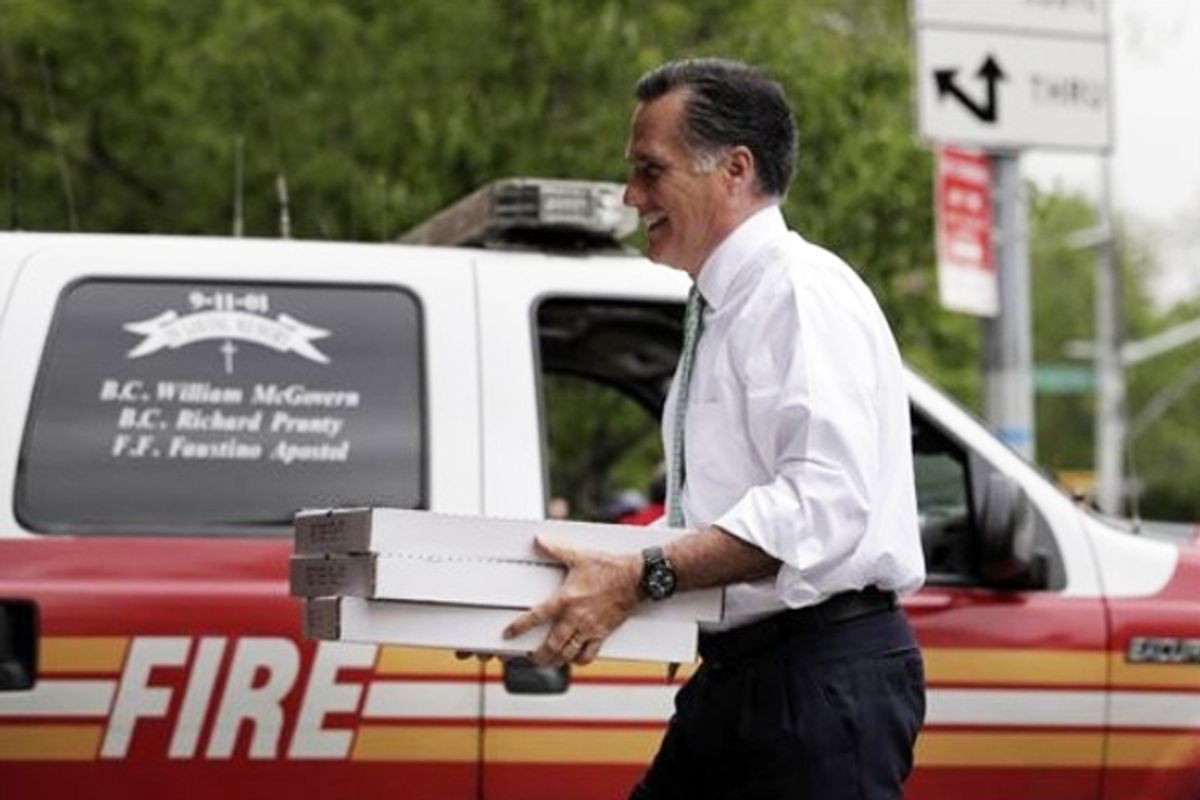 Mitt Romney carries boxes of pizza for firefighters at Engine 24, Ladder 5 in New York on May 1. (AP/Jae C. Hong)
--

Mitt Romney came under fire this weekend from Democrats after he suggested that we shouldn’t hire more firefighters. Then top Romney surrogate John Sununu, the former governor of New Hampshire, doubled down on Romney’s firefighter comments today, telling MSNBC they were not a “gaffe.” This is hardly the first time the presumed GOP nominee has tangled with firefighters.

In fact, he has a long, bitter history with them. As governor of Massachusetts, Romney often ended up sparring with firefighters and their unions. He proposed stripping collective bargaining rights for firefighters and police officers in a city that needed a state bailout, and cut funding to a fire station to be built on the site where six firemen died. He also proposed tripling the state police budget to deal with homeland security concerns in the years after 9/11, but didn’t offer a dime for firefighters, angering many at the time.

In 2004, when the city of Springfield was facing bankruptcy, Romney proposed a $52 million bailout package that included suspending collective bargaining and civil service benefits for the city's unions, including public safety officers. "He hates us," Robert McCarthy, the president of the Professional Fire Fighters of Massachusetts, told the Associated Press at the time. "Unions are what made this state what it is,” he said, but Romney “won't even talk to us." Romney spokesperson Nicole St. Peter defended the suspension of union benefits, telling the AP that the "control board” the governor appointed to oversee the city’s finances “needs maximum flexibility to restore Springfield's financial footing.” The Democratic-controlled state Legislature eventually overrode Romney and preserved the bargaining rights, though the control board remained controversial in the city.

It’s worth noting that stripping the union rights of firefighters was further than Wisconsin Gov. Walker was willing to go; he exempted public safety workers from his reforms. But when Walker’s fellow Republican Gov. John Kasich of Ohio went after police and firefighters’ union rights, he was rebuffed by voters in a referendum last year.

In Massachusetts, Romney also cut state funding for a new fire station to be built in Worcester on the site of a notorious building fire that killed six local firefighters in 1999. The state had earmarked $2 million for the project, but Romney cut it, saying the local governments, and not the state, should pay for such projects. Eventually, the governor agreed to $1 million of funds, but only after a local uproar.

Frank Raffa, president of local firefighters union, “said local firefighters were insulted by the governor's action,” the Worcester Telegram & Gazette reported in September of 2004. Worcester Mayor Timothy Murray said Romney showed "a lack of understanding" about how the community was affected by the deaths of the firefighters at Worcester Cold Storage and Warehouse Co. building several years earlier. "This is the final resting site of our heroes," said state Rep. Vincent Pedone, a Democrat from Worcester. "This site cannot be a drive-through McDonald's."

Before that, Romney proposed increasing the size of the state police’s homeland security budget from $850,000 to $2.7 million. But it gave nothing to firefighters, port security or other agencies involved in efforts to respond to disasters. Lexington Fire Lt. Ken Donnelly, then the secretary-treasurer of the state firefighters’ union, told the AP in January of 2004 that it was "outrageous" that fire services were being "ignored." He noted that firefighters were critical in responding to terror attacks and the post-9/11 anthrax scares.

Harold Schaitberger, the president of the International Association of Firefighters, which represents about 300,000 firefighters, told Salon that Romney’s comment Friday was not unexpected. “It doesn’t surprise us at all. It’s very consistent with our experience with him and his view about our responsibility to keep our communities safe. His actions as governor, as candidate for president, have made it clear that he’s willing to jeopardize the safety of our communities,” he said.

Schaitberger said Romney, as governor, also line-item vetoed budget items to provide firefighting gear, including protective clothing, radios and infrared devices to search for victims in smoke. In March, Schaitberger’s group produced an ad attacking Romney for opposing a federal program created by President Obama to provide local communities with funds to hire back firefighters laid off during the recession.

McCarthy, the state union president who fought Romney in the Springfield row, drew a historical comparison to another former Massachusetts governor. “This is the first time since Calvin Coolidge that a relationship this bad has existed between the governor and the unions,” he told the AP in 2004. Coolidge used state troops to crush unions in 1919 when the police were on strike. An anti-union Republican with national ambitions, Coolidge later became president. Indeed, McCarthy’s comparison may prove prescient.