What it takes to be in Vogue

Anna Wintour says Asma al-Assad is "completely at odds" with the magazine's priorities. But is she really? 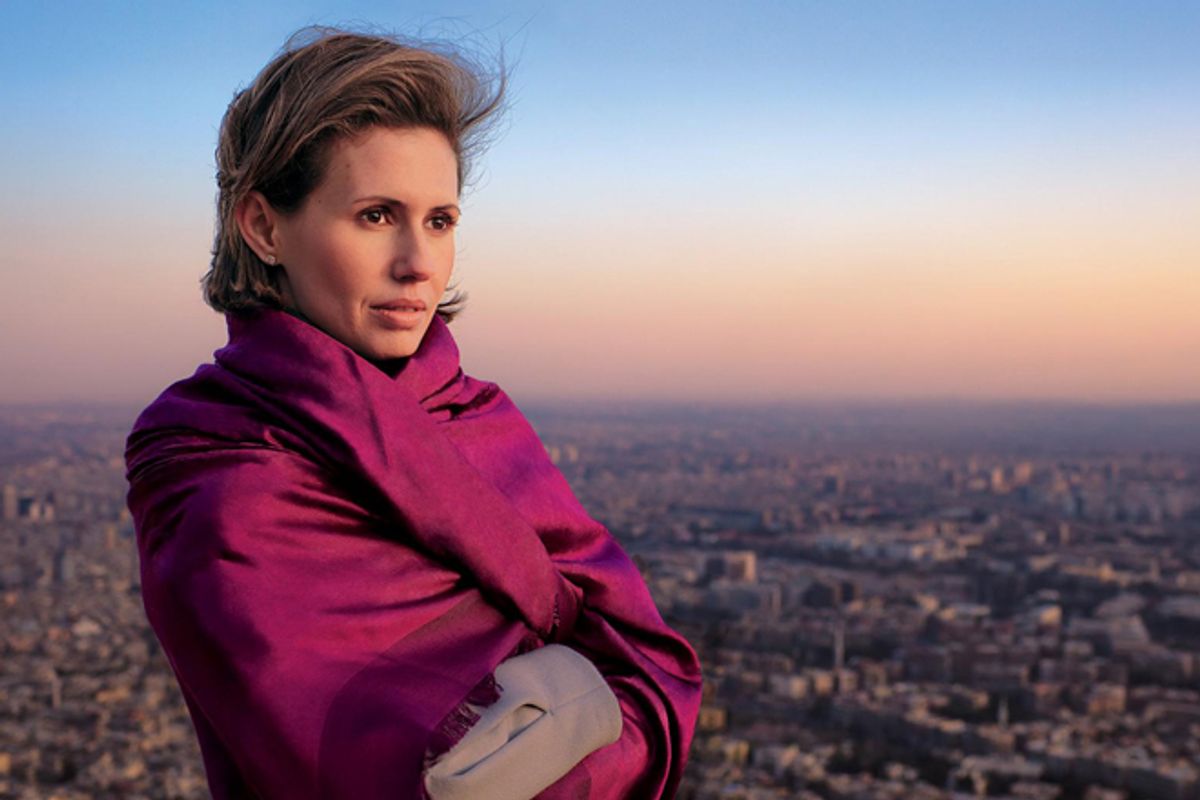 “Extremely thin and very well-dressed, and therefore qualified to be in Vogue” is a memorable quote from the former editor of French Vogue, first issued in April, which has returned to the chatter this morning thanks to a front-page New York Times story on Syria’s image-making. Joan Juliet Buck was talking to NPR about how her notorious Vogue profile of Asma al-Assad – now inconveniently associated with a bit more bloodshed than is really socially acceptable these days – came to be.

The quote says a lot about how, with very little effort, the essentially politically agnostic values of fashion and consumption can be used to ugly political ends. This particular exploit cost the regime only $5,000 a month in a P.R. retainer -- less than the crystal-encrusted Louboutins that Asma coveted.

But a new statement from Anna Wintour, issued Sunday to the Times, says even more. “Subsequent to our interview, as the terrible events of the past year and a half unfolded in Syria, it became clear that its priorities and values were completely at odds with those of Vogue.” Where Buck was very honest, maybe too much so, Wintour is being utterly disingenuous. It’s true that Vogue is not in the business of massacre or anything close to it, but there is nothing in particular about its pages' grown-up princess fantasies that is “at odds” with the life of Asma al-Assad.

I admit that when the Vogue story was published last year I didn’t understand what the fuss was about, glossy magazines having been my beat for several years at Women’s Wear Daily, the fashion trade owned by Vogue parent Conde Nast. Vogue’s pages regularly vacillate between its version of meritocracy (the comelier success stories of business, tech, politics, etc.) and an older system requiring a narrower set of genetic lottery numbers: Thin and beautiful girls whose job it had become to be so, and thin and (perhaps slightly less) beautiful girls and women who were born or married into the right families and can afford the clothes. This being an era of globalization, some of those families made their fortunes in ways we may not know and better not think too much about, even when technically legal. What made Asma Al-Assad so different? Was the problem simply bad timing? The pretense of this being about more than another photogenic person in a different setting? Insufficient use of ironic distance or nods to atrocity?

Of course, in Syria, where actual journalism has only become more life-threatening or outright impossible, this is thrown into particular relief. But it’s not different in kind from the P.R. complex as it is practiced elsewhere. This time around, it came with a little nose-holding about how Assad wasn’t like those other, flashier Middle Eastern kept women buying straight from the runways (“Her style is not the couture-and-bling dazzle of Middle Eastern power,” Buck informed her readers, “but a deliberate lack of adornment." Even the wives of dictators have a hierarchy in which one mustn’t try too hard). There was also enough light Orientalism to go around, particularly in the French press -- Asma was “the element of light in a country full of shadow zones” – doubles as a reference to fabulous highlights!

Vogue’s original statement on the piece included a confused reference to the country not being “as secular as we might like,” but pointed out that the access Buck had gotten was “a way of opening a window into this world a little bit.” Also cracking that window in a manner quite unlike, say, Marie Colvin or Anthony Shadid, and winning that access: Barbara Walters, who got the Bashar al-Assad interview but also had to apologize for putting good words in on behalf of his well-born young press aide, Sheherazad Jaafari.

Jaafari is one of two young women whom the Guardian identified from a raft of leaked emails as being at the “core” of “a group of young, Westernized Syrian expats” on whom Assad became “increasingly reliant.” Those aides had more in common than their fancy educations, the Guardian notes: “Assad bypassed his male aides” for a group of women, sociable and cosmopolitan types who advised him on the public-facing functions of oppressiveness. One more in the many depressing notes in this affair is the fact that making the hideous presentable is still mostly a woman’s job.