Gabby's seat up for grabs

Arizona votes today to fill Gabrielle Gifford's seat in the House. Is the race as important as pundits claim? 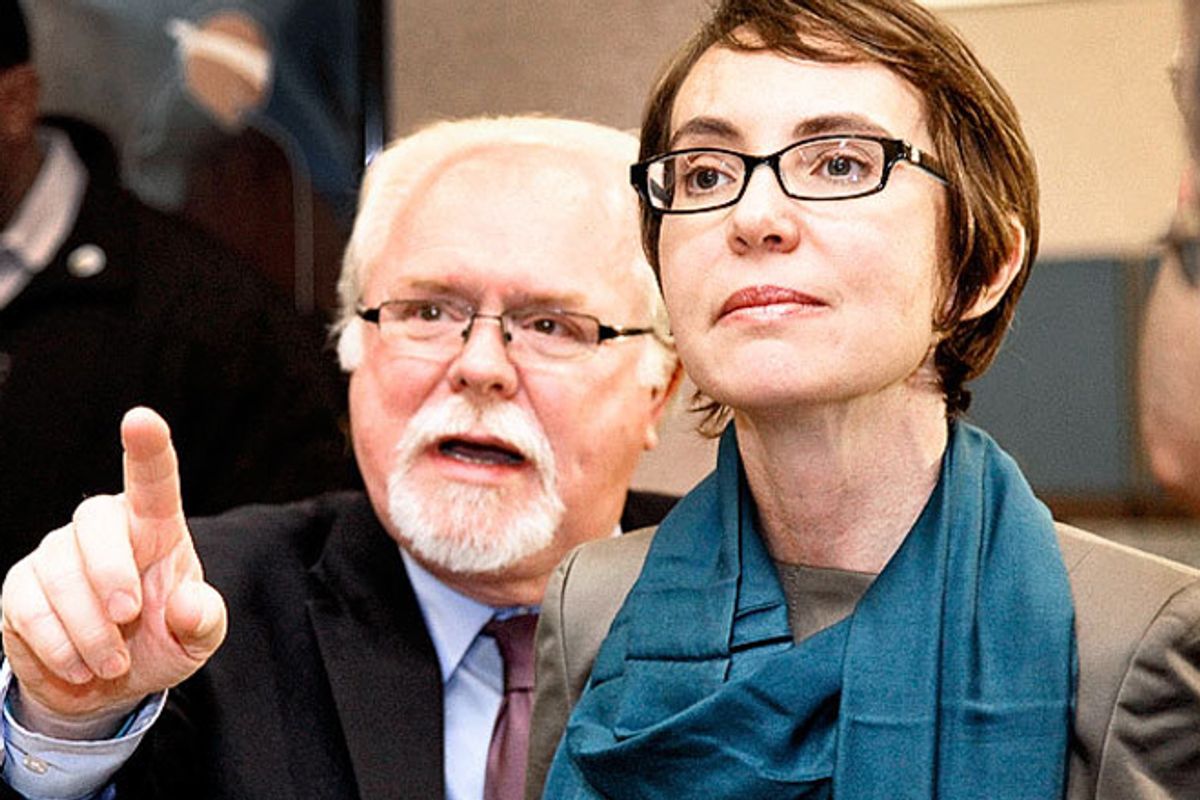 Another week, another special election imbued with tremendous national importance. This one is in Arizona’s 8th Congressional District, where Democrats are hoping to salve the wound of their bitter loss in Wisconsin's recall election with a win, and Republicans are looking for a one-two punch to claim momentum heading into November.

But in some ways, it’s history repeating itself. The special election, triggered when former Democratic Rep. Gabrielle Giffords resigned her seat in January to focus on her recovery from her 2011 shooting, pits her former close aide Ron Barber against her 2010 opponent, Jesse Kelly.

That earlier race was decided by just 3,500 votes out of more than 273,000 cast, and today’s race is expected to be close as well.

There’s been little reliable polling in the district for most of the race, though a PPP out yesterday no doubt caused some Democrats to swoon in the desert heat when it showed Barber up 12 points over Kelly. Even better, it showed that 57 percent of voters said they’ve already cast ballots (Arizona has generous absentee voting rules) and of those voters, Barber enjoys a 21-point advantage. Voters planning to vote today are evenly split at 46 to 45. However, the PPP appears to have over-sampled Democrats. The survey had 6 percent more Democrats than Republicans in a district where the GOP has a big voter registration advantage and the district leans red.

While not quite as hyped as last week’s contest, cable news will almost certainly be dominated today by speculation about what today’s tea leaves mean for President Obama and Mitt Romney in the fall. But how much does this contest really tell us about the presidential race, or even other House and Senate races?

“Not much,” cautions Barbara Norrander of the University of Arizona’s School of  Government & Public Policy. “It’s one out of 435 congressional districts,” she noted dryly to Salon, sounding a bit exasperated after fielding numerous calls from reporters all day.

Who remembers Democrat Kathy Hochul’s May 2011 special victory in upstate New York, which was billed as a national harbinger? Both parties rushed to nationalize that race, dumping $6 million in it, but no one today seems to think that Obama is well on his way to victory in November thanks to Hochul’s win.

Today’s race has also been nationalized, with at least $3 million spent. “It seems like we’ve been inundated,” Norrander said.

Granted, it’s a swing district and a key pickup opportunity for Democrats, who need 25 seats to take back the House majority. But no matter who wins today, they’ll have to do it all over again in a few months. The winner will merely serve out Giffords’ term, but then will have to run again in November, when redistricting will kick in and make the district more Democratic. Barber, who was also injured in the shooting, but stepped up to fill his former boss’ seat, is following a long line of staffers who have done the same, such as Paul Kirk, who temporarily filled the late Sen. Ted Kennedy’s seat, and Ted Kaufman, who took Joe Biden’s Delaware seat. But unlike those two, Barber has said he will run again in November, reportedly under intense pressure from the national party.

As with Wisconsin, the race will likely be decided by local factors, despite the GOP’s attempt to make it a referendum on Obama. The biggest force in the district is still Giffords, who remains hugely popular. She’s kept her profile low since the shooting, but is campaigning for Barber. And his connection to her, more than anything else, may give him the win. But whether that success can repeat itself in November, or in any other House, Senate or presidential race, remains to be seen.