His plan to raise his profile backfired. A speech by him now costs less than it did before he ran for president 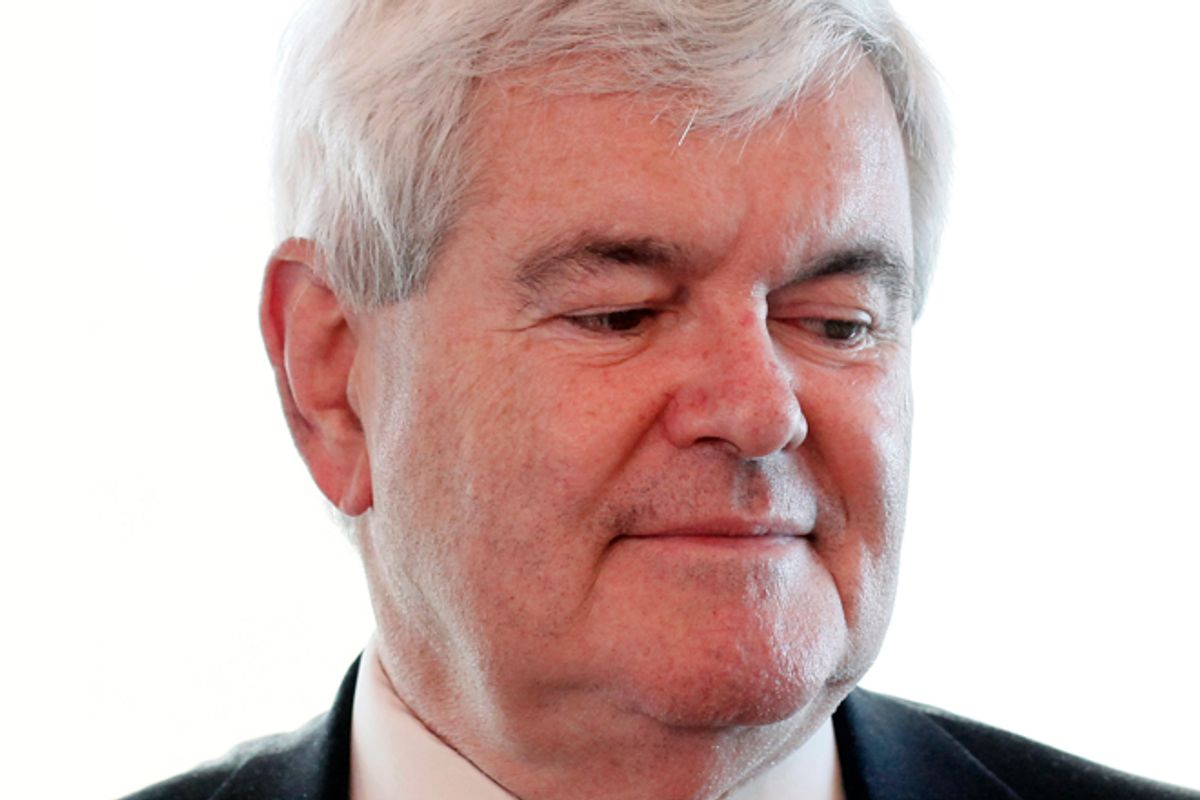 Apparently, the cost of booking a Newt Gingrich speech has come way down. According to BuzzFeed, the speakers bureau that represents the former House speaker has cut the baseline rate for a gig to $25,000 – down from the $60,000 starting rate Gingrich was commanding before his presidential bid.

This doesn’t mean Gingrich is on his way to the poorhouse, but it is another example of the damaging effect his presidential bid had on his marketability. After Gingrich lashed out at Fox News’ coverage of him to a group of Delaware Tea Party activists in April, Roger Ailes said publicly that “he isn’t going to get to come back to Fox News,” a platform that was crucial to Gingrich’s return from political exile last decade. And throughout the final six weeks of his campaign, the attention Gingrich received mainly took the form of ridicule, with the press chuckling at the delusional has-been who seemed more interested in meeting zoo animals than actual voters.

What’s interesting about this is that there was a general assumption through most of 2011 that Gingrich’s presidential campaign wasn’t really a campaign at all, and instead was sneaky effort to gain prestige and visibility and to build his own personal brand.

There was plenty of reason to believe this, particularly in the summer and early fall of last years, after Gingrich’s entire campaign staff quit on him and the candidate took off for a Mediterranean vacation. He seemed uninterested in raising money, building a real organization, or working early primary states at the grass-roots level. What he did seem interested in was having a place on the stage at nationally televised debates, making cable news guest appearances, and using campaign events to sell books and other Gingrich-themed merchandise. At the time, I suggested that Gingrich was channeling “The Producers” and had found the profit potential in a designed-to-fail campaign.

If that’s what he was up to, then his strategy has evidently backfired. But, of course, there’s also the fact that Gingrich ended up surging to the front of the GOP pack last November and December, opening up a double-digit lead over Mitt Romney and even picking up what was supposedly the most influential early primary state newspaper endorsement. It got to the point that Gingrich could say that “it's very hard not to look at the recent polls and think that the odds are very high I'm going to be the nominee” – and more than a few people believed him.

But then the GOP’s opinion-shaping elites turned their guns on him (as did a lavishly endowed pro-Romney super PAC), bursting the Gingrich bubble by New Year’s. It still wasn’t over, though, with a second Gingrich surge-and-crash playing out in mid-January, when he won a startling victory in South Carolina that set off another round of GOP elite panic, which killed off Gingrich for good.

It’s hard to know what to make of Gingrich’s presidential bid. The broad hostility of his party’s elites to the idea of Gingrich being their standard-bearer probably meant that he never actually had a chance at winning the nomination. But whether Gingrich had any inkling of this is anyone’s guess. And if he really was just looking to sell books and drive up his speaking fees, he probably wouldn’t have stuck with his campaign through April, inviting all of the brand-killing ridicule he endured. We may never know why Newt Gingrich ran for president. Maybe he just didn’t have anything better to do.