New revelations about his pandering to the anti-gay right as Mass. governor could be a glimpse of what’s ahead 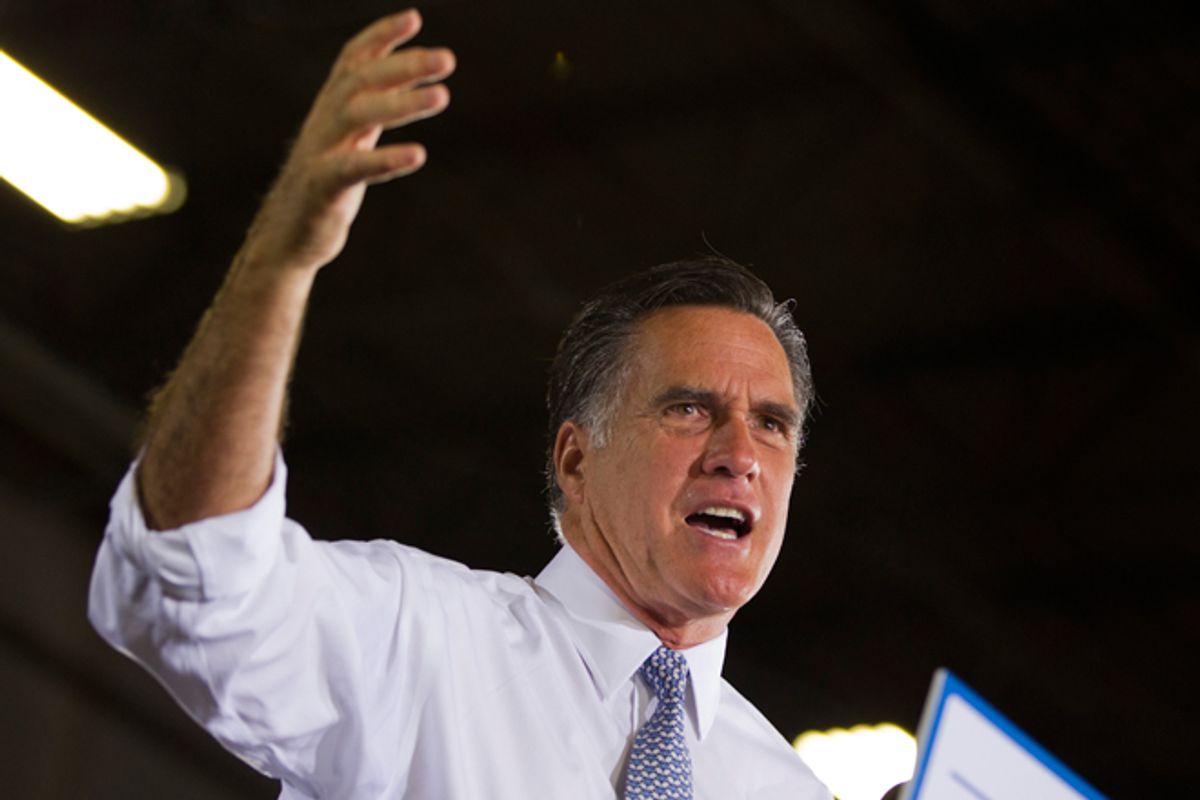 A Boston Globe report today reveals that Mitt Romney’s gubernatorial administration in 2006 quashed the publication of an anti-bullying guide for schools on the grounds that it included the words “bisexual” and “transgendered.”

As Murray Waas and Christopher Rowland note in their story, this was one of several actions that Romney took late in his term that aligned him with the culturally conservative religious voters who hold sway in national Republican politics. He also picked a fight with the Governor’s Commission on Gay and Lesbian Youth over its budget and a parade it organized and used his line item veto power to cancel out funding for counseling for LGBT violence victims.

This was consistent with Romney’s broader self-reinvention in 2005 and 2006, as he aggressively sought to distance himself from an array of moderate-to-liberal positions and actions he’d taken during his years in Massachusetts politics. The sudden hard-line posture on gay issues, for instance, was a far cry from the way Romney presented himself during his 1994 Senate race, when he vowed to do more for gay rights than Ted Kennedy, and in 2002, when he saw a gay pride event as an opportunity to pick up votes.

His transformation extended to other areas, as well, with Romney reversing himself on abortion, issuing an executive order to authorize state troopers to assist in rounding up illegal immigrants, and spending hundreds of days outside the state, often to deliver speeches ridiculing Massachusetts to Republican audiences elsewhere.

It all reeked of political posturing and calculation, so much that it probably kept a fair number of conservatives seeking a “pure” alternative to John McCain from siding with him in ’08. But in the long run, it seems to have worked out for Romney. By this year, enough time had lapsed that Republicans were willing – however reluctantly – to make him their nominee, even as the memory of his Massachusetts past has fed a popular belief that Romney is a secretly reasonable politician. This perception is invaluable to Romney now, as Democrats remind general election voters of all of the unsettling positions Romney staked out during his pursuit of the GOP nomination. If the public concludes Romney was simply faking it in order to win, they’ll probably be less worried about kicking out Barack Obama and handing him the keys.

The counter to this, of course, is that Romney will be just as beholden to the GOP’s conservative base as president as he was as a primary candidate – that the threat of an intraparty revolt will hover over every decision he makes, giving him no choice but to adhere to the course that the right sets. Think of the powerlessness that Speaker John Boehner now has with House Republicans; that’s probably the legislative equivalent of a Romney presidency.

If this is the case, then Romney will be left to keep his secret reasonableness a secret for as long as he’s president -- if his secret reasonableness even exists, that is. Gay rights is a good example of this. The positions that Romney staked out in ’94 and ’02 put him in sync with the Massachusetts electorate, but what Mitt Romney the man actually thinks about gay issues is anyone’s guess. Maybe he was faking it early in his political career, or maybe he’s been faking it these past few years. Or maybe he doesn’t really have any opinions at all.  As a Republican president at the mercy of congressional Republicans, though, it’s not hard to see how he’d approach the issue. Their agenda would be his agenda.

Would that mean reinstating “don’t ask, don’t tell”? Probably not. For one thing, Romney has indicated – very hesitantly – that he’d prefer not to go down that road, presumably because it would be an unpopular move outside the GOP base. But even if the GOP base insisted on it, Romney would probably be saved by the Senate, since five Republican senators voted to end DADT in 2010; so if a reinstatement bill cleared the House in 2013, even a Republican-controlled Senate probably wouldn’t pass it. But beyond that, any legislation that would advance legal protections for gays and lesbians, like the Employment Non-Discrimination Act, would be a nonstarter, and Romney would face pressure from conservatives to use his Justice Department to fight their culture war, and presumably he’d comply. The price of not doing so would be too high.