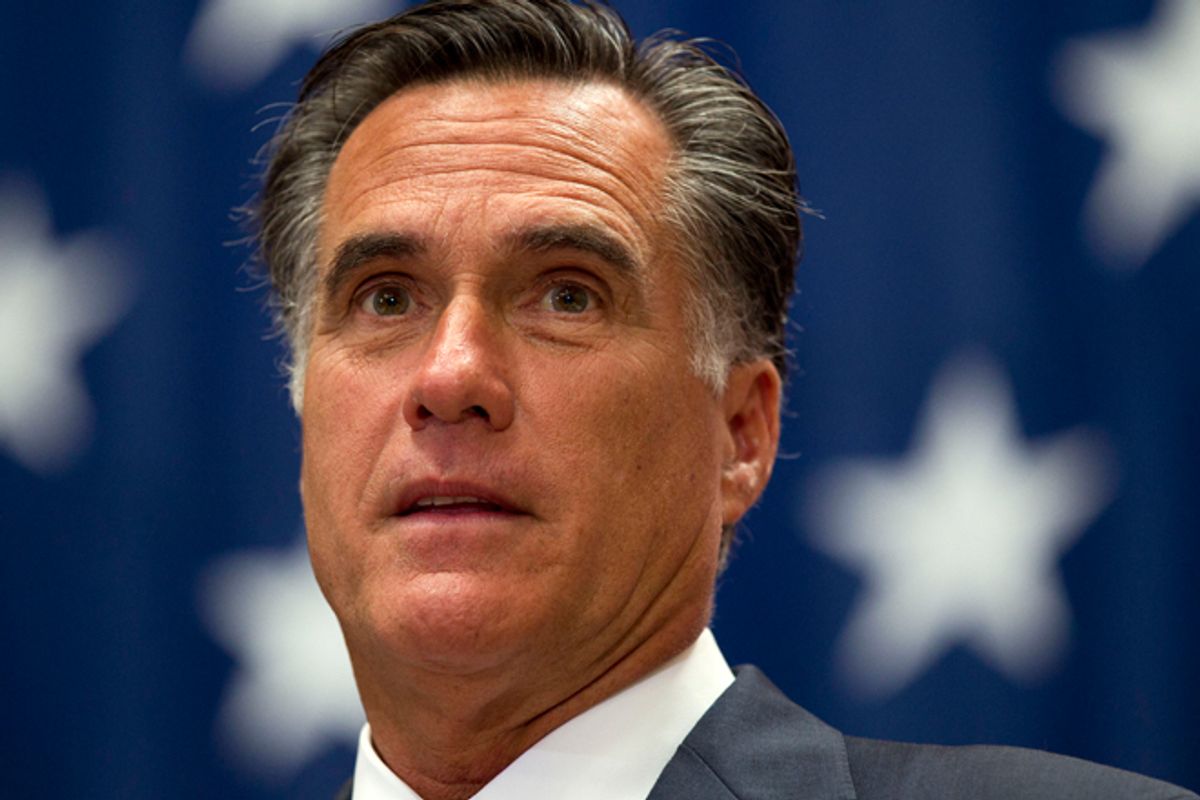 When the Wall Street Journal gives an article prime real estate on its home page, one assumes the newspaper's editors want you to take it seriously. Let's test out this thesis with "Six Trillion Ways the Candidates Differ, an article by Gerald Seib that received ample play Tuesday morning.

Seib's basic assertion is straightforward: A comparison of Obama's and Romney's budgets for the next 10 years reveals that Obama is slated to spend $6 trillion more than Romney. So there you have it: The choice in 2012 is a choice between reckless spending and austere fiscal responsibility.

The math, on its face, is not wrong. Richard Kogan, a senior fellow at the Center on Budget Policy and Priorities, confirms that if Romney follows through on his pledge to cut government spending to 20 percent of GDP by the end of his first term, he'll have to slash $688 billion from the budget in that year alone.

But the math is also entirely illusory. You don't have to look far to see gaping holes in Seib's argument, holes big enough for the entire state of Massachusetts to drive through with Great Danes strapped to the roof of every car.

Hole No. 1) In contrast to Obama, whose 10-year spending plan is detailed in his most recently released budget, we don't know much about Romney's agenda, because, as Seib concedes, " Mr. Romney ... has avoided presenting a similarly detailed plan."

Hole No. 3) "Because of his parallel calls for tax cuts, it isn't likely Mr. Romney's plan actually would eliminate the deficit despite its lower spending."

This is embarrassing. Eliminate the deficit? There's almost no way in which Romney's plan wouldn't make the deficit much, much worse. Seib's own article makes it exquisitely clear why Romney hasn't provided specific details on how he would spend $6 trillion less than Obama over the next 10 years. Because it's impossible to achieve his goals without guaranteeing a massive GOP defeat in 2020.

Romney's proposed tax cuts are huge -- bigger than George W. Bush's -- so even without boosting military spending, he wouldn't be able to achieve his imaginary spending cuts without either massively slashing politically popular programs like Medicare or blowing up the deficit into realms unimagined by even the most ambitious Big Government Democrat.

According to a May 12 study on the proposed Romney budget co-authored by CBPP's Kogan, to make his numbers, Romney would have to cut 29 percent of the budget for Medicare and Medicaid by 2016. That number would grow to 40 percent by 2022.

And that's along with similar cuts everywhere else, cuts that would devastate Americans struggling in a tough economy.

The cuts that would be required under the Romney budget proposals in programs such as veterans’ disability compensation, Supplemental Security Income (SSI) for poor elderly and disabled individuals, SNAP (formerly food stamps), and child nutrition programs would move millions of households below the poverty line or drive them deeper into poverty. The cuts in Medicare and Medicaid would make health insurance unaffordable (or unavailable) to tens of millions of people. The cuts in non-defense discretionary programs — a spending category that covers a wide variety of public services such as elementary and secondary education, law enforcement, veterans’ health care, environmental protection, and biomedical research — would come on top of the deep cuts in this part of the budget that are already in law due to the discretionary funding caps established in last year’s Budget Control Act (BCA).

Furthermore, one wonders why Seib didn't bother to mention Romney's pledge to bring us back to a balanced budget during his administration. Wouldn't that make the contrast between him and Obama even clearer? Or maybe that was too fantastical -- according to Kogan, balancing the budget by 2022 would require nearly 60 percent in cuts to Medicare et al. By confining himself to Romney's pledge to reduce spending to 20 percent of GDP, Seib manages to avoid the astronomical slash-and-burning of the entire social safety net and ends up with contemplating cuts that, in Kogan's words, are "merely extremely brutal."

But those cuts are not going to happen. A Republican Congress will not sign its own death warrant by slashing Medicare in half. If Seib was honest, he'd tell his readers that a Romney presidency virtually guarantees a rerun of the George W. Bush show. Tax cuts plus military expansion will make it impossible to pay for social welfare programs that the voting public supports. The deficit will grow. Or, in other words, complete fiscal irresponsibility.