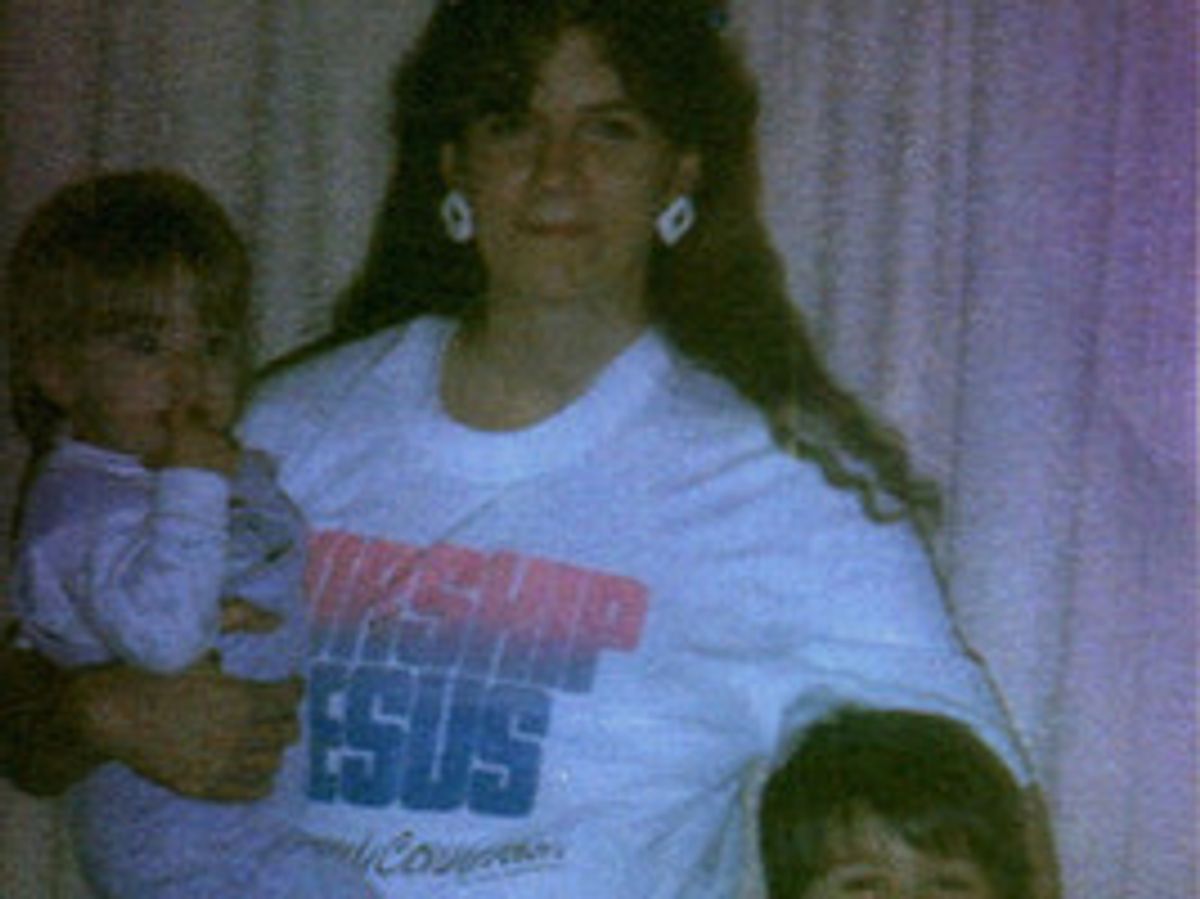 Nathan Jordan, his sister Allysa Jordan and their mother.
--

Nathan Jordan is serving a 170-year sentence at Sterling Correction Facility in Colorado for aggravated robbery, motor vehicle theft and possession of a weapon.

But most of his crimes, which did not result in anyone’s death or injury, took place in in the late 1990s, before he was 18 . According to Colorado law, he was a juvenile offender.

So how did Jordan end up with the kind of sentence that might be meted out to serial killers or career criminals?

The answer is devastatingly simple: he was tried in adult court.

Prosecuting offenders under the legal age of majority in adult courts (the age varies from state to state) is not supposed to happen.

Juvenile courts were established over 100 years ago, in response to a consensus of opinion from educators and other experts that juveniles were entitled to be considered differently than adults in the criminal justice system.  Psychological and medical research since has shown that the brains of juveniles are still not developed sufficiently to understand the consequences of their behavior and reign in self-destructive impulses.

Nonetheless, between 200,000 and 250,000 juveniles are processed annually through the adult criminal court system, according to a 2011 report by the National Institute of Corrections.

In 2009, the last year for which such statistics were available, a federal Bureau of Justice Statistics  report estimated that approximately 10,000 youth were serving time in adult prisons or jail around the U.S.—mostly for robbery offenses on at any day of the week

Even though many will get out before they turn 21, their exposure to the adult justice system will have done lasting damage to their personal lives. With a criminal record in their background, many will be unable to find well-paying jobs or careers; and some may re-offend—intensifying the  cycle of crime and hardship that has undermined many poor urban neighborhoods.

“Incredible physical and mental harm can happen to youth in adult jails,” says Sarah Bryer, Executive Director of the National Juvenile Justice Network, a national not-for-profit based in D.C. which represents a consortium of juvenile advocates.

“[Adult] prisons are not set up to rehabilitate youth; [they provide] no education, no help and no services.”

Research backs up the arguments of critics like Bryer that trying juveniles in adult court is counterproductive.

A 2007 study by the Task Force on Community Preventative Services of the Center for Disease Control, for example, found that juveniles subject sent to the adult system  were more likely to be arrested for subsequent crimes, including violent crime, compared with those retained in the juvenile justice system.

One reason for the high number of juveniles processed through adult courts is the difference in the age of majority from state to state.

In New York anyone over 16 can be tried in adult court, while in neighboring Connecticut the juvenile system encompasses anyone under the age of 17. Indeed 247,000 of the juveniles in the adult court system nationwide are there because of jurisdictional age issues, reports the National Center on Juvenile Justice, the research arm of the National Council of Juvenile and Family Court Judges, a national not-for-profit based in Reno Nevada.

Young people are also transferred into the adult court system through the use of judicial waivers or prosecutorial discretion, under which court authorities can transfer a juvenile judged to be “dangerous” or a habitual offender into adult custody.

According to the 2011 National Institute of Corrections report, 46 states provide for judicial waivers, in which the judge can decide that the offender should be transferred to the adult criminal justice system.  Some 29 of these states also allow courts to exclude young people from the juvenile justice system based on the category of the offense, such as violent crimes such as murder or rape.

Perhaps the most little-known tool is the statutory discretion granted to prosecutors in some jurisdictions to decide where and how they want to proceed with cases against juveniles. The practice is called “direct file”—and it is used by 14 states, including Florida, Colorado and Arkansas, plus the District of Columbia today.

That, in fact, is what trapped Nathan Jordan.

As a troubled adolescent growing up in Denver, he was in and out of group homes and juvenile detention centers. At the age of 15,  he robbed a convenience store, the first of a flurry of increasingly serious offenses. In the incident which landed him in court for the last time, he carjacked a woman’s car (with her in it). He was apprehended with a gun in his possession. —

A determined prosecutor decided Jordan needed to be taught a harsh lesson.

Jordan’s younger sister Allysa, who has been working to bring attention to his case, concedes he needed to be punished. But she argues the system should have taken his background as the abandoned child of an addict mother, and his youth,  into consideration before condemning him to a life behind bars and treating him, in her words, like a “monster.”

“He’s not a monster,” insisted Allysa, 25, who currently works as a professional gardener. “He knows he was wrong for his crimes, but he shouldn’t rot in prison.”

Cases like Jordan’s have strengthened a growing bipartisan consensus “that we need to move kids out of the adult system,” says Liz Ryan, CEO of the Campaign for Youth Justice, a Washington, D.C. based national advocacy group.

But one of the obstacles to reforming the system is that data about the number of juveniles transferred to adult court is incomplete. Only 13 of the 46 states that use waivers publicly report the total number of transfers, including  through direct file. Even fewer provide information on offense profiles, demographic characteristics, or details regarding processing and sentencing.

Current policies are a legacy of the nationwide response to a wave of juvenile violence in  the late 1980s and early 1990s, which  led some criminologists to predict the rise of “super predators”—incorrigible juveniles delinquents who were  threats to public safety.

The fears triggered a tough-on-crime response by politicians. Statutes providing for judicial waivers and other procedures such as direct file which either allowed or mandated that certain cases against juveniles be filed directly in criminal court, bypassing juvenile court altogether, proliferated and expanded dramatically.

Legislatures in nearly every state revised or rewrote their laws to broaden the scope of transfers.

Some created lower age thresh-holds; others established certain categories of offenses.  But these laws subtly changed the judicial process, reducing  judges’  traditional discretion over sentencing, and giving prosecutors effective authority in determining the outcomes of juvenile cases through their decisions about charging.

The shift reflected a national trend.  During the “tough-on-crime” 1980s, mandatory/minimum sentencing laws for possession or dealing in drugs like crack cocaine condemned thousands of individuals—many of them from urban black neighborhoods— to long stays in prison.

Yet, violent juvenile crime is declining.  Arrest of juveniles for homicide offenses has dropped to levels below those of 1980, with 250 arrests per 100,000 for violent crimes in 2010, the last numbers available, but number of juveniles in the adult criminal justice system continues to remain high.

A  2012 study entitled, “Violent Crime Rates Continue to Fall Among Juveniles and Young Adults” by Jeffrey Butts, the Director of  Center for Research and Evaluation at John Jay College of Criminal Justice in New York,found that transferring juveniles to criminal court is not correlated with falling youth violence.

Nevertheless, prosecutors say they still need the discretion granted by statutes to decide whether to send a juvenile to criminal court .

“There should be some punishment and some community protection,” says David LaBahn, president and CEO of the Association of Prosecuting Attorneys,who points out there is no “constitutional right” to be tried in juvenile court. .

LaBahn notes that although the juvenile courts were established as a response to the need for social services for troubled youth, the protection of public safety is still paramount.

Prosecutors should be able to respond to cases “where the rehabilitation model does not work,” he says.

Every case that gets transferred has a story and reason behind (it),” adds LaBahn.

Advocates in Colorado and elsewhere, however, say the direct file statue has cast a wider net than the violent offenders it was originally intended for.

A recent report, “Re-Directing Justice: The Consequences of Prosecuting Youth as Adults and the Need to Restore Judicial Oversight,”   by the Colorado Juvenile Defender Coalition (CJDC) found that 85 percent of the state’s direct-file cases involved middle- to low-level felonies such as robbery or assault.

Is public safety served by putting troubled and violent youths behind bars for biblical-length sentences?

Dwayne Betts provides one example that suggests too many young lives are being written off prematurely in the justice system.  Betts was 16 when he was arrested and sentenced in adult court in Fairfax, VA., in 1997, to nine years for a carjacking.  After serving eight and a half years of his sentence at five different prisons in Virginia, he was released March 4, 2005.

Four years later, he graduated from the University of Maryland (where he was commencement speaker) with a BA in English, and went on to graduate school at Harvard University.

Now in his 30s and a father of two, Betts counts himself lucky.

Some of the cellmates Betts left behind are serving sentences of 30 or 60 years for crimes committed as teenagers.  They are, he worries, forgotten.

“Young people in the system are invisible,” Betts said at juvenile justice conference held in April at John Jay College.

In one encouraging sign, some of the leading voices for change have come from inside the system.

New York State Commissioner of Office of Children and Family Services (OCFS) Gladys Carrión has focused on a rejuvenation of the state’s juvenile justice system since she was appointed in in January 2007.

Carrión closed 18 juvenile detention centers in the first five years of her tenure. Although her efforts ran into controversy from upstate legislators, angry over the loss of some 1,000 jobs at the centers, Carrión says more changes are necessary, including raising New York’s age of minority.

Arguing that only the most violent offenders should be held in detention facilities, observing that the majority of the youth in the system would be better served if they were returned to supervised programs in their home communities.

That, she adds, it would help the bottom line in an age of economic constraints on local governments.

“The cost of keeping a young person incarcerated in New York State is about $266,000 per year, mostly with terrible outcomes,” Carrion said at the New York juvenile justice conference.

Others clearly agree that the juvenile justice system needs to be overhauled and re-examined. North Carolina and Vermont are currently working on putting “raise their age” bills before legislators this year.

And in April 2012, Colorado amended its direct file provision as a result of a campaign by the Colorado Juvenile Defender Coalition and bipartisan support in the state legislature . The new bill, which Gov. John Hickenlooper signed into law after it passed the legislature with bipartisan support, bars district attorneys from charging juveniles as adults for many low and mid-level felonies.  It also raises  the age at which young offenders may be charged as adults for more serious crimes from 14 to 16.

That may help Nathan Jordan.

He’s currently working with the Colorado Juvenile Defender Coalition to get his case—and his 170-year sentence— reviewed.

But thousands of others still don’t.

Cara Tabachnick is Managing Editor of The Crime Report. She welcomes comments from readers.