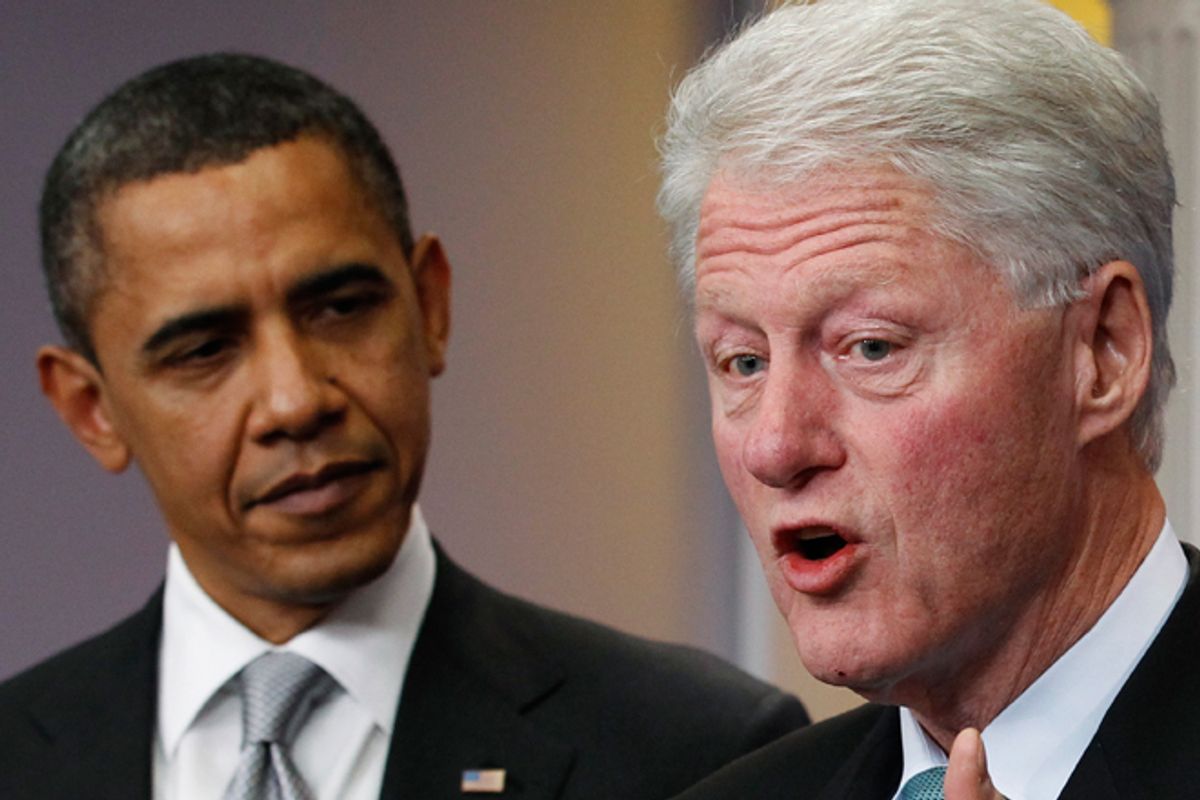 Are "Clintonites" undermining the president by spreading panic to his reelection campaign? Not really, no. Some people formerly associated with Bill Clinton did release a strategy document saying the president should change his economic messaging in order to appeal more to whites in battleground states. Then Zeke Miller at BuzzFeed called some other, different people associated with Bill Clinton, and asked them to comment on the document, and made it a story of Clintonites desperately begging Obama to change course before it's too late.

The two political operations — Clinton and Obama — have never seen eye-to-eye, and now some of the top voices of the Democratic 1990s have shifted into open criticism of a political operation they cast as overly negative and reactive, and failing to offer a positive set of plans for the economy.

This makes "the Clinton operation" sound like a unified front and not the contradictory impulses and statements of a bunch of different Democratic Party figures. You have, first, the veterans of Clinton's 1992 campaign advising the president to, quite literally, promise to tax-and-spend our way out of this recession. They are led in this effort by Stan Greenberg, who has, for years now, been advising Democrats to win over working-class whites with economic populist messages, and James Carville, who has always advocated for the sort of explicitly partisan campaign messaging that advocates of moderation find distasteful.

The research memo is actually really interesting and worth a read (it's short). The gist, based on open-ended focus groups in Columbus, Ohio, and suburban Pennsylvania: A message that things are improving, or ads highlighting job growth and economic recovery, aren't working, because things still suck so much for so many people. The "things are getting better" argument isn't persuasive to a person for whom things have not gotten better. What would be more effective is a promise to make things better. (And a promise to tax rich people, because that literally always polls well, among all voters.)

Then you have the veterans of Bill Clinton's 1996 reelection campaign, where he was aided by right-wing Republican overreach and a strong economy. These guys are Mark Penn and Doug Schoen, both brought in when the 1994 Republican Revolution spooked Clinton into tacking right, and both essentially grifters. Their advice is that the president should "talk about the future" but not actually say anything about raising taxes or spending money.

Schoen is BS'ing here. When he says "they are absolutely correct" he means that if the president actually began getting as populist as Greenberg and Carville want him to get, Schoen would write an Op-Ed with his friend Pat Caddell accusing the president of being a socialist.

Penn is at least honest enough to acknowledge that he doesn't actually agree with the 1992 vets:

"I think that the president needs a new economic plan that takes the country into the 21st century global economy, a plan with emphasis on education, infrastructure, innovation, and growing exports. A plan that creates new economy jobs for a country that wants to move forward," he told BuzzFeed, adding that "most of the messages [in the memo] are too much about raising taxes and raising spending in a public that has changed quite dramatically from 1992."

It's not 1992 anymore, according to the man who refuses to ever admit that it's not 1996 anymore (and that his much-vaunted strategy of embracing random bits of symbolic right-wing rhetoric had next to nothing to do with the outcome of the 1996 election).