In praising Reagan he rebuked Romney, and showed a remarkable lack of confidence in his party's November chances 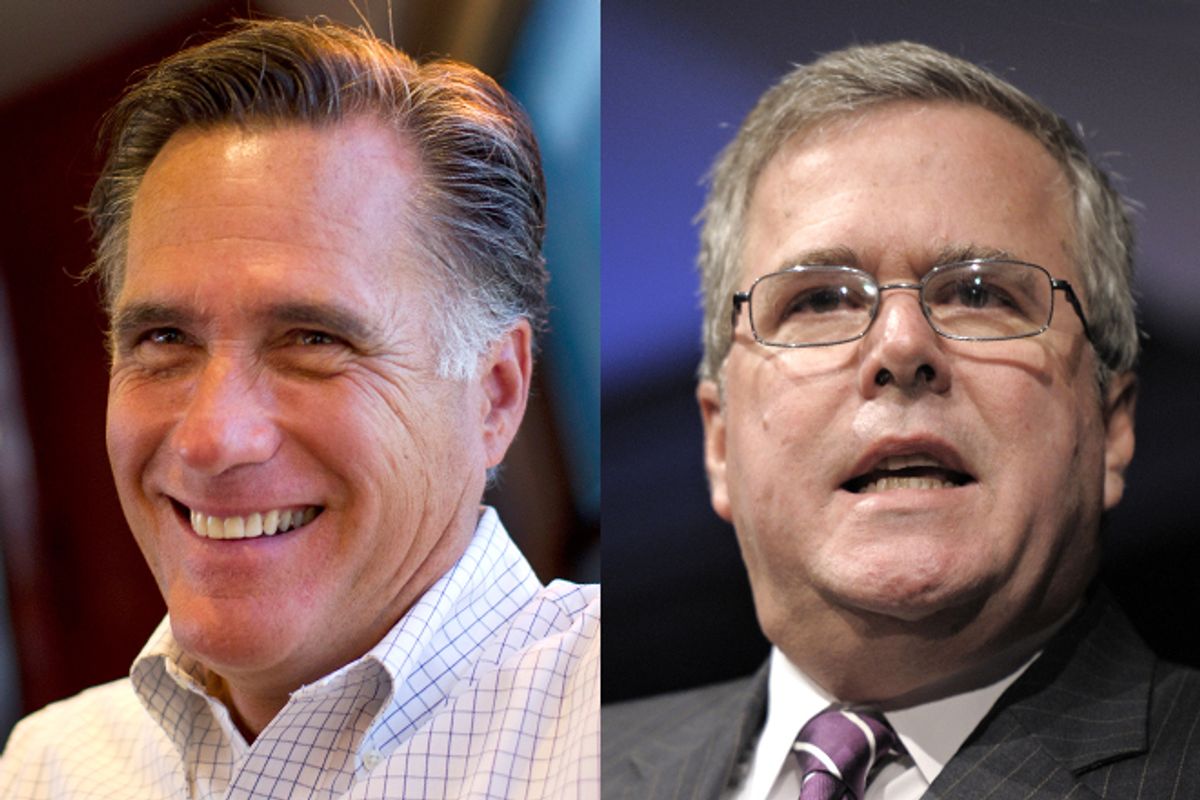 Tax-ayatollah Grover Norquist called it "foolish" and "bizarre," but former Florida Gov. Jeb Bush made a bid for party leadership with his calculated remarks praising Ronald Reagan and criticizing his party's no-compromise leadership. What got less attention was Bush's implicit disrespect to his party's nominee, Mitt Romney – as well as his apparent lack of confidence in Romney's ability to defeat President Obama in November.

"Back to my dad’s time or Ronald Reagan’s time, they got a lot of stuff done with a lot of bipartisan support that right now would be difficult to imagine happening," Bush famously said, declaring Reagan and George H.W. Bush "would have had a hard time [in the GOP] if you define the Republican Party — and I don’t — as having an orthodoxy that doesn’t allow for disagreement."

Bush is attacking a point of view that Romney has essentially embraced. The presumptive GOP nominee has avoided every opportunity to stand up to Tea Party crazies, whether by distancing himself from birther bully Donald Trump, or being the only person during the Republican primaries who would accept a theoretical 10-to-1, spending-cuts-to-revenue deficit "grand bargain."  (In fact, just last week Bush said he hoped Romney would accept such a deal as president, earning an earlier rebuke from Norquist, who called it an "insult" to Romney.)

Although his Reagan remarks got more attention, Bush was even more directly critical of Romney on immigration. “Don’t just talk about Hispanics and say immediately we must have controlled borders,” said Bush, who is a member of the candidate’s Hispanic Steering Committee (presumably because his wife is from Colombia?). "It’s kind of insulting when you think about it. Change the tone would be the first thing. Second, on immigration, I think we need to have a broader approach."

Finally, Bush deflated the premise of Romney's entire campaign, insisting there isn't much any president could do to rev up the economy right now. "I think we’re in a period here for the next year of pretty slow growth; I don’t see how we get out, notwithstanding who’s president," Bush said. "We’ve got major headwinds with Europe and a slow down for Asia as well." That's a comment every bit as newsworthy as President Clinton suggesting Romney has a "sterling" business record, but it got little attention.

So while Bush has officially endorsed Romney, his remarks this week are a not-so-subtle vote of no-confidence in his November chances. These were not the comments of a party leader confident his team is going to rack up a big win in November. Bush's dire warnings are the kind of truth-telling – or political spin wrapped as truth-telling – more common in the week after one side is crushed in a landslide (as a Democrat, I recognize it from experience).

Bush himself is no profile in courage, however. His complaints might have made a difference in 2012 had he made them during the Florida primary, in the course of endorsing Mitt Romney. Romney won Florida anyway, and Bush endorsed him later, but the former Florida governor missed an opportunity to embrace the least right-wing 2012 candidate early, as well as chasten that candidate by delivering an endorsement that came with a warning.

A lot of people have raised questions about exactly what Bush is doing with his Reagan-Romney comparison, but I think it's pretty clear he's setting himself up for 2016, despite his wistful musing last week that he may have missed his window to run for president, and the time was "probably now."

But if Romney loses, there will be a bloody battle for the direction of the GOP, and Bush's argument won't necessarily be the one that prevails. I'm sure he'll be joined by mainstream Republicans like Dick Lugar, Olympia Snowe and others who've either been thrown out or driven out by the Tea Party. But look for the far right to be just as critical as Bush, from the other direction. No amount of Romney pandering can change the fact that he wasn't the base's candidate – together, the right-wing "not-Romney" candidates always did better than Romney when the primary field was more crowded. If the former Massachusetts governor loses, conservatives are likely to denounce him as another John McCain, a "moderate" pushed on the base by the party's establishment leaders who nonetheless couldn't beat Barack Obama. Another famous Texas politician's son, Sen. Rand Paul, is likely to be as influential as Jeb Bush in a post-defeat blame game, if not more so.

I talked about the way Bush's remarks undermined Romney with Michael Eric Dyson on MSNBC's "The Ed Show" Monday night: