Some saw Andrew Stanton's "John Carter" as classic Hollywood overreach, but it's best seen with an Eastwood epic 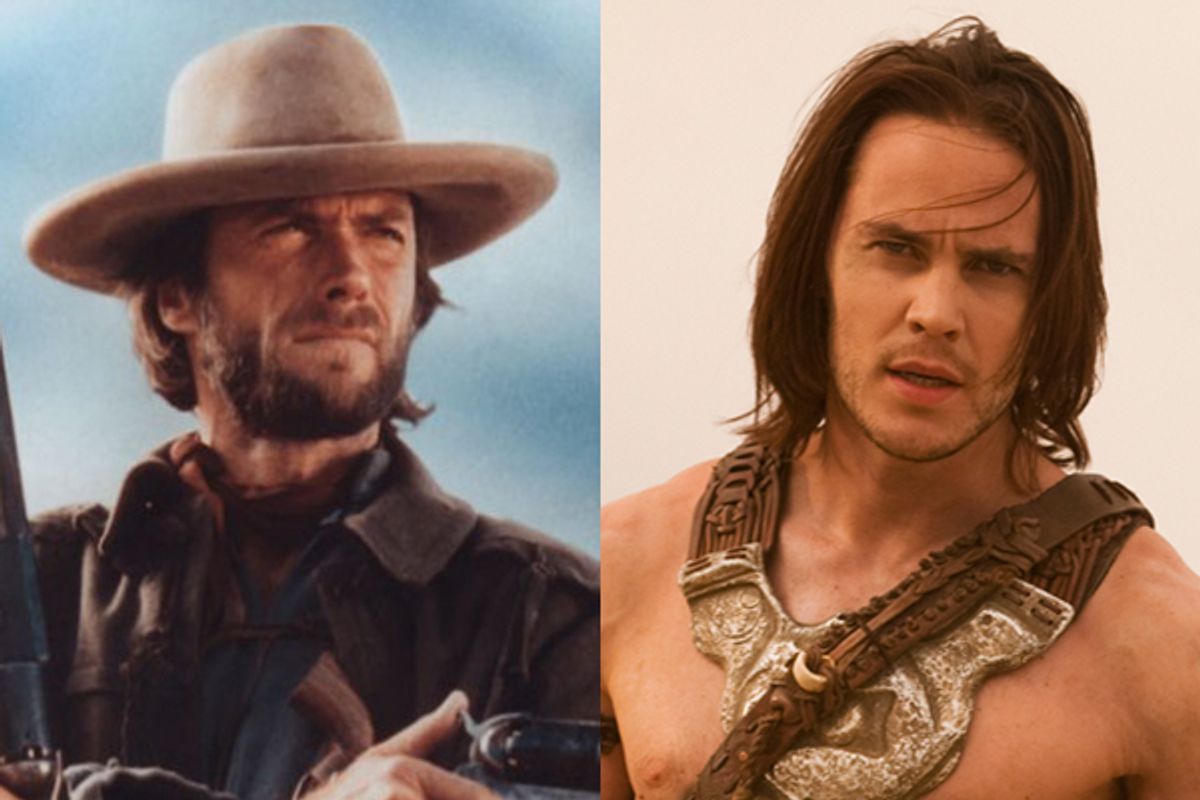 Since when did “passion project” become such a dirty phrase?

When Andrew Stanton’s magnum opus "John Carter" was released just two short months ago, you’d think he had committed some kind of original sin. Just about every article or review dwelled on the fact that either A.) the film was going to lose a massive amount of money, or. B.) Disney was insane to entrust a massive studio blockbuster to some naïve “artist."

The history of Hollywood is littered with artists going one Bridge Too Far, a distinguished field of creative carnage that began with D.W. Griffiths’ "Intolerance." The story is simple. Having gathered their chips through some mega-success, deranged creative types bet their stack on a personal epic. "Jaws" begets "Close Encounters of the Third Kind," a win, and then, Steven Spielberg craps out on "1941." "The Godfather" gets topped by a sequel, but soon "Apocalypse Now" comes staggering from the jungle. Francis Ford Coppola was lucky enough to make it out of that casino, but then, had to return to Vegas for "One From The Heart," the opening act of the slow-motion dissolution of his career. And of course, there is Billy Wilder’s corrosive masterpiece, "Ace in the Hole," a cynical treasure that cost him most of the goodwill he had earned from the previous 10 years of commercial success. We won’t mention "Heaven's Gate," as that is too damn easy. But, I will say, deep inside Michael Cimino’s deranged epic there is something mesmerizing. It deserves to be taken on its own terms as an deranged vision, clearly made – if not made clearly -- by some kind of cinematic idiot savant.

Savant comes to mind when one looks at Andrew Stanton. And the only thing that seems idiotic about "John Carter" is its running time. The original sin of this film is that, believe it or not, it is far, far too short. I’ll go out on a limb here and say that "John Carter" is the "Magnificent Ambersons" of insane, overproduced fantasy films – though in this case, the compression and cuts were inflicted by its own creator. The movie slowly sinks under a staggering amount of exposition and plot truncation, and the viewer is always one step behind, never to catch up.

What we are left with is the Cliff Notes of what, on say HBO, could have been the first season of the greatest mini-series ever – a fusion of "Rome" with "Game of Thrones." "John Carter" even shares its Caesar and Marc Antony with "Rome," Ciaran Hinds and James Puerfoy respectively. Both don’t have nearly enough to do, but what they do do makes you long for more, never a bad thing for any movie.

Still, the whole transcends the parts – though in this 2 hour and 15 minute highlight reel, one is left bereft at the stories and back stories that could – should -- have been told. Stanton was praying for at least two more sequels, and I think it is safe to say that those prayers will be going unanswered.

But for a movie gleefully proclaimed a disaster, so many scenes fly through your consciousness like the gossamer Martian airships. The sense of wonder that lifted Edgar Rice Burroughs' original works to the pantheon of fantasy literature suffuses every frame, and there is not an ounce of cynicism in any part of Stanton’s storytelling. Yes, there are many scenes that crash land as well. But this flight of fantasy is well worth taking, if only to bask in the true creative vision of someone who most definitely suffered for his art. Now, it is Disney’s turn.

Let me be clear. "John Carter" is a magnificent wreck. But the wreckage is worth watching. It is precisely the movie that Stanton had in his head – and I would rather be in Stanton’s mindset than caught in the Citizens United world of “corporations are people too”-styled vision-by-committee that attend the other Big Summer Releases.

A few weeks after the demise of "John Carter," the mega-disaster of “Battleship” was released, a completely soulless piece of corporate pandering that was truly made by collective idiots. It went straight down the Memory Hole. But the outrage was muted, and except for the unfortunate (for him) fact that Taylor Kitsch starred in both films, the failure of "Battleship" was not taken as personally as "John Carter" seemed to be. Where was the outrage that attended the release of "John Carter"? It’s tragic to see one of the good guys – and Stanton is definitely one of those good guys – getting mauled for biting off more than he could creatively chew. "John Carter" is art-house cinema with a capital “A.” And let’s face it. It isn’t like Disney was going to spend those $200 million bucks on 50 Joyce Carol Oates adaptations.

Now in many ways, on many corporate “do-be” lists, Clint Eastwood is the anti-Stanton. Known for instinctively shying away from any budgetary excess, Eastwood is a filmmaker who has made a cult of understatement and fiscal prudance. So for this reason, it is hard to imagine that Eastwood and Stanton would have much to talk about. But Stanton might want to seek him out. For Eastwood has managed to make the system work for him in a way that still allows him to express his visions. Sometimes they hit and sometimes they miss, but the man almost always gets the job done.

The same week that "John Carter" had its DVD debut, a pristine BluRay of Eastwood’s "The Outlaw Josey Wales" was released. This is a film with an explicit connection with "John Carter," an inspiration Stanton has freely acknowledged.

In this revenge fantasy, Clint Eastwood plays, well, Clint Eastwood. This time, as a stoic Civil War hero, whose entire existence was truncated by the death of his wife and child, a child in this case that was played by his son, Kyle. One of the films most powerful moments is when Eastwood buries them, and collapses next to the crude wooden cross. This scene is duplicated almost shot for shot in "John Carter," but I don’t think that I will be going too far out on a limb by saying that Taylor Kitsch is no Clint Eastwood. Yet the films overlap like a kind of desert hologram, with the landscape of "Josey Wales" identical to that of "John Carter." Both follow in the frames of John Ford’s monumental Monument Valley travelogues. Both films are unmoored from much story logic, and both are based on pulp novels, written by self-conscious carriers of the White Man’s Burden. Forrest Carter, who wrote the novel that "Josey Wales" is based upon, was a far more toxic racist – and thankfully, the late '70s school of earnest liberal filmmaking that informs "The Outlaw Josey Wales" wipes that stench away. This is part revenge-fantasy, part humanistic, utopian fantasy as Eastwood builds a surrogate family at the same time as he blasts away everyone who gets in his way. Chief Dan George plays the Yoda role here, and the once and forever dean of Faber College, John Vernon, is terrific as Eastwood’s conflicted nemesis.

The films original director and co-screenwriter, Phil Kaufman, clashed with Eastwood over two things: Kaufman’s “Stanton-esque” perfectionist working habits, and the romantic attentions of Sandra Locke. Eastwood would win both battles, but would ultimately lose the war to Locke later on, when the two had a spectacularly messy falling out. Ironically, it was Eastwood who set Michael Cimino upon his quest for epic failure immortality, when he enlisted him to direct 1974’s "Thunderbolt and Lightfoot." I am sure it is to Cimino’s everlasting chagrin that he did not learn from the master.

There is another epic fantasy besides "John Carter" that hardwires directly to "The Outlaw Josey Wales" -- Stephen King’s lifework "The Dark Tower." If King during his acid years didn’t mainline "Outlaw Josey Wales" whilst under the influence and incorporate its cast, setting and essence in his first and subsequent "Dark Tower," books, well, maybe Disney should get right on that "John Carter" sequel. Sooner or later, these eight (and counting) books will be the subject of an endlessly debated adaptation. Rest assured that most of those will revolve around fanboy wishes that Clint Eastwood be put in a “Way Back” machine and cast in the role of Roland Deschain. So many settings from "Josey Wales" are embedded in the "Dark Tower" that the similarity cannot be entirely coincidental. The surrealistic, minimalist Ghost Towns, the relentless gathering of the Gunslinger’s companions, the empty blasted landscape they navigate, all make "Josey Wales" seem like an earlier, and hopefully not superior, first draft of the "Dark Tower" films-to-be.

Stephen King, Clint Eastwood and Andrew Stanton are three American Artists who are warriors for their work. And all three have had to endure the flung White Ape poo of critics and audiences when their reach exceeded their grasp.

This hasn’t stopped King and Eastwood, and let’s hope that Andrew Stanton gets a chance – and can grab onto $200 million more dollars of that money that has subsidized so many lesser filmmakers. Hey, maybe Andrew Stanton should direct those incoming "Dark Tower" films. You do know his heart will be in it, and sometimes, heart is enough.

Hmm. Now that I think about it, I’d love to see 50 filmed adaptations of the works of Joyce Carol Oates. Any ideas for which book Disney should tackle first? Let me know in the comments!