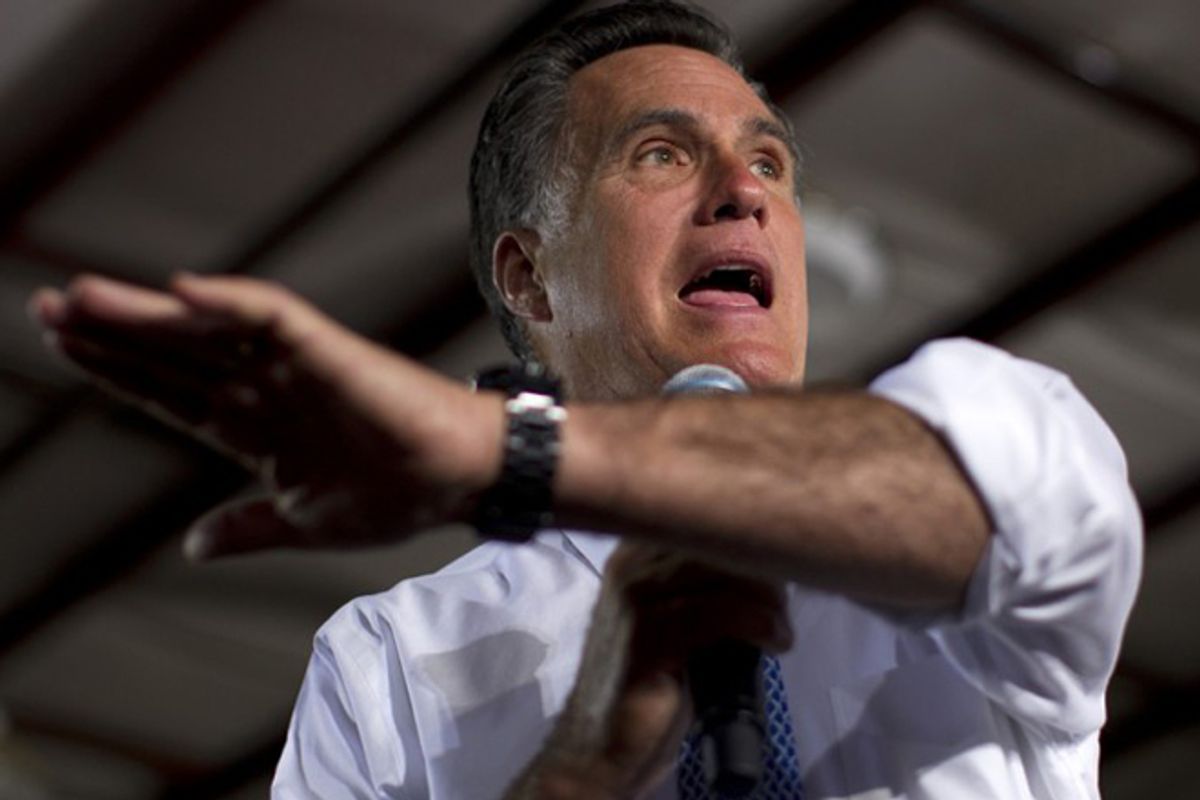 Why are movement conservatives so uneasy with Mitt Romney? Is it because of his past statements defending a woman's right to choose an abortion and his previous declaration that he's a "progressive"? Is it because of his record mounting a campaign against corporate tax loopholes -- one more aggressive than almost any other politician in both parties? Or is it simply because he governed one of the most liberal states in the country -- a state whose liberal policies (despite the Obama campaign's efforts to mimic George H.W. Bush's 1988 assault) make it one of the nation's best, according to most empirical measures?

All of that probably has something to do with it -- but it doesn't explain the whole story. Policy-wise, Romney has campaigned for president as a lockstep movement conservative, discarding or outright renouncing most of his previously left-leaning positions. That suggests if he wins, he knows he will owe his victory as much to the conservative movement as any prior Republican candidate -- and he will likely deliver for that movement as payback. That's because policymaking is less an expression of lawmakers' personal preferences and much more a reflection of the demands of coalitions who put politicians in office.

Considering this, Romney should be the conservative movement's dream candidate. He is an opportunist who has shown himself more willing to be reprogrammed by the movement than almost any other candidate before him -- which means there's little reason for conservatives to believe any contravening personal principles (if they exist) will direct his decisions in the White House.

And yet, judging by the posture and linguistic tenor of conservative leaders, the right remains wary of Romney, which means their wariness must not be only about policy. It must have something to do with Romney's willingness to rhetorically contradict some of the right's most tenaciously guarded tropes -- and those tropes are far more integral to the movement's survival than even policy itself.

Remember, if the conservative movement has been a tank barreling over the country, then that tank's fuel is not legislation but mythology. With stories of rogues and individualists and bootstraps and lazy welfare queens (to name a few), the tank continues to move forward, pulverizing everything in its path. But without apocrypha, the tank grinds to a halt.

Romney, therefore, is likely seen by conservatives as a politician who threatens to undermine that cherished mythology -- and the perception isn't necessarily wrong. With months still left in the election campaign, he's already made four public statements challenging the fundamental assumptions of the conservative narrative.

1. Romney admits that his family's success relied on the government: Back in April, the mediasphere was ablaze with allegations that Romney's ancestors practiced polygamy -- but the real news in the whole tiff had nothing to do with Mormonism and everything to do with economics. Indeed, in addressing the allegations, Romney explained that his family escaped the Mexican revolution and "went to El Paso first, and were helped by the government to get on their feet." In one rhetorical swoop, he contradicted anti-government, hyper-individualist Ayn Randism, admitting both that the government can play a positive role in family life, and that it can specifically help lift up families for future success.

2. Romney admits that cutting government spending will harm the economy: During an interview with Time magazine's Mark Halperin, Romney slipped in a jab to fellow Republicans who insist that slashing government spending is an automatic boon to the economy. "If you take a trillion dollars, for instance, out of the first year of the federal budget, that would shrink GDP over 5 percent," he said. "That is by definition throwing us into recession or depression, so I'm not going to do that, of course." A gossip-obsessed pundit, Halperin didn't think to ask a follow-up question on the substance -- or even flag the statement as news. But there it was: a Republican presidential nominee admitting a taboo truth about the stimulative nature of government spending, one that contradicts the entire conservative narrative.

3. Romney says we should fix and preserve the social safety net for the poor, and not worry about the super-wealthy: In early February, Democratic operatives, television pundits and talk radio hosts made hay out of Romney's CNN interview in which he said, "I'm not concerned about the very poor." It was cited as yet more proof that he doesn't care about the non-rich. But the rest of his statement was just as newsworthy. He explained that he's not concerned because "we have a safety net" for the destitute and that if the safety net "needs repair, I'll fix it" -- a pledge that directly counters the GOP's four-decade effort to eliminate social programs. He also went on to contradict the conservative mythology about the persecuted billionaire, insisting, "I'm not concerned about the very rich -- they're doing just fine."

4. Romney says government's role is to "help" families: In an interview with Fox News (of all outlets), Romney first vaguely likened himself to liberal lions Franklin Delano Roosevelt and John F. Kennedy, and then argued that when it comes to government, "the real need in America is to help middle-income families get good jobs with rising incomes and more security and help people who are poor come out of poverty and become middle income." That's right, he didn't parrot Reagan's line that "government is the problem," nor did he mimic the Gipper saying, "The nine most terrifying words in the English language are, 'I'm from the government and I'm here to help.'" On the contrary, he explicitly contradicted that conservative movement narrative, saying said government exists to "help."

As noted, the Political Media Machine wholly ignored the real news in each of Romney's aforementioned statements; took them out of context for partisan purposes; and/or turned them into headlines about less relevant issues (his Mormon ancestry, etc.). But despite that misdirect, it's fair to assume conservative movement leaders heard the real message loud and clear -- specifically, they heard a Republican presidential nominee indicting the suppositions on which conservative mythology is based.

That doesn't mean Romney's rhetoric foreshadows a liberal Romney White House, should he win the 2012 election. Nor does it mean Romney's archconservative campaign platform comports with these moderate (and fact-based) statements. But it does substantiate conservative leaders' concern that, at least rhetorically, a President Romney might not be the committed mythmaker (read: liar) conservatives want and so desperately need.