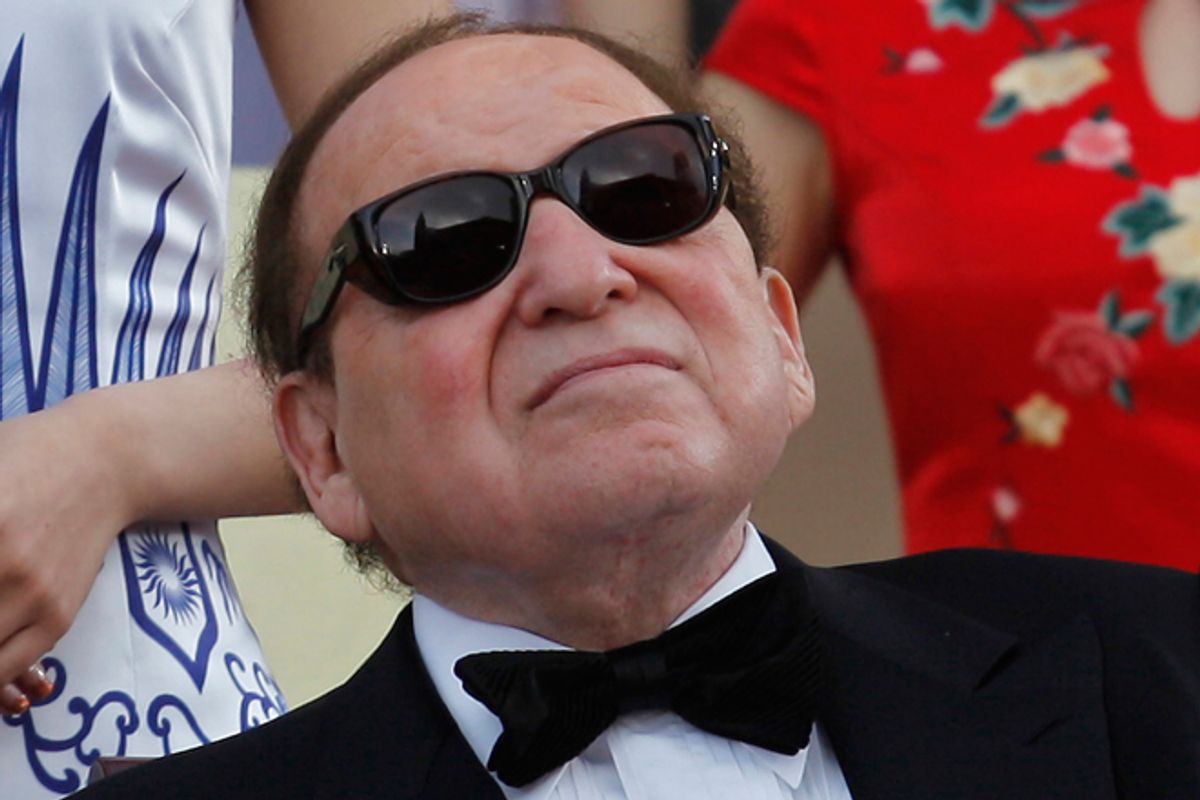 Few people have been more vilified by the right than George Soros, the billionaire financier who spent millions trying to defeat George W. Bush in 2004. He’s been the subject of a borderline anti-Semitic expose by Glenn Beck, been called “evil” by conservative blogs, and seen his name become an epithet to attack people who may or may not be tied to the secretive mega-donor. All this thanks to his deep-pocketed crusade against Bush and other conservatives.

But George Soros is about to get completely blown out of the water by Sheldon Adelson, the casino mogul and conservative mega-donor. In 2004, Soros gave $23.7 million to a handful of outside political groups called 527 organizations, which were the state-of-the-art in campaign finance at the time, making him the largest donor to the outside groups that year.

It’s only June, but Adelson has already surpassed Soros’ record from eight years ago in donations to outside groups. In fact, he may have passed it a while ago, since by late March, Adelson and his wife had already contributed $21 million to the super PAC backing Newt Gingrich, keeping the former speaker’s campaign afloat for months past its due date.

Now, the Wall Street Journal’s Alicia Mundy and Sara Murray report today that Adelson is prepared to chip in $10 million to the super PAC backing Mitt Romney, with much more where that came from. Adelson has apparently already made two more contributions above $10 million, ABC News reported, but he would not reveal the amount. The Las Vegas hotelier has told friends he intends to spend at least $100 million helping conservatives get elected in this cycle alone.

Meanwhile, the Miami Herald reported yesterday that Adelson gave $250,000 to the PAC of Florida Gov. Rick Scott, who is currently battling the Department of Justice over his effort to purge voter rolls in the state. Adelson gave another $250,000 to Wisconsin Gov. Scott Walker’s recall campaign earlier this year. And on top of that, he and his wife gave $5 million to a super PAC working to elect Republicans to Congress, the Congressional Leadership Fund.

Bob Biersack, a senior fellow at the Center for Responsive Politics, agreed the comparison is "parallel," noting the different types of groups (527s versus super PACS) reflect the different campaign finance regimes of each cycle.

And that doesn’t include anything Adelson may have given to so-called dark money groups, like 501(c)4s, which don’t have to disclose their donors at all. In April, Adelson, apparently frustrated with the public scrutiny he’s received, told the Las Vegas Sun, “I’m going to give one more small donation -- you might not think it’s that small -- to a SuperPAC and then if I give it will be to a c4.” If Adelson makes good on his promise to spend $100 million, he’ll quadruple Soros’ record. We also don’t how much he may have bundled for Romney, because Romney is the first candidate in over a decade who has refused to disclose that information.

Romney met with Adelson last month in Las Vegas, which was overshadowed by Romney’s other big confab that day, with Donald Trump. It would be illegal for Romney to request a donation from Adelson to his Restore Our Future super PAC in excess of the amount donors can give directly to candidates -- $5,000 -- so some transparency watchdogs have called on Romney to disclose more information about that meeting.

Meanwhile, there's an argument to be made that the infamous Koch brothers surpassed Soros a while ago.

And where is Soros this year? Almost nonexistent. He was largely turned off to electoral politics after Bush was reelected in 2004 (and one of his groups received a massive fine from the FEC for excessive contributions). In 2012, he's pledged just $2 million to support President Obama's reelection, a significant amount, but a pittance compared to what he could give.

So will conservatives give up the George Soros bugaboo? Don't hold your breath.