Call me the greatest American novel

"Moby-Dick" not only bests "Huck Finn," it's the novel that best captures our spirit -- and named that coffee chain 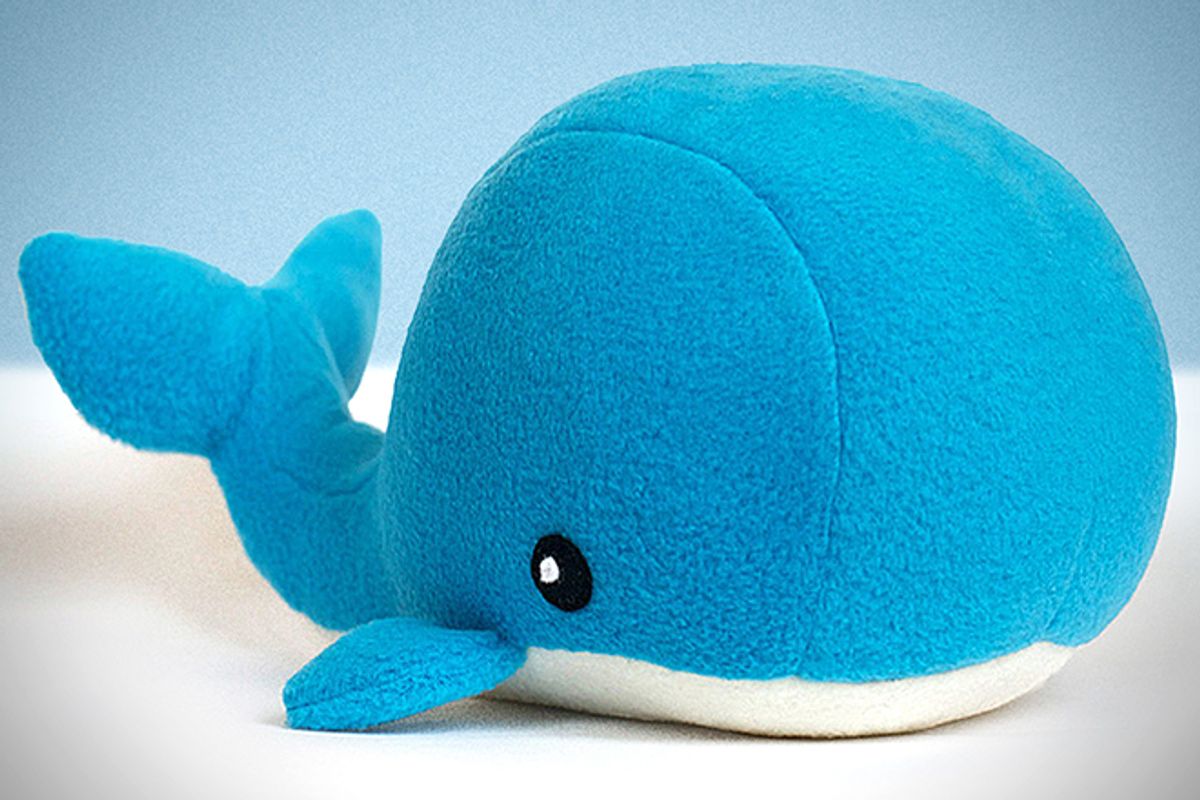 "Trust me on this" is probably the worst way to begin any paternal advice -- about anything, much less culture.

I came of age when the mantra was, "Don't trust anyone over 30." I will shortly turn 60, which means mathematically that I am now doubly untrustworthy.

But since you asked ... why don't we dispense with the following?

1.) The Bible (necessary to know even if you are agnostic or non-theistic).

2.) The U.S. Constitution (a grand document for which I am on-my-knees grateful, though I must admit that it has been, uh, a while since I looked into it).

3.) "The Star-Spangled Banner" (you can hum along or read the lips of the person next to you, unless you are a famous person and have been asked to sing it before the Super Bowl, in which case, better memorize the damn thing).

4.) The New York Times (which some of my more crotchety right-wing friends insist that they no longer read, but is absolutely necessary on a daily basis if you want to consider yourself well-informed about our world).

Let's assume, then, that you already know about these -- or that you at least know enough about them to feel incredibly guilty that you do not know more. Which leaves me free to say to my three children -- and everyone else's children, for that matter -- that I hope, my darlings, that you will take as much pleasure from the book that has always been to me the great American novel, "Moby-Dick."

For starters, note the hyphen. About 80 percent of people -- even literate and smart ones -- omit the hyphen. Score points! Even if you have not read the novel, you can now say to them, the way annoying James Joyce fanatics (is there any other kind?) harp on the fact that "Finnegans" is not possessive.

Most people, indeed smart, literate and nice ones, will tell you that "Huckleberry Finn" is the great American novel. Remain aloof! Be polite, of course, but adopt a knowing look. Smile. Tell them, "Well, [pause] if that's your kind of thing." Quote Abraham Lincoln, who read "Moby-Dick" but not "Huckleberry Finn" (through no fault of his own, dying as he did 19 years before it was published): "People who like this sort of thing will find this the sort of thing they like." (He wrote that in a book review -- not of "Moby-Dick.")

Most people probably come to the book too early, either in high school or freshman college English. I certainly did, and my reaction, on being dragged along on what seemed an interminable trip aboard the Pequod was, "Oy," or at best, "Whatever." (Though we didn't have that all-purpose shrug-word when I was young.)

Maniac whale? Fine. OK. "Call me Ishmael"? Um-hum. Why is that supposedly such a great first line? Would it still be great if it was "Call me Roger"? Two hundred pages on the difference between the Right Whale and the Humpback? Shoot me, please. Ahab? Clump, clump, clump. Look out, here comes Captain Debbie Downer!

Then in 1975 came a movie called "Jaws" and suddenly everyone was quite fascinated by the concept of a fish with the memory of an elephant -- and the size to boot -- and a fruitcake-nutty, but very focused sea captain. It's not taking anything away from Peter Benchley's great story to say that it owed a thing or two to a prior great American story, though Benchley was wise to leave out the 200 pages about different kinds of blubber.

From the opening line, the aforementioned "Call me Ishmael," to the novel's last line, "Then all collapsed, and the great shroud of the sea rolled on as it did five thousand years ago," "Moby-Dick" contains within it the most soul-stirring lines in American literature. (I typed the last line from memory and as a bona fide I won't look it up to see if I got it wrong; nor will I check the rest here.)

Consider the cast of characters.

The narrator, Ishmael, an American innocent in search of adventure at sea. What could be more American? What commerce is he now in pursuit of? Oil. What could be more American? The eventual discovery in Titusville, Pa., of the black kind that bubbles up out of the ground sounded the death knell of the Nantucket whaling industry. (Two of the whalers who left the island in search of new fortune were named Folger and Macy; if you drink coffee, you might have heard of the first; if you shop in Manhattan or like a parade on Thanksgiving, you've probably heard of the latter.)

Consider Ishmael's new friend Queequeg, the extravagantly tattooed harpooneer, a prince of his forsaken South Sea island. The unlikely friendship between these two, begun accidentally in a shared bed at the Spouter Inn, is one of the great friendships in American, or any, literature. A few months ago at a pub in Chelsea, London, I looked up from my pint and saw chalked on the wall: "Better to sleep with a sober cannibal than a drunken Christian." It's from that chapter when they first meet; their friendship was nothing if not multicultural, a forerunner of the other great celebration of diversity that took place between Huck and Jim on the raft.

Everyone in high school in my day read Herman Wouk's novel "The Caine Mutiny." The nutty captain in that book is, you'll recall, named Captain Queeg. He takes after Captain Ahab, not the noble Queequeg.

Consider, too, the chief mate of the Pequod, Starbuck. In a passage that never fails to bring tears to my eyes, the earnest Starbuck pleads with Ahab to abandon his blasphemous, vengeful quest for the white whale. It's in that paragraph that we see Ahab's mask slip, just long enough for a tear to roll down his scarred cheek and drop into the ocean.

"... nor was there in all the vast Pacific more wealth than in that one drop."

Sorry. Where were we? Starbuck. Yes, well, I think you've heard that name, somewhere.

Lest I roll on like the sea 5,000 years ago, consider finally the great theme of the book: Man's ontological struggle with God. As themes go, it's the Big One.

W.H. Auden wrote an amazing poem about Herman Melville. I'll try quoting it from memory, too, but you'll want to look up the whole poem for yourself. Trust me.

It's about how Melville could have played it safe and gone on writing popular adventure books in the style of "Typee" and "Omoo" ...

... The storm that blew him past the Cape of Sensible Success that cries 'This rock is Eden, shipwreck here,'
but deafened him with thunder and confused with lightning,
The maniac hero, hunting like a jewel the rare ambiguous monster
that had maimed his sex, hatred for hatred, ending in a scream.
The unexplained survivor, breaking off the nightmare.
All that was intricate and false, the truth was simple.

It's a great poem, and a very good key to "Moby-Dick" and its author.

Auden starts with this conjuring of Melville, a failed writer, now making his living as a customs inspector in Manhattan.

Toward the end he sailed into an extraordinary mildness,
And anchored in his home and reached his wife,
And rode within the harbor of her hand,
And each morning went across to his office,
As though his occupation were another island.

It's sad to consider that the book was critically and commercially a dud. (If you want to read some really savage book reviews, look up the ones that greeted "Moby-Dick." And smile.)

It earned him a total of about $500 in his lifetime. Even multiplying that into 2012 dollars doesn't quite mitigate the sting. But this aspect of Melville's failure with the book is perhaps ennobling. If it had been a runaway bestseller, like a much later novel about a Great White Shark, its reputation today might be different. Hard to say. What is beyond dispute is that its author swung for the fence, went for the Big One, risked everything to put his genius and all his art on the altar.

I carry but a small votive candle. Let Auden have the last word, from the last lines of his poem:

But now he cried in jubilation and surrender,
"The Godhead is broken, we are the pieces."
And sat down at his desk and wrote a story.

Christopher Buckley's latest novel is "They Eat Puppies, Don't They?" His many other novels include "Thank You For Smoking," "Little Green Men," "The White House Mess" and "No Way To Treat A First Lady." He is also the author of the memoir "Losing Mum and Pup."

Books Editor's Picks Parenting Trust Me On This