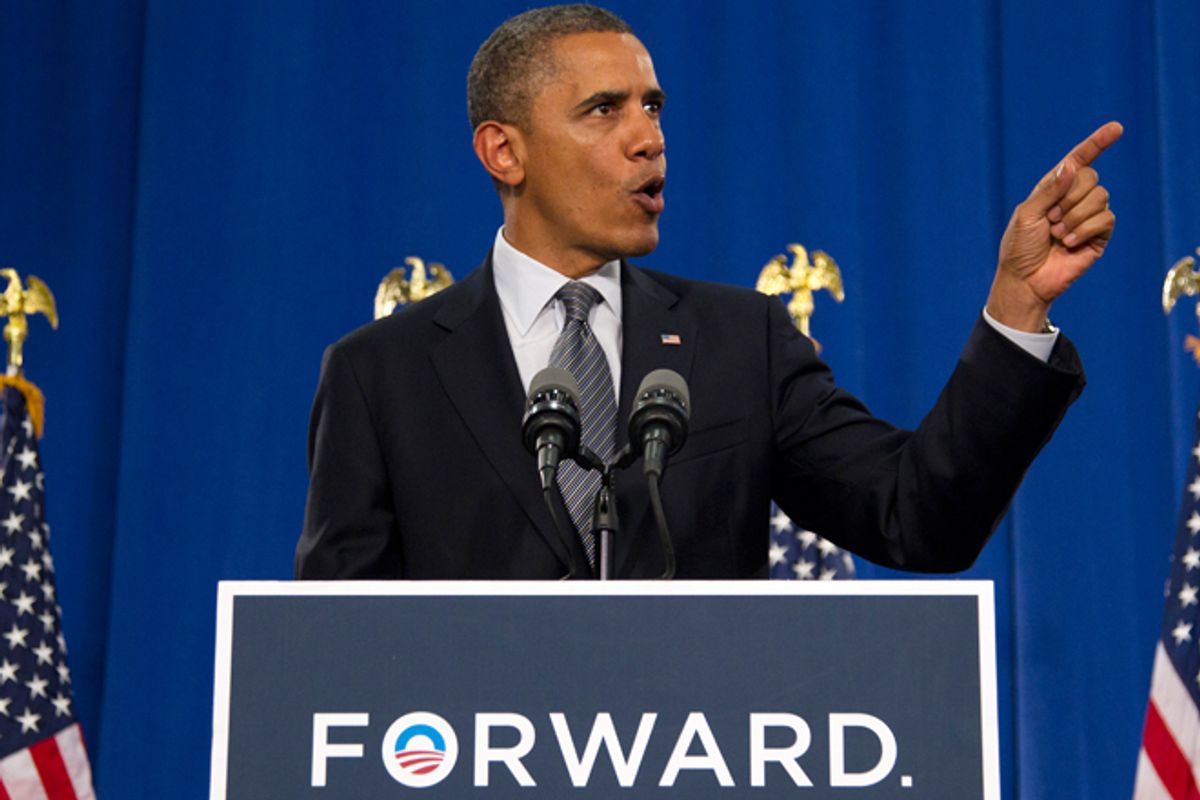 I'm not going to join other Democrats who are panicking in June about the November presidential election. Mitt Romney won't wear well on the wider electorate. These are the dog days, no pun intended. Things aren't that bad.

But I had two problems with the president's big Ohio speech today. He never mentioned Bain Capital, which may indicate that the Wall Street-friendly Democrats who jumped ship in the last month – Cory Booker, Ed Rendell and, most notably, Bill Clinton – won the debate. I hope that's not true. Maybe this was meant to be a different speech, more focused on the president's own vision, accomplishments and message.

But if that's the case, I don't understand why it was so larded with references to how he's going to cut government spending, as though that's the nation's most crucial problem. He used the word "deficit" 20 times and "debt" 10 times (not counting student and family debt references) in a speech ostensibly about a new Democratic message. That's his old message, the one that helped get him bogged down in last summer's debt-ceiling debacle.

I still haven't quite gotten over the graphs Ezra Klein used Monday night when subbing for Rachel Maddow on MSNBC, showing the rise in government employment after recessions under Ronald Reagan, George H.W. Bush and George W. Bush. Those Republican presidents were die-hard Keynesians, no matter what their rhetoric pretended, and they knew that the antidote to recession, and a contraction in business and consumer spending, was government spending, including government employment.

Now, Obama knows this too, and it's not as if he wanted that contraction in government employment – some 70 percent of job cuts came in Texas and other red states. It's not just congressional Republicans who are trying to thwart the president and tank the economy, it's their statehouse buddies, too. But he doesn't have to consistently accept GOP framing, and boast about reducing federal domestic spending to the lowest level since Dwight Eisenhower. He did it again today.

I hate to keep going back to the stimulus debate in 2009, but it's unavoidable. Had the president clearly explained the need for more government spending, and government employment, to keep the economy from going off a cliff, he might not have gotten a dime more from Congress, but he'd have been telling the truth to the American people and preparing them for what was to come. Instead he behaved as if what he got was enough to turn things around, and talked about "Recovery Summer" and "green shoots" and otherwise acted as though Congress had done its job in February 2009. It hadn't – and that was clear then.

There was a section of the president's speech today that I wish I'd heard back in 2009 (I know, he's said parts of this before, going back into 2007, but he hadn't told the story quite like this.) Here's how he laid out the years of bad corporate behavior (largely ignored by both parties) that led to the crash:

Long before the economic crisis of 2008, the basic bargain at the heart of this country had begun to erode.  For more than a decade, it had become harder to find a job that paid the bills -- harder to save, harder to retire; harder to keep up with rising costs of gas and health care and college tuitions.  You know that; you lived it.  (Applause.)

For the wealthiest Americans, it worked out pretty well.  Over the last few decades, the income of the top 1 percent grew by more than 275 percent -- to an average of $1.3 million a year.  Big financial institutions, corporations saw their profits soar.  But prosperity never trickled down to the middle class.

From 2001 to 2008, we had the slowest job growth in half a century.  The typical family saw their incomes fall.  The failure to pay for the tax cuts and the wars took us from record surpluses under President Bill Clinton to record deficits.  And it left us unprepared to deal with the retirement of an aging population that’s placing a greater strain on programs like Medicare and Social Security.

Without strong enough regulations, families were enticed, and sometimes tricked, into buying homes they couldn’t afford.  Banks and investors were allowed to package and sell risky mortgages.  Huge, reckless bets were made with other people’s money on the line.  And too many from Wall Street to Washington simply looked the other way.

For a while, credit cards and home equity loans papered over the reality of this new economy -- people borrowed money to keep up.  But the growth that took place during this time period turned out to be a house of cards.  And in the fall of 2008, it all came tumbling down -- with a financial crisis that plunged the world into the worst economic crisis since the Great Depression.

But even after that correct diagnosis, Obama didn't define and defend the role of government spending in turning things around. What happened next?

Here in the United States, Americans showed their grit and showed their determination.  We acted fast.  Our economy started growing again six months after I took office and it has continued to grow for the last three years.

Really? Was it magic? Or did the $787 billion Recovery Act (40 percent of which was tax cuts, by the way) play a role? You're getting blamed for the spending already, Mr. President, why not take credit for what it accomplished?

He wrapped up the speech with a lovely peroration on how the postwar bipartisan consensus on the role of government helped build the middle class. It's always worth pointing out how far the Republican Party has drifted to the right. But Obama is still treading carefully around the specific role of government today -- in his own stimulus package and even in his jobs plan. He should tell the truth about what he's doing, and why it's going to work.